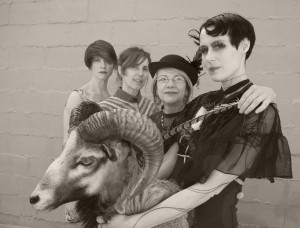 Hudson, N.Y. — Hudson’s own Dust Bowl Faeries, a gothic chamber-folk outfit led by interdisciplinary artist Ryder Cooley, will celebrate the release of its eponymous debut album at Club Helsinki Hudson on Sunday, March 6, at 8 p.m. The band will be joined by a handful of guest musicians who appear on the album, which was funded by a successful $10,000 crowd-funding campaign on Indiegogo and will be released independently.

The album was produced by Seth Rogovoy; recorded by Tommy Stinson and composer-drummer Bobby Previte; and edited, mixed, and mastered by Rachel Alina.

Great Barrington — Bard College at Simon’s Rock’s Faculty Recital Series will offer a program featuring the flute on Sunday, March 6, at 3 p.m. in the Kellogg Music Center. Guest flutist Diva Goodfriend-Koven will perform along with faculty members Anne Legêne on cello and Larry Wallach on piano. The program will include trios by Joseph Haydn and Louise Farrenc as well as works for the flute and piano by Bohuslav Martinu and Olivier Messiaen. The event is free and open to the public.

In addition to her solo career as a chamber music recitalist, Diva Goodfriend-Koven plays the flute and piccolo worldwide with major orchestras. She regularly appears as an associate musician with the Metropolitan Opera orchestra and the New York Philharmonic. She is a member of the American Symphony Orchestra, American Ballet Theatre orchestra, American Composers Orchestra, and the Locrian Chamber Players. As a soloist in the U.S. and abroad, Goodfriend-Koven has performed with the Orpheus Chamber Orchestra and the New York Symphonic Arts Ensemble. She has also toured with the Metropolitan Opera in both domestic and international venues.

March events at the Mahaiwe

Great Barrington — The Mahaiwe Performing Arts Center will present HD broadcasts by the Bolshoi Ballet, London’s National Theatre, and the Met Opera in March, as well as educational programming for children.

Jacob’s Pillow Dance Festival Director of Preservation Norton Owen will speak at 12:40 p.m. before the 1 p.m. Bolshoi Ballet of “Spartacus” on Sunday, March 13. Academy Award-winner Martin McDonagh stars in the London’s National Theatre in HD production of Matthew Dunster’s “Hangmen,” showing on Sunday, March 20, at 3 p.m. The Met Opera Live in HD production of Puccini’s “Manon Lescaut” will be shown on Saturday, March 5, at 1 p.m. with an encore presentation on Wednesday, March 16, at 1 p.m. Scholar Scott Eyerly will continue his series of pre-opera talks two hours before the live broadcast.

On Friday, March 11, at 10 a.m., the Mahaiwe will present a school field trip production of Imago Theatre’s “ZooZoo” which mixes acrobatics and mime. For tickets to Mahaiwe school field trip events, contact Judy Reinauer at (413) 644-9040 x103 or education@mahaiwe.org.

For more information on and tickets to upcoming Mahaiwe events, see the Berkshire Edge calendar or call the Mahaiwe box office at (413) 528-0100.

Housatonic – The theme for Week Nine of Ramsdell Public Library’s Winter Sunday Afternoons is art, and the activities for Sunday, March 6, will begin with a free 1 p.m. workshop led by Adam Gudeon entitled “How To Tell A Story In Pictures: Create a Multi-Paneled Storyboard.” Through the workshop Gudeon will demonstrate how a series of thumbnails showing the key scenes, settings, and characters can be constructed to map the story for a video, book, or cartoon. At 2 p.m. the Library will screen the 2014 documentary film “The Great Museum.”

The library will be open for business as usual from 1 p.m. to 4 p.m. with coffee, snacks, Sunday papers, and crosswords. Contact the Library for more information at (413) 274-3738.

Participants will learn about snowshoe equipment and safety before heading out for a ramble through wetlands and gentle slopes. Participants are encouraged to dress warmly and in layers and to bring snowshoes if able. A limited number of adult and child snowshoes will be available if reserved ahead of time.

The cost of the hike is $15 for non-members, $10 for members, and free for children. Registration for the hike is required. Call (413) 637-0320 to register. The hike will take place regardless of whether or not there is snow on the ground.