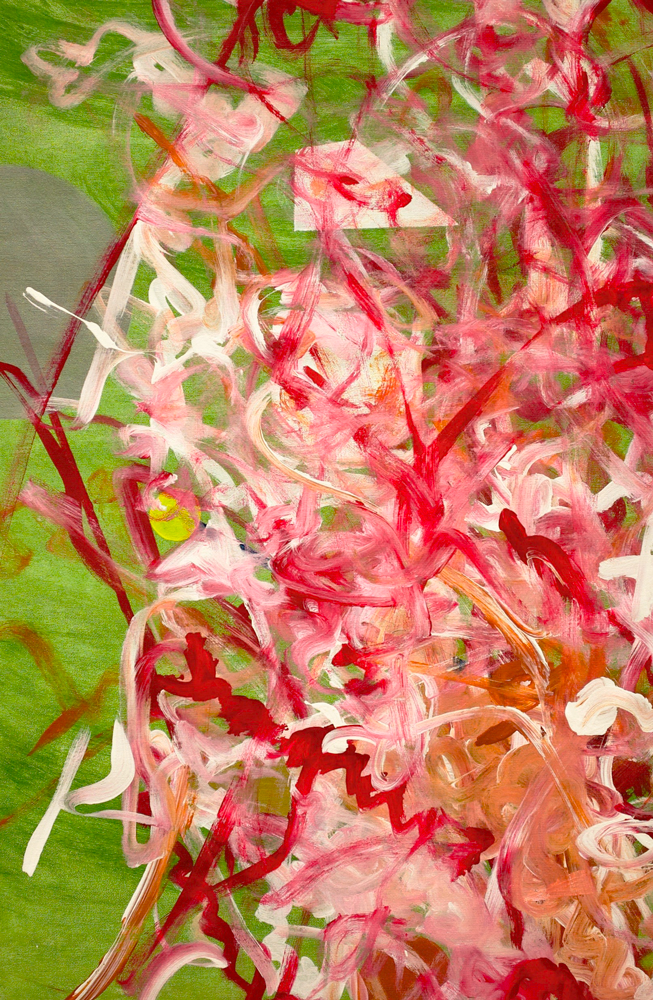 Hudson, N.Y. — Community Access to the Arts will present “Earth People,” an exhibit of paintings by artists with disabilities at Hudson Hall. An opening reception will be held Thursday, March 12, from noon to 2 p.m. with many of the artists in attendance.

The exhibit features work by 11 artists from Columbia County Arc who create their work through Community Access to the Arts programs using the adaptive Artistic Realization Technologies painting technique. The A.R.T. adaptive technique, developed by artist Tim Lefens, gives full artistic control to people with profound physical disabilities who do not have the dexterity to apply paintbrush to canvas.

Says CATA executive director Margaret Keller: “Artists at Coarc began participating in CATA’s adaptive painting workshops several years ago. Working one-on-one with Stefanie Weber, a CATA faculty artist and trained A.R.T. tracker, each artist has created profoundly expressive work. The energy and vibrancy of this work speaks for itself. We’re thrilled to share it with our community.”

“Earth People” runs through Sunday, April 5. All works in the exhibit are professionally matted, framed and available for sale, with proceeds supporting commissions for individual artists. For more information, contact Community Access to the Arts at (413) 528-5485 or info@CATAarts.org.

Editor’s note: As of Thursday, March 12, this event has been postponed to a later date yet to be determined.

Chatham, N.Y. — The Crandell Theatre will host Farm Film Fest 12 Sunday, March 15, from noon to 4 p.m. The festival will screen films that educate and entertain about farms, farming, farmers, and farming issues both local and national. The theme this year is “Farming for the Future: Sustainability in a Time of Change.”

The first film, “Conservation Generation” by the National Young Farmers Coalition, offers a look into the lives of four young farmers and ranchers in the arid Southwest. “The River That Flows Both Ways” uses a visit to the Hawthorne Valley Farm in Ghent and a trip to the Inwood Greenmarket in Manhattan to illuminate the link between rural and urban Hudson Valley life. Shot in Dutchess and Columbia counties, “Keeping Carbon” focuses on the importance of carbon: when balanced, in its right place, it’s critical to the biosphere; when out of balance and in the wrong place, it has dire consequences. Two films address the edible end of farming: “Edible Uprising” looks at the biointensive farm by the same name operating in Troy; “Brooklyn Bugs: Evolving Our Taste for Edible Insects” introduces Joseph Yoon, chef and executive director behind Brooklyn Bugs, an organization that promotes and advocates edible insects as the future of food.

The festival’s feature film, “In Our Hands,” reflects a growing movement to create vibrant farms, living soils, thriving food markets and a fairer food system for all. The film tells the story behind the the British farmers who are outgrowing the industrial food system in the wake of Brexit. The film was made in association with the Landworkers’ Alliance, a union of farmers, growers, foresters and land-based workers with a mission to improve the livelihoods of its members and create a better food and land-use system for everyone.

A post-film discussion will be moderated by botanist Daniel Franck, Ph.D., science curriculum director at the Core Knowledge Foundation. Participants will include Columbia Land Conservancy farm program coordinator Terence Duvall; Jon Bowermaster of Oceans 8 Films; Henry Corsun of Dog Wood Farm and Rock City Mushrooms; and a representative of the National Young Farmers Coalition. The festival will be followed by a “Meet Your Maker” reception at the People’s Pub with complimentary snacks featuring local foods, as well as a cash bar.

Farm Film Fest is free and open to the public. Cash donations are welcome, as are donations of nonperishable food items for the Chatham Area Silent Food Pantry. For more information, contact the Crandell Theatre at (518) 392-3331 or mail@crandelltheatre.org.

The Irish Comedy Tour to visit the Colonial Theatre

The Irish Comedy Tour is a high-energy show that takes the party atmosphere of a Dublin pub and combines it with a boisterous band of hooligans. The comedians, whose ancestors hail from the Emerald Isle, include Detroit native Derek Richards; Boston-born Mike McCarthy; Nova Scotia’s Damon Leibert; and Derrick Keane from Dublin suburb Inchicore. The group recently released the comedy special “The Irish Comedy Tour” through major streaming outlets. Pre-show entertainment in the Garage by Brian Benlien will begin at 6 p.m.

Tickets are $25. Attendees must be at least 16 years old. For tickets and more information, see the Berkshire Edge calendar or contact Berkshire Theatre Group at (413) 997-4444.

Written and directed by John de Graaf in 2019, the film explores the concept of cohousing, an intentional community of private homes clustered around shared space. The story profiles four cohousing communities in Northern California, including the first one in the United States and a senior community. The film features architect Charles Durrett, who brought the concept of cohousing to the United States from Denmark. Following the film, BCLT will facilitate a conversation about regional opportunities for housing that’s affordable for young families and retiring seniors.

The screening is free and open to the public with a suggested donation of $10 or 10 BerkShares. To RSVP or for more information, contact Berkshire Community Land Trust at (413) 528-4472 or office@berkshirecommunitylandtrust.org.