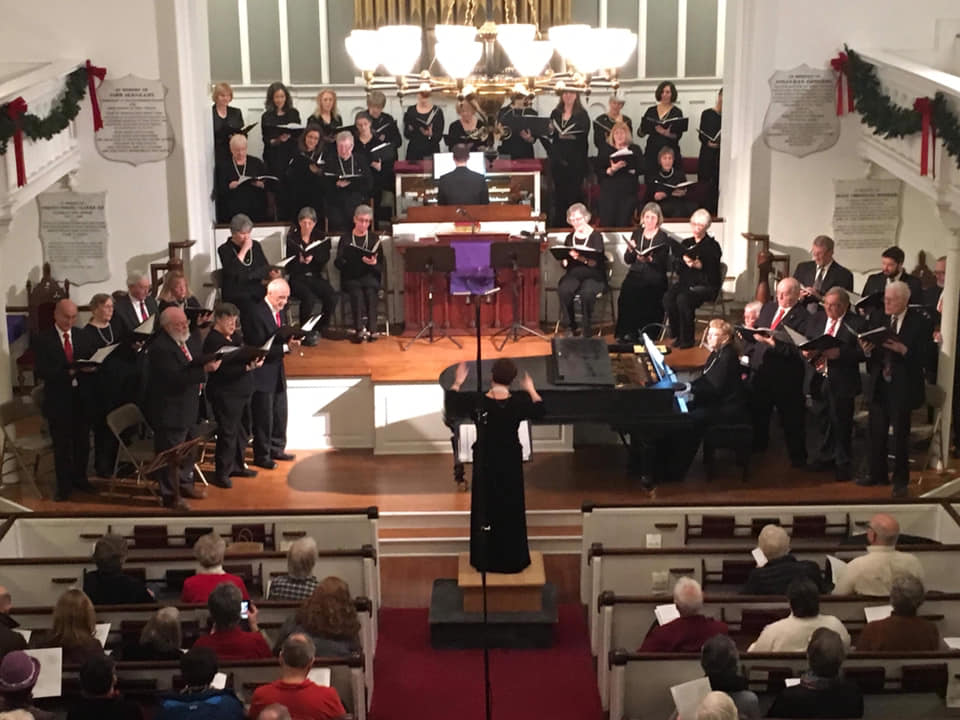 Stockbridge — The Stockbridge Festival Chorus will present Maurice Duruflé’s Requiem and “Quatre Motets sur les Themes Gregoriens” Saturday, April 27, at 5 p.m. at the First Congregational Church of Stockbridge. A reception to meet the artists will follow this concert. A second performance will be given Saturday, May 4, at Zion Lutheran Church in Pittsfield.

The 45-voice chorus is directed by Tracy Wilson. The vocal soloists are mezzo-soprano Marjorie Dix and baritone John Demler. Also performing will be cellist Beth Craig, timpanist Bailey Forfa, organist Tim Weisman and pianist Lee Dixon. The Requiem, Op. 9, is a setting of the Latin Requiem with thematic material mostly taken from the Mass for the Dead in Gregorian chant. “Four Motets based on Gregorian themes” was composed in 1960 and first performed at the Eglise Saint-Merri in Paris. The Four Motets include “Ubi Caritas,” “Tota Pulchra es Maria,” and “Tu es Petrus.” The text of the final motet, “Tantum Ergo Sacramentum,” was written by St. Thomas Aquinas, (1225-1274) and has been used in church services since the Middle Ages.

There is a suggested donation for each concert of $20 for adults and $10 for members of other Berkshire community choruses. The concerts are free for youth ages 18 and under. For more information, call (413) 298-3137.

Great Barrington — The Berkshire Bach Society will present nine-time Grammy Award winner Eugene Drucker, in a program of solo violin music by J.S. Bach and Paul Hindemith Saturday, April 27, at 5 p.m. at the First Congregational Church, 251 Main St. A meet and greet with Drucker will follow the recital.

Emerson String Quartet co-founder Drucker will perform Bach’s Sonata No. 1 in G minor, BWV 1001; Sonata No. 3 in C Major, BWV 1005; and the Partita No. 2 in D minor, BWV 1004, concluding with the great Chaconne. The program also includes the slow movement from Paul Hindemith’s Sonata for Solo Violin, Op. 31, No. 1, which bears a resemblance to the Prelude of Bach’s third Sonata. Last fall, Drucker presented the same program at the Smithsonian Institution in Washington, D.C. Drucker will perform the concert on his Stradivarius, which was made in 1686, the year after Bach was born.

Tickets are $25–$50, and free for youth under age 18 and students with ID. For tickets and more information, see the Berkshire Edge calendar or contact the Berkshire Bach Society at (413) 528-9555 or info@berkshirebach.org.

Ted Rosenthal Trio to show how ‘Jazz Meets the Classics’

Pittsfield — In cooperation with ArtWeek, Berkshires Jazz will present the Ted Rosenthal Trio Saturday, April 27, at 7:30 p.m. at the Berkshire Museum. Titled “Jazz Meets the Classics,” Rosenthal’s program will demonstrate the influence that classical music has had on the modern music scene and include selections he will play with the Kids 4 Harmony Elayne P. Bernstein Octet.

Jazz pianist Rosenthal has performed worldwide as a leader and as a sideman with many jazz greats. His classical/jazz crossover performances include solo and featured appearances with the Boston Pops, the Baltimore Symphony Orchestra, the Kansas City Symphony and many other orchestras. His work includes adapting themes by Brahms, Schumann, Tchaikovsky and others into a mainstream jazz idiom. In addition to Rosenthal on piano, the trio comprises Thomson Kneeland on bass and Tim Horner on drums.

The Elayne P. Bernstein Octet is the most advanced ensemble in Kids 4 Harmony, an afterschool music program operated by Berkshire Children and Families. Members have appeared in large and small events from Boston to Los Angeles, including the national Take A Stand Orchestra under the baton of maestro Gustavo Dudamel. They have performed three times locally with classical pianist Emanuel Ax as well as participating in Tanglewood on Parade.

The concert will be preceded by an optional beverage service and wine tasting at 6:30 p.m. Attendees are invited to meet the musicians after the concert. Tickets are $25 in advance and $30 on the day of the event. For tickets and more information, see the Berkshire Edge calendar or call the Berkshire Museum at (413) 443-7171.

Undaunted by new forms or frontiers, Muskal has written everything from pop songs to symphonies to her new opera-in-progress, which is set in the world of high fashion and tells the story of Diana Vreeland and Andre Leon Talley while examining the constant rises and falls of the industry. Her score for a historic silent film about the Mexican revolution, a song cycle commissioned by ASCAP, and music for a documentary film about finding a cure for blindness that was narrated by Robert Redford exemplify the diverse material and platforms she uses. Her work “The Yellow Wind,” based on the novel by Israeli author David Grossman, was nominated for a Pulitzer Prize. Muskal has received awards from ASCAP, Meet the Composer, American Music Center and the Fromm Music Foundation as well as a Guggenheim Foundation fellowship, with commissions from the 92nd Street Y, the Library of Congress, orchestras and ensembles.

Tickets are $20. For tickets and more information, see the Berkshire Edge calendar or contact Close Encounters With Music at (800) 843-0778, or cewmusic@aol.com.

Sandisfield — The Berkshire Children’s Chorus will present its annual benefit house concert Saturday, April 27, at 5 p.m. at the home of Susie Crofut and Benjamin Luxon. The event will feature hors d’oeuvres from Rubiner’s Cheesemongers, beer and wine from Domaney’s Liquors and Fine Wines, and a teaser concert by the chorus.

Since 1990, the Berkshire Children’s Chorus has welcomed children from throughout the Berkshires, Northwest Connecticut, and Columbia County, New York, into an environment of musical excellence, friendship and collaboration.

Tickets are $65. For tickets and more information, see the Berkshire Edge calendar or contact Ellen Maggio at (413) 528 4373 or maggio.ellen@gmail.com.