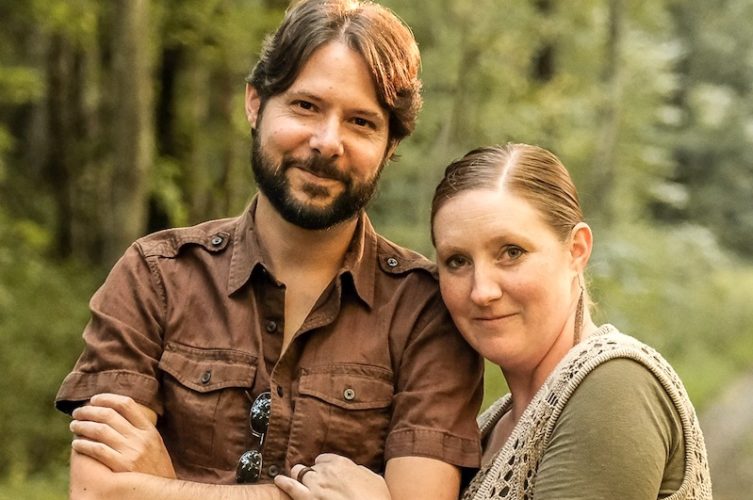 Folk duo Mark Mandeville and Raianne Richards, co-founders of the Massachusetts Walking Tour, will give a talk, followed by a Q&A session and a concert, at Dewey Hall on May 20. Photo courtesy Dewey Hall

SHEFFIELD — Dewey Hall will present Considering Your Community: Creating Successful and Enriching Public Events on Friday, May 20, from 7–9 p.m. The program will be led by regional folk duo Mark Mandeville and Raianne Richards, co-founders of the annual Massachusetts Walking Tour, a string of free community concerts and daily public hikes which takes place each June. The talk will be followed by a Q&A session and a concert by the pair.

This program will cover:

With a grassroots philosophy and a boot-lace budget, The Massachusetts Walking Tour (MWT) strives to celebrate local artists and to help raise awareness of recreational greenspace throughout the state while its core group of musicians walks with instruments along the chosen tour route. Since their first trek in 2010, Mandeville and Richards have gained valuable insight into organizing multifaceted community programming, coordinating people and resources toward a shared goal, large-scale DIY promotion, and locating modest funding to cover costs. They have been officially recognized in the congressional record for their efforts throughout the commonwealth. This June, the MWT will be performing in 10 towns along the Appalachian Trail, walking from Sheffield to North Adams, and participating in daily public hikes along the way.

Degas sculpture to be auctioned to benefit Volunteers in Medicine

GREAT BARRINGTON — The family of the late Peter Goodman — businessman, art collector and woodworker who kept homes in New York and Mill River — will be donating proceeds of an auction of a sculpture by famed impressionist Edgar Degas to Volunteers in Medicine Berkshires (VIM). The sculpture will be auctioned by Christie’s auction house as part of a sale of Impressionist and Modern works on Saturday, May 14. Bidding will take place at the Christie’s New York location and online during the afternoon session that begins at 2 p.m.

The piece to be auctioned is called “Femme assise dans un fauteuil, s’essuyant la hanche gauche,” or “Woman Sitting in an Armchair, Drying her Left Hip.” Degas conceived of the sculpture somewhere between 1896 and 1911. This bronze was cast in 1921 and represents an intimacy that was still quite groundbreaking in art at the time. According to Christie’s, “These bathers are a domestic counterpart to the images of ballerinas shown in the wings of the theatre or in rehearsal, captured between their formal routines, and therefore provides an intriguing sense of the reality that underlies art.” The auction house estimates the piece will sell for between $250,000–$350,000.

“VIM has never received a gift like this, and it is truly thrilling for us,” says Arthur M. Peisner, VIM’s board chair. “Peter and the Goodman family have been important friends, volunteers and supporters for many years, and we are humbled by their generosity, which makes it possible for us to continue to provide free healthcare to the people who would otherwise lack access.”

Elizabeth Goodman, a longtime Mill River resident and one of Goodman’s three children, said, “This Degas bronze has descended through our family, originally purchased by my grandparents, Herbert and Hortense Goodman, in the 1940s. My father, during his lifetime, amassed an extensive art collection. Now, having received the bronze from my parents’ estate, I’ve decided to add to his legacy by passing the proceeds to VIM, an organization whose good works have become vital in our community.” Elizabeth’s husband, Don Cook, volunteers with VIM as a mental health therapist.

Rena Tobey to host virtual talk on the Harlem Renaissance

GREAT BARRINGTON — Congregation Ahavath Sholom (CAS) will host a virtual presentation by Rena Tobey on the Harlem Renaissance, on Sunday, May 15 at 1 p.m. Tobey’s most recent online event with CAS was a tour of “The Hare with the Amber Eyes” exhibition at the Jewish Museum in New York City. As with the museum tours, the cost of this event is $20 for CAS members and $25 for non-members. Please register and make payment on the CAS website.

Harlem flourished in the 1920s, energized by the Great Migration of African Americans from the South who were looking for jobs in New York City. The first generation of photographers, painters, and muralists tapped into new calls for expressing racial pride and optimism; the second worked through the Depression and World War II, carrying on this inspiration and deepening the depictions. The Harlem Renaissance is still influencing artists of today.

Rena Tobey has taught art history at NYU’s School for Professional Studies and Southern Connecticut State University. She conducts interactive tours of museum collections, including the Metropolitan Museum of Art and the Jewish Museum, now via Zoom. She also provides online talks on American art and historical women artists for community organizations such as the New York Public Library and other major groups.

Free repair workshop to be held May 21 in Sheffield

SHEFFIELD — On Saturday, May 21, from 10 a.m.–1 p.m. at the Sheffield Town Park Pavilion, neighbors will be helping neighbors assess, disassemble and mend their necklaces, wooden items, jeans, sweaters, bicycles and computers. (No gas/oil machines, toasters or microwave ovens.)

Following the model of the Repair Café, volunteers from Sheffield Saves and Egremont Green are gathering local friends and neighbors to volunteer their skills at trouble-shooting personal items that need reasonably simple repair. The idea is to not have to replace broken items with new purchases.

Early-bird sign-up sheets will be available at the Sheffield and Egremont Town Halls, the Sheffield Senior Center, and Bushnell-Sage Library. Providing specifics will assist the fixers and menders to plan for materials or manuals to have on hand, to contact owners for additional information, and to order specific parts.

On May 21, volunteers at the registration table at the pavilion will match items and owners with fixers. With luck, fixers will suggest steps to take, including gluing, bending, tweaking, soldering, or replacing parts, along with estimated costs. By demonstrating possible repairs and coaching us to fix our own broken objects, they might even give people confidence to repair a few items on their own. Students from Mt. Everett Regional High School’s technology class will also host a Tech Table, with e-mail and call-in service available later.

With assistance from the Bushnell-Sage Library, a small D.E.P. grant to cover insurance, advertising, and minor equipment has been secured, and donations to defray some of the expenses will also be accepted. For more information, call Jenny Russell at 413-229-2549.

Cantilena Chamber Choir to present concert May 21 at Trinity Church 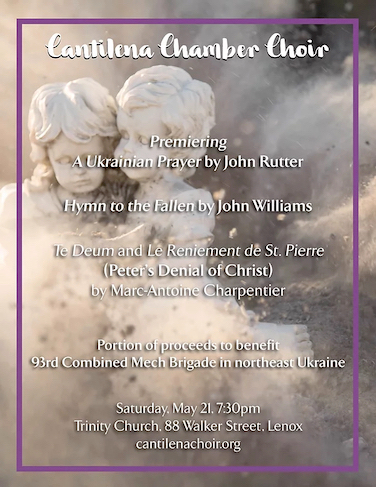 LENOX — The Cantilena Chamber Choir will present the “Te Deum” for choir and orchestra and the rarely heard “Le Reniement de St. Pierre” (Peter’s Denial of Christ) by Marc Antoine Charpentier, at Trinity Church in Lenox, on Saturday, May 21 at 7:30 p.m.

Also on the program is the beloved Cantata 147, “Herz und Mund und tat und Leben,” by Bach, and selections from the 2020 Grammy-nominated “Liturgy of St. John Chrysosdom” by American composer Kurt Sander.

Charpentier composed his grand polyphonic motet “Te Deum” (H. 146) in D major in 1698 during his stay at the Jesuit Church of St. Louis in Paris, where he held the position of musical director. The work was written for soloists, choir and orchestra, and features a famous and recognizable trumpet fanfare opening similar to the Masterpiece theater theme.

Also presented will be the lesser-known, rarely heard “Le Reniement de St. Pierre” (Peter’s Denial of Christ), made famous by the Parisian group Les Arts Florrisants. Selections from the “Liturgy of St. John Chrysosdom” by American composer Kurt Sander will have its local premiere. The work is a 21st century version of the Liturgy made famous by Rachmaninov and evokes his rich harmonic style of Russian repertoire, yet was composed in English.

Concert tickets are $25 adults, $20 students/seniors (65 and over), and free for children 12 and under. Trinity Church is located at 88 Walker Street in Lenox.