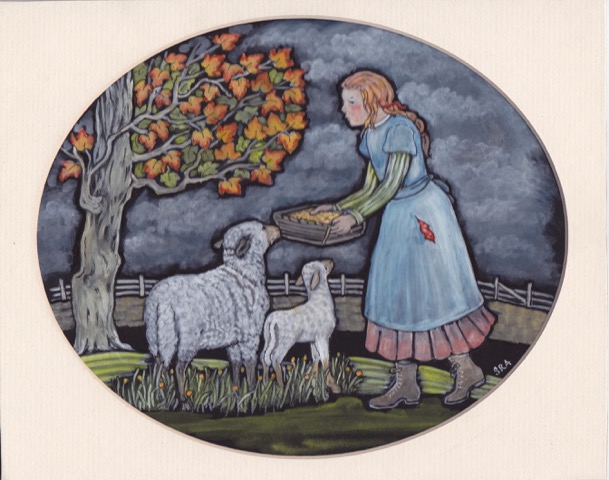 'Feeding the Sheep' by Susan Anderson will be on display in the art exhibit "Tis the Season" at the Old Chatham Country Store in Old Chatham, New York, beginning Friday, Dec. 2 (see item below).

Great Barrington — The Monument Mountain Regional High School (MMRHS) music department has announced that 13 of its students have been selected for the Western District Massachusetts Music Educators Association Senior Festival. The students were selected by audition and will perform at 3 p.m. on Saturday, January 14, 2017, at UMass Amherst with music students from throughout western Massachusetts.

The students selected for the chorus are Madeleine Redpath, Hayden Stein, Alessandra Reese and James Hallock. Joining the orchestra will be Olivia Rubino on violin, Anna Rubino on viola and Kyle Germain on percussion. Jack Bertelli will play alto saxophone in the concert band. The jazz band will include Richard Stanmeyer on trumpet (first chair), Soren Smedvig on trumpet, Wilson Sprague on tenor saxophone, Kevin Costello on trombone (first chair) and Mitch Zimmer on guitar.

Salisbury, Conn. — On Saturday, Dec. 3, at 4 p.m., the Scoville Memorial Library will welcome Dr. Kirsten Menking, professor of earth science at Vassar College, who will give a talk titled “How Climate Change is Revealed in the Hudson Valley by Geologists Playing in the Mud and What This Portends for Our Future.”

In her work at Vassar, Menking, uses pollen, charcoal, and other materials contained within lake sediments to reconstruct the history of climate change over the last million years. She conducts research on past climate change, on landscape evolution due to climatic and tectonic processes, and on the impacts of urbanization on streams including road salt and nutrient contamination. Menking holds a doctorate in earth sciences from University of California, Santa Cruz. After obtaining her Ph.D., she worked as a visiting assistant professor at Franklin and Marshall College and joined the faculty at Vassar in the fall of 1997.

Williamstown — A recent graduate of Williams College’s Center for Development Economics (CDE), Diala Issam Al Masri ’15, is one of three newly named Rhodes Scholars from Syria, Jordan, Lebanon, or Palestine. This is the first year that the Rhodes Trust is choosing scholars from that region, the result of a new partnership with the Saïd Foundation that was announced in June.

A native of Lebanon, Al Masri received a Fulbright Scholarship to further her studies at Williams after completing her bachelor’s degree in political science/international affairs with a minor in economics in 2014 at the Lebanese American University in Beirut. Since receiving her master’s in policy economics from the CDE, Al Masri has remained at Williams, working first as a teaching assistant at the CDE for the Class of 2016, and now as a research assistant in the economics department. Her research encompasses determinants of capital flows and the long-term relationship of finance and development.

As an undergraduate student in Lebanon, Al Masri was very involved with leadership and humanitarian organizations. She was one of six Lebanese students chosen to be part of the Middle East Partnership Initiative Student Leaders program, where she interacted with leaders from the Arab region. She participated as a leader in the Global Classrooms UNA-USA Model United Nations and served as a trainer for Mercy Corps, a global humanitarian aid agency that helps people survive after conflict, crisis, or natural disaster. She helped implement a pilot project on women’s empowerment with the United Nations Development Programme and worked with the World Youth Alliance’s Middle East operation to support Syrian refugees who were arriving in her hometown.

Al Masri says her plan is to pursue graduate work in economics at the University of Oxford to further her studies of econometric techniques and continue in a career as an economist and academic specializing in low- and middle-income countries and fragile states.

Old Chatham, N.Y. — The Café Gallery at the Old Chatham Country Store will present the paintings of Susan Anderson of New Concord and Barbara Willner of Chatham during December. “Tis The Season” will be on view from Friday, Dec. 2, through Saturday, Dec. 31, and an opening reception will take place on Sunday, Dec. 4, from 3 to 5 p.m.

Anderson has shown her paintings in numerous galleries and shows since 1984. She currently participates in shows in New York State, Massachusetts and Virginia. Her subjects vary from folk art genre scenes to more literal, illustrative pictures.   She has three grown children and lives at Concord Farm in New Concord with her husband, Steven. In addition to painting, she also writes for a children’s literary magazine.

Willner trained in fine art and design at Pratt Institute, and studied etching at the Art Students League and classical drawing at Die Form in Munich. She was vice president of the Historical Society of Early American Decoration and helped lead it into the 21st century. More recently, Willner has studied pre-modern painting techniques, including casein paint and egg tempera.