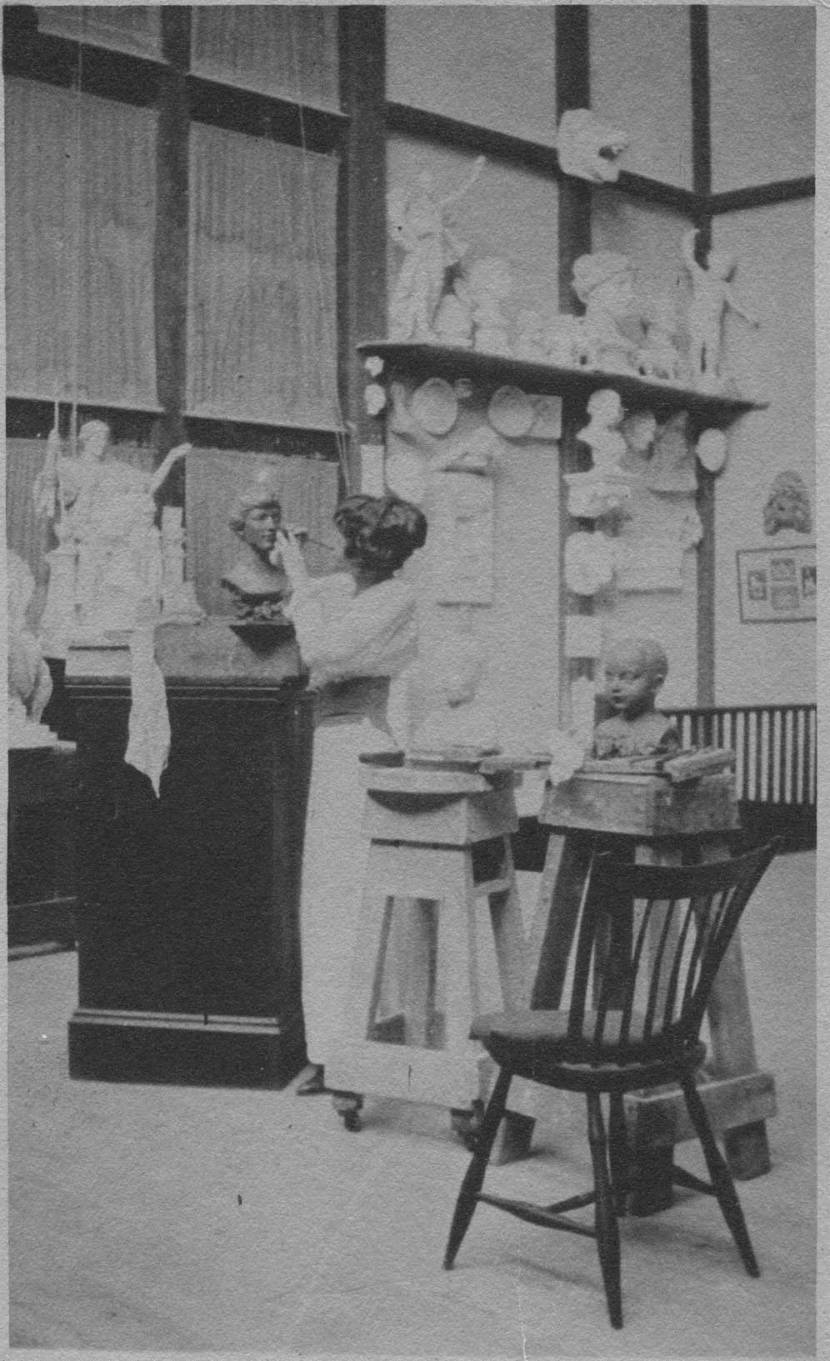 Stockbridge — Chesterwood will celebrate its 50th anniversary with an exhibition recognizing sculptor Daniel Chester French’s daughter, Margaret French Cresson, as an artist in her own right as well as honoring her dedication to preserving Chesterwood with the exhibit “Margaret French Cresson: Her Artistic Life and Legacy in Preserving Chesterwood,” which will open at the Stockbridge Library, Museum & Archives Friday, March 1, with an opening reception from 5 to 7 p.m. The exhibit will run through Tuesday, April 30.

French, most well-known for his sculpture of Abraham Lincoln at the Lincoln Memorial in Washington, D.C., divided his time between New York City and Stockbridge, where he and his family spent their summers starting in 1897. His only child enjoyed entertaining friends in the country and often sculpted alongside her father in his studio. After French and his wife, Mary, passed away, Cresson inherited Chesterwood, making it her full-time home in the 1950s. Passionate about keeping her father’s artistic legacy alive, she donated Chesterwood, with the exception of the residence where she lived until her death in 1973, to the National Trust for Historic Preservation, which opened the property to the public as a historic site in 1969. After Cresson’s death in 1973, the residence and its contents also became the property of the National Trust.

The exhibit will feature historical photographs that illustrate Cresson’s life at Chesterwood: modeling for her father, socializing with friends and family, and creating sculpture in the studio, as well as photographs of her as the “keeper” of Chesterwood. The exhibition will also highlight her work as a sculptor through portrait reliefs, small bronzes, exhibition photographs and catalogues. Other personal objects such as diaries, scrapbooks, writings and ephemera will contribute to an understanding of Cresson’s life and her involvement in civic activities.

The exhibit and reception are free and open to the public. For more information, contact Chesterwood at (413) 298-3579.

‘Children of the Moon’ performance to celebrate W. E. B. Du Bois

Great Barrington — The W. E. B. Du Bois Educational Series will present “Children of the Moon: a Youth Celebration of W. E. B. Du Bois” Thursday, Feb. 28, at 7 p.m. at the Mahaiwe Performing Arts Center. The event will feature youth from Monument Valley Regional Middle School, the Jubilee School in Philadelphia and the Du Bois Youth Ensemble performing music, dance and spoken-word poetry. It will also feature a brief lecture titled “Du Bois and the Future of the Youth” by Frances Jones-Sneed, Ph.D., professor emeritus of history at Massachusetts College of Liberal Arts in North Adams.

Taking its name from Du Bois poem “Children of the Moon,” which appeared in Du Bois’ book “Darkwater” in 1920, the event is part of a larger three-day program that brings together students from the two schools for an exploration of Du Bois’ life, work and legacy, including a trip to the W. E. B. Du Bois Center at UMass Amherst and a tour of local sites of relevance such as the W. E. B. Du Bois National Historic Site, Housatonic River Walk, the Clinton A.M.E. Zion Church, the Du Bois exhibit at the Mason Library and the Du Bois Center at Great Barrington. This marks the Jubilee School’s fifth visit to Great Barrington since 2001 and the second time its students have performed at the Mahaiwe.

The event is free and open to the public. For more information, contact he Mahaiwe Performing Arts Center at (413) 528-0100.

The event will begin with a brief tour of the solar-powered brewery from co-owner Andrew Mankin, followed by complimentary appetizers and a discussion on the impacts of climate change with Pleasant Valley Wildlife Sanctuary educator Zach Adams. Participants will learn how climate change impacts beer production, as well as about solar energy as an alternative energy source.

The event is free and open to the public. For more information, contact Pleasant Valley Wildlife Sanctuary at (413) 637-0320.

Lenox — WAM Theatre has announced the launch of its Elder Ensemble, a performance group for a diverse cohort of women over 65 years of age. An informational workshop about the ensemble will be held Saturday, March 2, from 11 a.m. to 1 p.m. at Lenox Yoga.

The criteria for participation is enthusiasm and the creative impulse to voice feelings and ideas through multiple forms of artistic expression. The ensemble will use a variety of devised theater techniques such as writing, improvisation, games, movement and brainstorming to create original performance material. Performance experience is welcome but not necessary. The Elder Ensemble will rehearse over three weeks beginning Monday, July 8, and will present four public performances in connection with the WAM Teen Ensemble at the end of July.

Tuition for the program is $300. Space is limited and scholarships are available. Attendance at the workshop is not mandatory for participation in the program. For more information or to sign up for the workshop, contact Talya Kingston at (413) 274-2024 or at talya@wamtheatre.com.