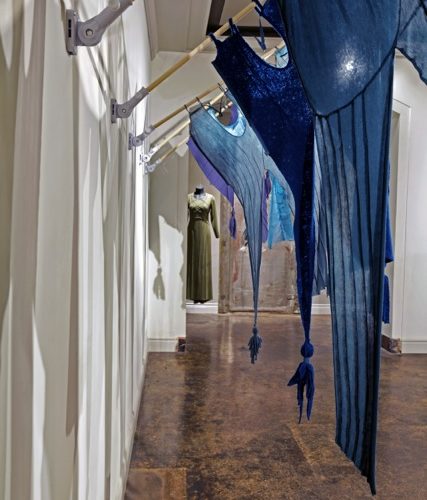 Hudson, N.Y. — McDaris Fine Art in collaboration with 2440 Design Studio presents an innovative exhibition by Lithuanian born, regionally based fashion designer Vilma Maré of Baltic Style, with an opening reception this Saturday, January 3, 2015, 6 to 9 p.m. at McDaris Fine Art, 623 Warren Street. Maré explores contemporary culture through an installation involving a symbolic ceremony of connection and cleansing. The exhibition continues during gallery hours, 11 a.m. to 5 p.m. Thursday through Monday, through February 2015. Admission is free. A pop-up store will feature Mare’s clothing designs for sale.

Egle, “Queen of Serpents”’ is a feminine image from Baltic myth with hereditary connection to indigenous rites, worship of ancestral land and family values, and harmonious dialogue between humankind and nature. The purpose of the ceremony and the installation is to restore the values of a sacred world. This story depicts an ancient ritual understood from a female perspective whereby Egle takes a central role as a mediator between sacral and secular spheres.

Exploring this non-heroic Baltic myth, the artist promotes the preservation of indigenous identity and respect for its idiosyncrasies through a wearable design aesthetic. Maré’s Baltic Style dresses a woman in comforting ensembles of healthy natural fabrics that portray her within serene, thoughtful semantics communicating universal values of respect for the Earth and female fertility, and a devotion to family and health.

This exhibition of artisanal clothing styles includes coats, skirts and other vestments. Besides the usual body protection and adornment of apparel, Maré also maintains its spiritual content, as protection against harm and attractor of fertility and happiness.

Additionally, Maré will exhibit 5 oversized, sartorial tapestries based on characters from the mythical story and 9 large original flags depicting a traditional celebration scene.

“Vilma Maré brings a heightened sense of connection and meaning to the clothing she designs,” said Corey Aldrich, founder of Electric City Couture, runway fashion shows by local designers, and one of the sponsors of this exhibition. “By combining a high degree of design and craftsmanship with a strong sense of spirituality, she transcends the boundaries of typical fashion and creates an empowered, wearable aesthetic.”

Maré, who recently had a pop-up store in Great Barrington (she is back in Hudson), studied at Kaunas College in Lithuania and New York’s Fashion Institute of Technology. Through an application of traditional quilt making, she invented a technique of tailoring within an original aesthetic featuring her signature vertical, rhythmic lines stitched into an intertwined composition like a net or map, which helps shape and fit the silhouette. Maré has shown in galleries around the world, including France, Lithuania and New York, and her clothes have been featured in New York City boutiques such as Patricia Fields, Antique Boutique, About Time, Bond 07, Henri Bendel and others. 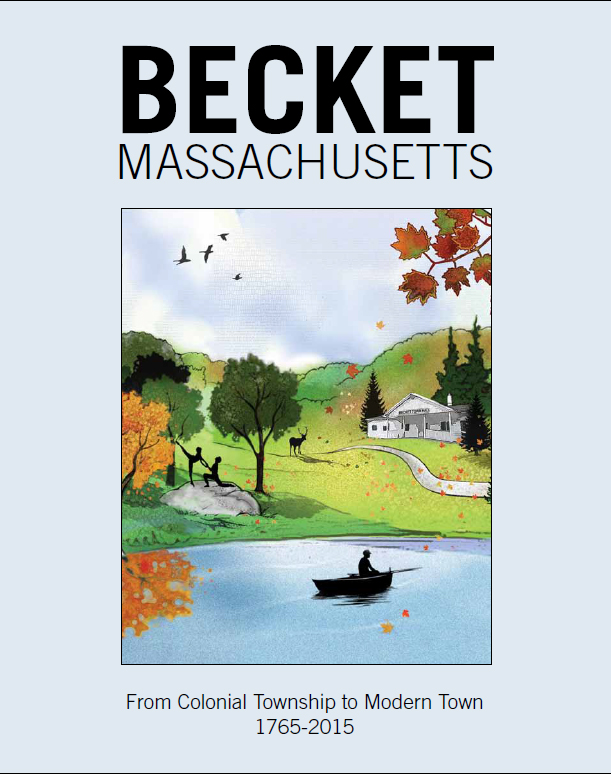 Becket — The Town of Becket will kick off its 250th anniversary celebration with the launch of its updated history book, Becket, Massachusetts: From Colonial Township to Modern Town, 1765-2015, on January 7 from 6 p.m. to 7 p.m. on the lower level of Town Hall at 557 Main Street. Members of the Becket 250th Committee will host the reception with light refreshments and copies of the book available for purchase.

The book spans the period from the town’s earliest settlement to present day. It opens with a synopsis of A Bicentennial History of Becket, Berkshire County, Massachusetts, published to coincide with the town’s 200th anniversary celebration in 1965.

Other chapters of the new history book include a detailed section on town government from 1965 to the present, a time of tremendous change in a town that for 100 years was a manufacturing center, with its own busy freight and passenger station on the Boston and Albany Railroad line. When rail service was discontinued over 50 years ago, Becket gradually became the town that it is today: a residential community with several summer camps, large numbers of seasonal homes and a growing cultural life led by the world famous Jacob’s Pillow Dance Festival. Other chapters feature Becket’s military veterans, public safety departments, roads, schools, churches, summer camps, cultural venues, housing, businesses, farms, and recreational and natural resources.

“We wanted a very readable and enjoyable book,” said editor Bruce Garlow. “The result is a large, softcover, coffee-table style book that contains over 100 photos and is perfect as a gift or for personal enjoyment. You can read the book in one sitting or pick it up occasionally and look it over at your leisure.”

“Sandra Jarvis, another member of the Becket 250th Committee, did a great job editing the photos,” Garlow added. “She culled through hundreds of historic and contemporary photos to select the final images to enhance the quality of the project. We had over 30 people write articles and contribute photos, including each member of the 250th Anniversary Committee. Together, they paint a beautiful picture of our lovely hilltown.”

Worth International Media provided design and production services. Garlow noted that Worth went “above and beyond” what was called for in its contract.  \Worth President Laurel Herman is a seasonal resident with a home on Fred Snow Road. The book will be available for sale at various locations in town for $20 each.

Other events for the anniversary include a history talk in Town Hall in February, part of the Becket Arts Center’s Marty Lasker Series. In May, there will be a student art show, a special ecumenical church service and several events planned around the town’s Memorial Day activities. June will feature a geocache tour intended to introduce students and others to Becket’s historic locations. A picnic and fireworks display for Becket residents is planned at Camp Chimney Corners, along with a “Becket Day” at Jacob’s Pillow, and guided tours of the Historic Becket Quarry and Forest. The official commemoration will be on June 21 with a tree planting at the historic Parade Ground, with invited elected officials in attendance. All activities are subject to change and schedules will be updated regularly on the Becket 250th committee’s website at www.becket250.org.