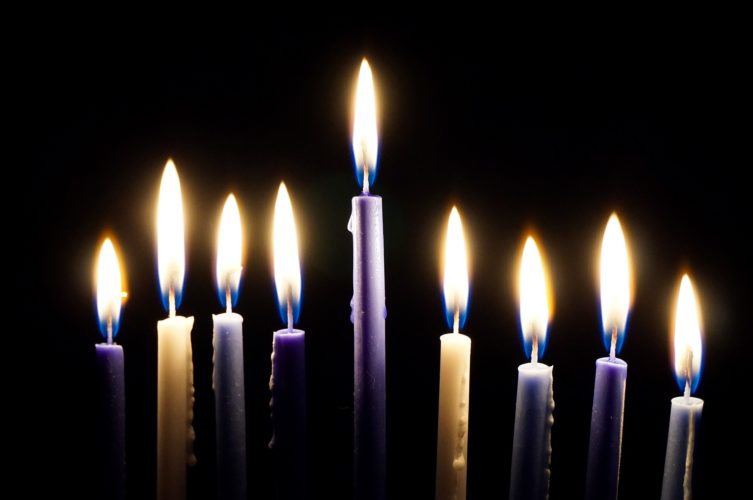 Image by Mike from Pixabay

Pittsfield— A Family Chanukah celebration, including a public menorah kindling ceremony, will take place on Sunday, December 25 at 4 p.m. at the Holiday Inn and Suites, 1 West Street, Pittsfield. Community leaders will attend the ceremony and assist in kindling the giant “Menorah of Freedom.” The free program, sponsored by Chabad of the Berkshires, Haddad Dealerships of the Berkshires, Harold Grinspoon Foundation, is open to the public and will include a concert featuring Israeli sensation Yoel Sharabi, hot potato latkes, donuts, chocolate Chanukah gelt, a grand raffle, dreidels, and an awesome award-winning family entertainer that will amaze and mesmerize audiences of all ages with his magnificent Bubblemania show.

Chanukah, a celebration of freedom, is highlighted by the kindling of the menorah each night of the holiday. The Chanukah lights provide warmth, joy, strength and inspiration. Such is the purpose of the community-wide celebrations.

All are welcome at this free event. Please visit www.Jewishberkshires.com for more information about  Chanukah celebrations in the Berkshires.

Pittsfield— Attend an orrery demonstration at Berkshire Museum on December 27 at 3 p.m. This is included with museum admission. All are welcome.

An orrery is a mechanical model of the solar system used to demonstrate their relative position and motion.

The orrery at the center of the Museum’s Rocks and Minerals gallery will be operated by a museum educator on Tuesdays and select Saturdays during Winter Fest. Learn all about the orbits of the planets and become mesmerized by this beautiful mechanical model created by artist Erik Van Cort and glass artist Josh Simpson.

Norfolk— The Norfolk Library is holding a Best of the Fest showcase on Tuesday, December 27 at 4 p.m. These short films tell big stories about creatures both great and small and will take you on a trip around the world with stop-motion, hand-drawn, and other amazing animation techniques. This program features films from the Netherlands, Australia, United States, United Kingdom, Canada, France, Japan, Czech Republic, and Greece. 56 minutes. All ages! Visit here to register.

The Best of the Fest is a traveling program from the Children’s Film Festival Seattle that includes award-winning and audience favorite films from the most recent festival. This program is intended to let youth audiences gain global awareness through the magic of film.

On Thursday, December 29 at 4 p.m. see the world through the eyes of the kids in live-action shorts. The young people in these films go on their own adventures, discover how to be true to themselves, and learn to face their fears. This program features films from New Zealand, India, Canada, United States, Mexico, and Ireland. Ages 8+. 93 minutes. Visit here to register.

Stockbridge— This past year the Berkshire Botanical Garden hosted the 8th Annual Rooted in Place Ecological Gardening Symposium. If you missed the event, recordings of the entire program or individual lectures are available till January 1. Register for $20-$55 online here.

Jewish Federation of the Berkshires shines a light on antisemitism

Pittsfield— Amid a widespread rise in antisemitism in North America and around the world, Jewish Federation of the Berkshires has joined Shine A Light, a comprehensive national initiative to illuminate the dangers of antisemitism through education, engagement, and advocacy.

Shine A Light uses the powerful story of Chanukah, the Festival of Lights, to champion the message that light can dispel darkness. Through a coalition of more than 100 Jewish and non-Jewish organizations, Shine a Light seeks to catalyze conversations and raise awareness across communities, on school campuses, and in the workplace, so that people will better understand what constitutes antisemitism and take steps to respond.

According to the Anti-Defamation League’s annual audit of antisemitic incidents released in March of 2022, antisemitic incidents in New England spiked 42% in 2021, with Massachusetts ranking as the worst offender. A 2021 survey of the American Jewish Committee found that one in every four American Jews has been targeted by antisemitism over the past year, and nearly four in ten report changing their behavior for fear of being identified as Jewish, or for their safety or comfort as Jews.

Ways you can “Shine A Light” on antisemitism:

Great Barrington— The Berkshire Bach Society (BBS) announces a new block of tickets at deep discounts of fifty percent off for employees of area non-profit organizations, educators, and frontline workers, just in time to extend the joy of the season into New Year’s.  Tickets are discounted only for the upcoming Bach at New Year’s: A Baroque Concerto Showcase.

Bach at New Year’s is an annual tradition with performances of Baroque music by nine-time Grammy Award winner Eugene Drucker, Music Director, and the Berkshire Bach Ensemble in Great Barrington on December 31, at 6 p.m., Troy on January 1, at 3 p.m., and Northampton on January 2, at 3 p.m.

Rhinoceros follows the story of a French ne’er do well, Berenger, a heavy drinker and procrastinator, whose friend Jean, a hard-working successful business man, is trying to help Berenger pull his life together. As Berenger waxes on about being in love with his co-worker Daisy, tensions rise between the two friends and as the day unfolds a frightening dynamic arrives on the scene as Berenger discovers that everyone around him, even his best friend, are suddenly changing into rhinoceros’s — in fact the rhino kingdom seems to be taken over the entire town! Don’t miss these staged-readings of Ionesco’s critically-acclaimed and iconic modern-classic!

The performance will take place at St. James Place, 352 Main Street, Great Barrington. Tickets will be available at the door, $20 suggested donation.