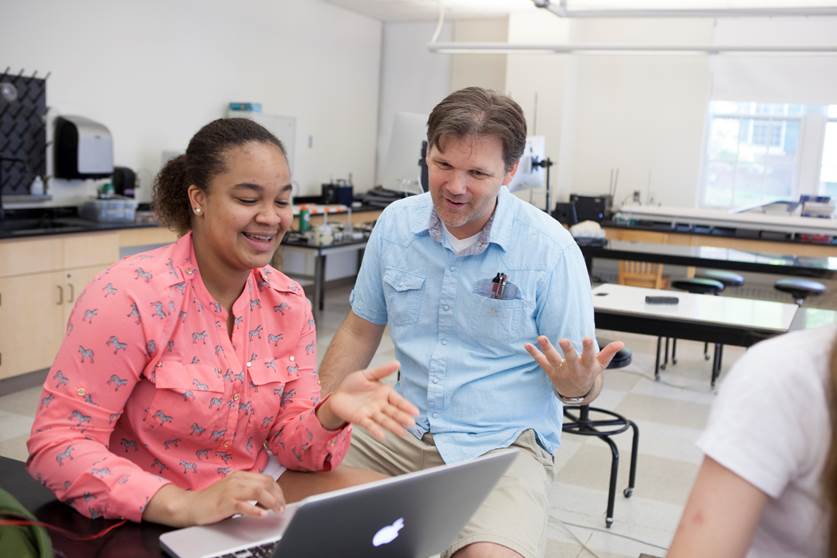 Lakeville, Conn. — Berkshire Taconic Community Foundation announced yesterday that William Fenton has been awarded the eighth annual James C. Kapteyn Prize for his outstanding work as an instructor in physics and astronomy, coach, and dorm head at the Hotchkiss School. The prize, which comes with a $10,000 award, was established to recognize high school teachers of exemplary character and integrity who have made a career commitment to teaching and who lead by example. This year, an additional grant of $2,000 will be awarded to the school in Fenton’s honor.

Colleagues say that, over the last decade, Fenton has transformed the science department at the Hotchkiss School. In 2008 he created a robotics elective and robotics club, both of which reach full capacity every year. He helped redesign the ninth grade science curriculum to provide skills-based learning methods that push students to attain a deeper understanding of the material, and he started the advanced placement Physics I course, which has grown to five sections led by three teachers. Fenton was instrumental in the development of a new observatory on campus and, in 2015, he and one of his students attended the American Association of Physics Teachers national conference to present an iPhone app they developed that can be used in the classroom to help students determine the speed of sound.

Outside the classroom, Fenton serves as junior varsity volleyball and ultimate Frisbee coach and plays rhythm guitar in the faculty band. For years he advised the science club and, through the astronomy club – which he currently advises – he and his students raised money to donate three telescopes to local libraries. He often hosts star-gazing sessions that are open to the Hotchkiss community, and helped organize a school-wide event to watch a lunar eclipse last September.

Fenton earned his bachelor’s of science degree in physics from Weber State University in Ogden, Utah. He moved on to pursue a Ph.D. in astronomy at Dartmouth College before deciding he preferred teaching to research. Fenton continues to indulge in his passions, spending summers at national parks in Utah as a “star ranger.”

A Jam for all Seasons – Chef Deborah Gordon will demonstrate how to turn seasonal produce into a delicious treat.

Working Dogs – Visitors to the Johnson family homestead will learn how herding breeds of farm dogs are trained and worked.

Tickets are $18 with discounts for multiple programs and families; children ages 12 and under will be admitted free when accompanied by an adult. For tickets and more information, see the Berkshire Edge calendar or contact Behold! New Lebanon at (518) 720-7265 or info@beholdnewlebanon.org.

The Unifier Festival is an experiential, interactive event that builds community and earth-centered awareness through arts and entertainment while promoting sustainable living. This year’s Festival will include performances from Balkan Beat Box, Emel Mathlouthi, Emancipator, Niyaz featuring Azam Ali, Hassan Hakmoun, Desert Dwellers, Youssoupha Sidibe, Club D’elf, Women of the World, Peia, and many others. First Nations Elders will be joining the gathering along with Grandmother Kaariina, Malidoma Patrice Somé, and Elders from other cultures that carry and share indigenous wisdom. An array of yoga, qigong, and kirtan offerings will be available, as well as children’s programming, sculptural works, live painting, immersive workshops, and installations by visual artists and sculptors. Vendors will present many handmade, fair-trade items and organic, local, cruelty-free food. The event is camping-optional with swimming, canoeing, and kayaking activities possible.

Lenox – Trinity Episcopal Church will present a performance by the Phoenix Boys Choir on Thursday, June 16, at 7:30 p.m.

Founded in 1947, the Phoenix Boys Choir incorporates programs featuring training in voice, music theory, and performance for boys age seven to 14. The Choir visited Spain and Portugal last year and is currently on a tour of the east coast of the United States and Canada. Thursday’s program will include works by Rutter, Purcell, Mozart, Britten, and others.

Tyringham — On Saturday, June 18, at 10 a.m. at the Tyringham Union Church, the Bidwell House Museum will present Eugene R. Fidell, who teaches federal Indian law and American Indian tribal law at Yale Law School, for a talk entitled “Past and Present: Praying Town to Casino – Current Issues of Sovereignty for Native Americans.” Rick Wilcox, who will give a brief history of the Stockbridge Mohicans and how they came to settle in rural Wisconsin, will introduce Fidell.

Eugene R. Fidell is a Senior Research Scholar in Law and the Florence Rogatz Visiting Lecturer in Law at Yale Law School. Since graduation from Harvard Law School in 1968, he has been a partner at LeBoeuf, Lamb, Leiby & MacRae and Feldesman Tucker Leifer Fidell LLP, where he is currently of counsel. He served in the U.S. Coast Guard from 1969 to 1972 as a judge advocate, and has continued to be actively involved in military legal matters, serving from 1991 to 2011 as president of the National Institute of Military Justice. He began teaching at Yale in 1993, and has also taught at Harvard Law School and the American University Washington College of Law. He is a part-time Berkshires resident.

West Stockbridge – The Diana Felber Gallery presents the show “Conversations” through Sunday, July 31. An opening reception will take place at the Gallery on Saturday, June 18, from 5:30 p.m. – 7:30 p.m.