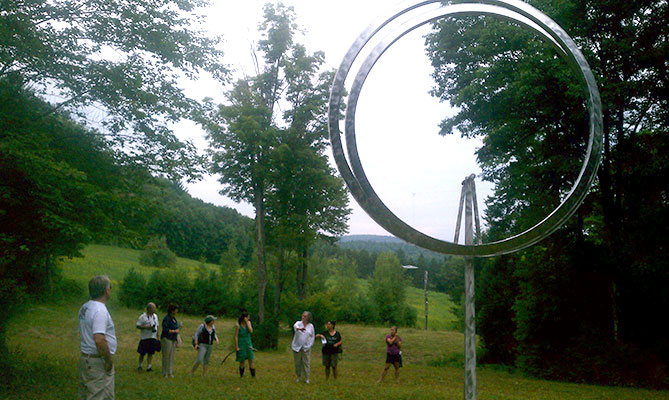 The $160,477 grant will supply 28 new air packs to the GBFD. This new equipment is more reliable and simpler to maintain than previous models and includes the most up-to-date safety technology. The new air cylinders hold 50 percent more air than the current air packs and the face pieces clearly transmit sound, greatly improving fire ground communications during emergencies. Updated visibility components prevent the masks from fogging.

GBFD uses air packs at approximately 20 fire, carbon monoxide, and hazmat calls each year. The department is currently in the process of procuring the new equipment and expects to begin using it this fall.

North Egremont — The Egremont planning board will hold a public hearing on proposed zoning bylaw amendments on Wednesday, July 20, at 7 p.m. at the North Egremont Fire Station, 175 North Plain Rd.

Movement is Art – Tour the rarely opened studio and outside sculpture garden of kinetic artist George Rickey with his artist son, Philip.

What You “Auto” Know About Your Car – Bud Godfroy of Godfroy’s Service Station will demonstrate the basics that drivers need to know and lead them through a car inspection.

Auctioneering 101 – Dolores Meissner, New Lebanon’s veteran auctioneer, talks about her personal journey, how she learned the auction business, and the rise of her auction house.

Rescuing and Restoring an Historic House – What does the skeleton of an old building have to tell us about its own history? How does one start to rehabilitate an old home?

Working Dogs – Visitors to the Johnson family homestead will learn how herding breeds of farm dogs are trained and worked.

Tickets are $10 per program with a 50% discount for those ages 5-16; children ages 4 and under are admitted free when accompanied by an adult. For tickets and more information, see the Berkshire Edge calendar or contact Behold! New Lebanon at (518) 720-7265 or info@beholdnewlebanon.org.

Housatonic – After 85 years at the keyboard, local pianist Hilda Banks Shapiro has made her first solo recording. A reception honoring Shapiro and celebrating the release of the CD will be held on Sunday, July 17, from noon – 2 p.m at the Unitarian Universalist Meeting of South Berkshire.

Shapiro’s self-titled album bears a photo of her trademark red high-top sneakers and features pieces by Bach, Chopin, Mozart, Schubert, and Johann Strauss as well as two rags by Scott Joplin and four Gershwin songs. All proceeds from the sale of the album will benefit the church, for which she plays each month.

Shapiro began taking piano lessons when she was four years old and, at 16, made her solo debut at Carnegie Hall in New York City and Symphony Hall in Boston. Six years later she married and eventually moved to a farm in Great Barrington where she raised her 12 children and still lives today. A familiar face in South Berkshire, Shapiro continues to play in venues throughout the area. She is a board member for Berkshire Waldorf High School, a member of the Great Barrington and Egremont Garden Clubs, and a past member of the Great Barrington Culture Council. She has also been a trustee of the Mason Library for over two decades and recently served on the committee that chose the new trees for downtown Great Barrington.

Winner of the Great American Jazz Piano Competition, Gardony has been praised for his uniformly high quality of compositions, harmonic complexity and emotional content. An accomplished solo performer as well as an ensemble player and leader, he has 11 CDs to his credit, the latest of which, “Life in Real Time,” received a four-star review in Down Beat, and was named by the Boston Globe as one the 10 best jazz albums of 2015. A graduate of the Berklee College of Music where he is now Professor of Piano, Gardony has been living in Boston for the past 25 years.

Tickets are $25 in advance and $30 on the day of the event. For tickets and more information, see the Berkshire Edge calendar or contact web@berkshiresjazz.org.

Hudson, N.Y. — On Saturday, July 16, at 3 p.m., Olana State Historic Site will host a “tree-torials” species tour with environmental educator Fran Martino, who will lead participants in a landscape tour of the trees on Olana’s grounds. The cost of the program is $15 for Olana members and $20 for nonmembers. For tickets and more information, see the Berkshire Edge calendar or call Olana’s education department at (518) 828-1872 x105.