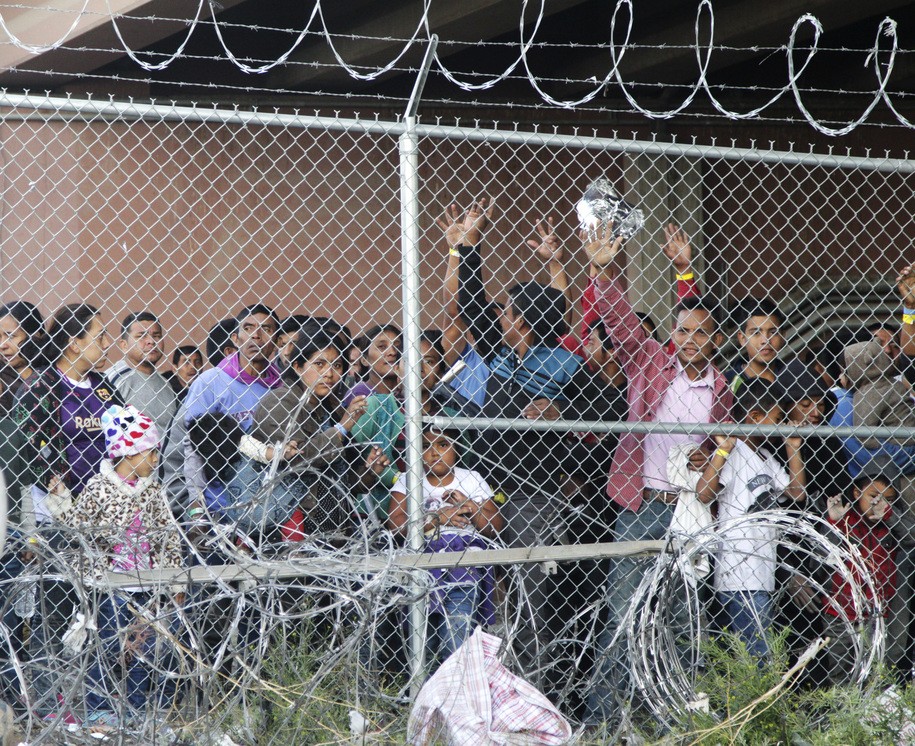 A March 27, 2019, photo of migrants detained underneath the Paso del Norte International Bridge on the U.S.-Mexico border. Photo courtesy AP

Lights for Liberty gatherings to protest inhumane treatment of migrants

Berkshire County — The Four Freedoms Coalition, Indivisible Pittsfield, Greylock Together and the Berkshire Democratic Brigades will hold a Lights for Liberty gathering Friday, July 12, from 7 to 9 p.m. in Pittsfield’s Park Square. One of more than 700 events to be held throughout the country and the world, the gathering will be a peaceful protest in solidarity with communities across the country against the detention camps at the U.S.’ southern borders. In addition, a Lights for Liberty candlelight vigil will be held the same evening from 8:30 to 9 p.m. at the First Congregational Church of Great Barrington, 251 Main St., presented by Grace Church. Candles will be provided, as will battery-powered tea lights for children, and photos will be taken. All are welcome. For more information, contact the Four Freedoms Coalition at 4freedomscoalition@gmail.com.

Great Barrington — In a dramatic performance blending music and art, the Aston Magna Music Festival will present “Music in the Age of Peter Paul Rubens” Saturday, July 13, at 6 p.m. at Saint James Place. A pre-concert talk will take place at 5 p.m., and the concert will be followed by a wine and cheese reception with the artists.

Guest director Richard Savino will present the music that influenced the art of Flemish Baroque artist Rubens. A professor at Sacramento State University and the San Francisco Conservatory of Music, Savino has produced concert programs and soundtracks for videos blending music and art, which have been shown at the Louvre in Paris and the national museums in Beijing, Shanghai and Abu Dhabi.

The program includes works by Caccini, Frescobaldi, Marin, Arañes and others. The featured musicians will be Savino and Catherine Liddell on guitar and theorbo, Daniel Stepner and Danielle Maddon on Baroque violins, Laura Jeppesen on viola da gamba, and Michael Sponseller on harpsichord. Vocalists will be soprano Jennifer Kampani, mezzo-soprano Deborah Rentz-Moore and tenor Ryland Angel.

“The Tricky Part,” written and performed by Moran, is a solo show about one man’s journey through the complexities of Catholicism, desire and human trespass. Moran is an award-winning writer, solo performer and veteran Broadway/off-Broadway actor. His most recent play, “All The Rage,” received the 2013 Lucille Lortel Award and Outer Critics Circle nomination for Outstanding Solo Show.

Tickets are $35. Following the Sunday matinee will be an audience talkback with Moran moderated by Martine Kei Green-Rogers, who is president of the Literary Managers and Dramaturgs of the Americas, dramaturg with Oregon Shakespeare Festival and member of the theater arts faculty at SUNY New Paltz. For tickets and more information, see the Berkshire Edge calendar or contact the Ancram Opera House at (518) 329-0114 or info@ancramoperahouse.org.

Williamstown — Field Memorial Professor of Astronomy Jay Pasachoff and a team that included Williams College seniors Christian Lockwood, John Inoue and Erin Meadors joined fellow astronomers and spectators in South America to observe the solar corona during the total solar eclipse of July 2. Pasachoff and his team travelled to Chile where he and the students observed the eclipse from a mountainside above La Higuera.

The teams’ scientific goals included studying motions and dynamics of the solar corona, the million-degree extended outer atmosphere of the Sun, which is held in interesting shapes by the sun’s magnetic field. The teams also measured spectra showing the temperature of different parts of the corona. The first results confirmed the relatively low (for million-degree gas) temperature of the corona at this minimum phase of the sunspot cycle.

Pasachoff said that many thousands of people from around the world traveled to South America for the eclipse and were rewarded with striking views of the dramatic eclipse phenomena.