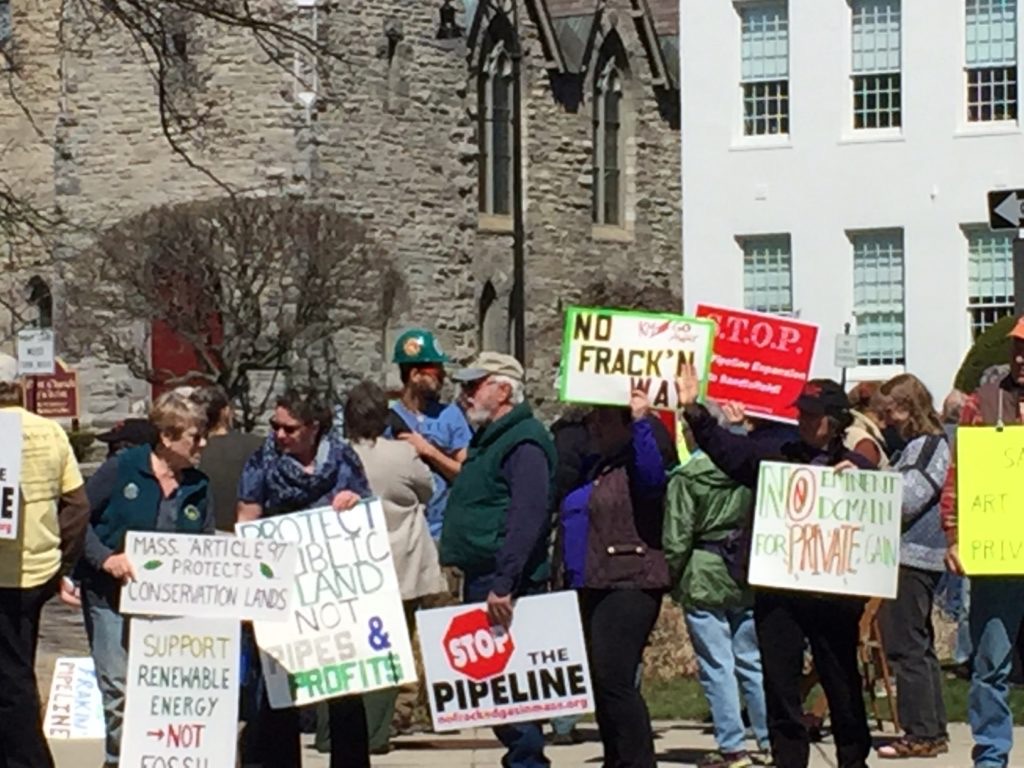 Protesters in front of Berkshire Superior Court last April during a hearing on whether to allow pipeline goliath Kinder Morgan to cut down old-growth forest on state-owned, state-protected land in Sandisfield. The Sugar Shack Alliance will hold a public funeral on Monday, Feb. 6, in Pittsfield's Park Square for Article 97 of the Massachusetts State Constitution, which was written to protect lands acquired for conservation purposes (see item below). Photo: Heather Bellow

Great Barrington — On Monday, Feb. 6, at 7 p.m., immigration lawyer Laurel Scott will visit Bard College at Simon’s Rock to discuss President Trump’s signed and drafted executive orders. Scott’s talk will cover the legal context the orders fit into, how they are expected to affect the immigrant population, and the legal challenges they present. The discussion will take place in the Fisher Science and Academic Center’s Clark Auditorium and is free and open to the public.

During the week of Jan. 23, Trump signed three executive orders affecting immigration in the United States. That same week, three additional draft executive orders on immigration were leaked but have not yet been signed. Scott, an expert on inadmissibility, will deliver a one-hour presentation followed by 30 minutes of questions and answers.

Scott, who is a parent of a current Bard Academy student, received a BA from Simon’s Rock College, a master’s degree from Duke University, and a law degree from Temple University in Philadelphia where she completed the Temple University Immigration Law Clinical. She spent a year studying at Queen’s University Belfast and completed an internship at the European Parliament. She started work on her first waiver of inadmissibility in 2003 and quickly realized that waivers were an ideal niche for her new firm. Over the years, she has emerged as one of the nation’s leading experts in immigrant waivers, publishing articles on the subject and speaking at events for immigration lawyers.

Pittsfield — On Monday Feb. 6, at 1 p.m. on the sidewalks surrounding Park Square and across from Berkshire County Superior Court, the Sugar Shack Alliance will gather to hold a public funeral for Article 97 of the Massachusetts State Constitution.

Massachusetts voters approved Article 97 in 1972, granting people the right to a clean environment and authorizing the Commonwealth to acquire conservation easements. Article 97 was intended to be a legislative check to ensure that lands acquired for conservation purposes were not converted to other inconsistent uses.

On Dec. 29, 2016, the Massachusetts Attorney General’s office announced that, on behalf of the Massachusetts Department of Conservation and Recreation, it had reached a settlement with Kinder Morgan for the pipeline right-of-way through Otis State Forest in Sandisfield, parts of which are on Article 97-protected lands. Monday, Feb. 6, is the day of the hearing on the proposed settlement agreement on the Otis State Forest eminent domain takings of the easements and the negotiated compensation package.

Carpooling is encouraged. Online information regarding parking and rules in the courthouse is available. Attendees are requested to wear appropriate funeral attire and observe a somber demeanor. They are also encouraged to attend the 2 p.m. hearing following the funeral, but should be aware that there will be no signs or demonstrating inside the Courthouse. Signs on sticks will not be allowed. 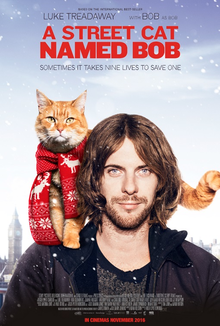 Great Barrington — The Berkshire International Film Festival, Mountainside Treatment Center and the Berkshire Humane Society’s Purradise will present a screening of the film “A Street Cat Named Bob,” directed by Roger Spottiswoode, on Wednesday, Feb. 8, at 7 p.m. at the Beacon Cinema in Pittsfield and Thursday, Feb. 9, at 7 p.m. at the Triplex Cinema in Great Barrington.

Based on the international bestseller, “A Street Cat Named Bob” tells the true story of James Bowen, a young British street singer struggling with addiction, and his remarkable road to recovery thanks to the unexpected arrival of a stray ginger tom cat. When the cat won’t leave James’ side, he names him Bob and the heartwarming partnership become the key to James’ recovery. The film stars stars Luke Treadaway, Joanne Froggatt, Ruta Gedmintas and Anthony Head and includes original songs by Charlie Fink. After the screening, there will be a discussion and question-and-answer session with Spottiswoode; the film’s screenwriter and BIFF Advisory Board member Maria Nation; and Jessica Dunn, who will discuss Mountainside Treatment Center’s work, philosophy and success in addiction treatment.

Tickets are $10 and available from the respective theaters. On Thursday, February 9, a pre-screening reception with filmmakers will be held at Rubiner’s. Tickets for the reception and screening are $20 and may be purchased at the Triplex. Purradise will bring some feline guests to the Triplex who will be available for adoption. Those who bring a donation for Purradise will receive a complimentary child-sized popcorn.

‘Talking With Teens: A User’s Guide for Parents’

Great Barrington — “Talking With Teens: A Users Guide for Parents;” a community forum sponsored by the South Berkshire Community Health Coalition and Railroad Street Youth Project, will take place at the Mahaiwe Performing Arts Center on Wednesday, Feb. 8, at 6:30 p.m.

The forum will feature Dr. Jeff Foote, author of the award-winning “Beyond Addiction: How Science and Kindness Help People Change” and co-founder of the Center for Motivation and Change: Berkshires in New Marlborough; Dr. Andrew Gerber, medical director and CEO of Austen Riggs Center in Stockbridge; Dr. Claudia Gold, pediatrician, consultant on human development and author the books “Keeping Your Child in Mind” and “The Silenced Child;” and Lyn Yonack, a Great Barrington psychoanalyst and psychotherapist who has contributed to the American Academy of Child and Adolescent Psychiatry’s books “Your Child” and “Your Adolescent.” RSYP’s executive director Ananda Timpane will moderate the panel, which will be followed by a question-and-answer period with audience members.

The event is free and childcare services will be provided. Questions or RSVPs for childcare should be directed to RSYP’s drop-in center at (413) 528-2475 or info@rsyp.org.

Pittsfield — Berkshire Community College congratulates all students who made the Dean’s List for the fall 2016 semester. Dean’s List status is awarded to full-time students who have declared a major; completed a minimum of 12 non-repeated, traditionally graded credit hours during the fall semester; and achieved a 3.250 to 3.749 grade point average for honors, or a 3.750 to 4.000 grade point average for high honors.