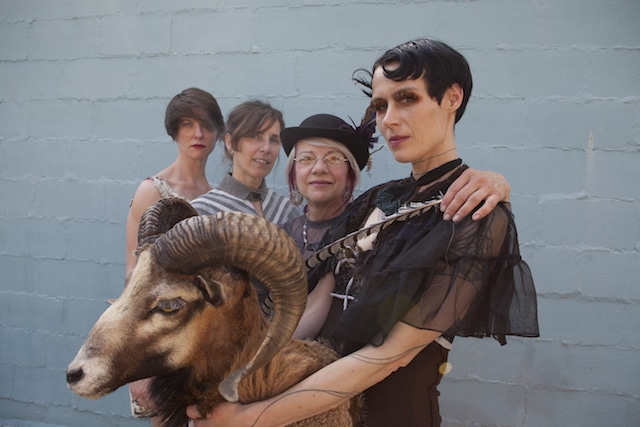 Hudson, N.Y. — Music critic and author Seth Rogovoy will produce an album by Hudson-based electro-folk ensemble Ryder Cooley & Dust Bowl Faeries. The album will be recorded in September 2015 at Three Horses in a Wood studio, where it will be engineered by musical visionary, composer, and legendary drummer/percussionist Bobby Previte, and mixed by Rachel Alina, of Hudson, whose credits include Katy Perry, Pink, Rivers Cuomo, and Stephen Marley, scion of the first-family of reggae. The album is scheduled for release in February 2016.

A 30-day Indiegogo campaign to raise funds to cover recording, mixing and mastering, manufacturing, duplication, and distribution costs has raised over $7,000 in its first week. The campaign needs to raise a total of $10,000 for it to be successful. If it falls short of that amount, the pledged funds will be returned.

“We’re hopeful that we can raise $3,000 over the next three weeks, but campaigns typically raise most of their funds in the first four days, so we continue to encourage people to pre-order a download at $15, or a CD plus download at $25,” said Rogovoy, whose producer duties include attaining the financing for the recording.

Rogovoy and Cooley first met after he reviewed a Dust Bowl Faeries concert at Club Helsinki Hudson last summer. Cooley felt that Rogovoy understood what she was attempting to put forth with Dust Bowl Faeries, and captured it in words as no one had previously. During an informal conversation, Cooley talked about the difficulties of recording an album when one is simultaneously the bandleader, lead singer, instrumentalist, and songwriter. The two quickly realized that the missing element was a sympathetic ear who could spearhead and organize the project, and see it through all its stages, including running the recording sessions in order to capture a sound and aesthetic that best contextualized the gothic-folk songs that Cooley writes for the band. Rogovoy volunteered for the task, Cooley accepted, and they were off and running.

“Over the years, I’ve recorded several albums, mostly in friends’ homes and make-shift studios,” Cooley said. “These recordings are so important to me as both archives of my work and as musical offerings for the world. However, they are low-budget, bare-bones recordings that haven’t garnered the benefits of more sophisticated studios and recording techniques. After years of doing everything by the seat of my pants/skirts, I’m excited to be working with Seth and our team of artists and musicians to make a professional album, full of magical, aural wonders.”

“I’d always wanted to produce an album,” Rogovoy said, “but it was just a question of working with the right musicians at the right time.” After 30-plus years of reviewing recordings and live performances, Rogovoy says he has a sense of what works and what doesn’t. “I have my favorite sounds; I admire the work of certain producers; and I have a really strong sense of how a Dust Bowl Faeries recording can in and of itself be a work of art, especially given how Ryder is more than just a bandleader – she’s a multimedia artist, a visual artist, a performance artist. Her work with Dust Bowl Faeries is very visually evocative, and our goal is to make a recording that not only sounds great, but that evokes a sense of place – the mysterious world of Dust Bowl Faeries.”

The ensemble includes well-known Capitol Region electronic keyboardist Sara Ayers and lap-steel guitarist Karen Cole. With Cooley on accordion, musical saw and ukulele, the instrumentation is unusual and helps create a unique sound. The group recently added two new musicians, percussionists Jen DuBois and Joann Stevelos. For the recording, Rogovoy and Cooley – who co-hosts the weekly open-mic night on Tuesdays at Club Helsinki Hudson — will draw upon the region’s wealth of musical talent for an enhanced musical palette in the service of the songs.

A video about the project can be streamed here. For more information about the campaign, go to https://www.indiegogo.com/projects/ryder-cooley-and-dust-bowl-faeries-recording – /story

Six in a tunnel: Annie Baker’s ‘The Aliens’

Housatonic — Emergent Ensemble will perform “The Aliens,” a play by Pulitzer Prize-winning playwright Annie Baker. This humorous and heart wrenching play will be performed in a makeshift theater in a tunnel next to the Housatonic River at 430 Park St. The show will run Friday, May 29 through Sunday June 7th, Friday, Saturday, and Sunday evenings at 8 p.m. with one preview on May 29.

“The Aliens” is a coming-of-age story, set in the staff area behind a coffee shop in small town in Vermont. Jasper and KJ are two men in their early thirties who smoke, read Bukowski, sing songs, and waste time imagining themselves as heroes of iconic Americana. Enter Evan, a tragically awkward high school student who has just started working at the coffee shop. Tasked with getting them to leave — “It’s like a loitering thing,” he says — he becomes entangled in their existence as they adopt him as their protégé. Baker’s trademark knack for capturing rural life imbues The Aliens with humor and heart, as the characters struggle to connect with each other, society and themselves.

The cast of “The Aliens” includes Alex Dornemann as Evan, Colin McCarthy as KJ, and Patrick Toole as Jasper.

The non-traditional venue, a tunnel attached to a historic mill building in Housatonic provides a nontraditional setting.  “We thought about using an actually coffee shop, but discarded the idea quickly because the play is hyper-realistic and I didn’t want it to get lost in an outdoor space,” said Director Maizy Broderick Scarpa. “So we started searching for more traditional theatres. But while rehearsing in Housatonic we found this tunnel and it was instantly clear that we had to perform here; not only does it provide the framing the play needs, but the entire company is completely energized by the space. We couldn’t wait to start playing in it.”

Tickets will be available at the door free of charge. There is a suggested donation of $15.

The Emergent Ensemble is a group of theater artists whose mission is to rise out of the surroundings in different configurations depending on the requirements of the moment, to produce quality theater on a local scale that is affordable and accessible to all.

Playwright Annie Baker grew up in nearby Amherst, Mass., and won the 2014 Pulitzer Prize for The Flick, a play about employees of an old cinema in Worcester.

For more information about the Emergent Ensemble, go to https://www.facebook.com/emergentensemble

Great Barrington—After making a splash in West Stockbridge last year, Faith DiVecchio has opened a second location for her consignment store at 684 Main St., in the same complex as Bizallion’s Café and the Dubois Center at Great Barrington. The new space is larger and can hold more furniture, rugs, and artwork, alongside quality clothing and jewelry. The hours of the new store are Wed. – Mon. 11-5, Sun 12-4.

The West Stockbridge store hours have expanded for the season to Thur – Mon 11-5, Sun 12-4. It is located at 2 Albany Road.

DiVecchio is running a short Indiegogo campaign (until May 30) that gives the community, consignors and customers the opportunity to support the business at the ground level in exchange for specialized consignor relationships in which there will be varying levels of participation and investment. To see the video and campaign page, click here.