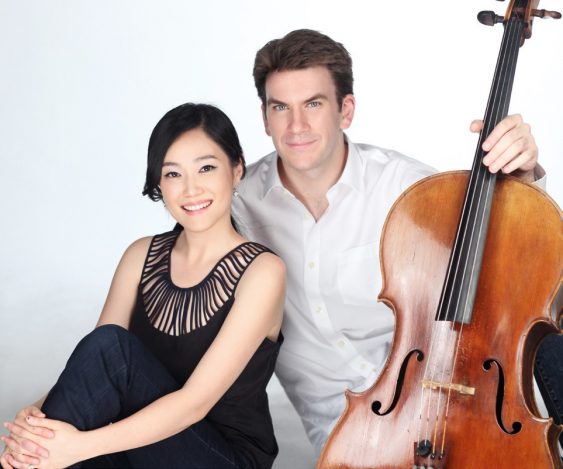 A native of Cincinnati, Ohio, Arron made his New York recital debut in 2000 at the Metropolitan Museum of Art. Since that time, he has appeared in recital; as a soloist with major orchestras; and as a chamber musician throughout North America, Europe and Asia.

Since making her debut at the age of 12 performing Chopin’s First Concerto with the Korean Symphony Orchestra, Park has performed in such venues as Carnegie Hall, Lincoln Center’s Alice Tully Hall, Merkin Hall, 92nd Street Y, Philadelphia Museum of Art, Kravis Center, and the Seoul Arts Center in Korea.

Tickets are $20. For tickets and more information, see the Berkshire Edge calendar or contact the Sandisfield Arts Center at (413) 258-4100 or info@sandisfieldartscenter.org.

Alford — Artists Dai Ban, Julie Scott and Shira Toren will open their studios to the public Sunday, Oct. 6, from 11 a.m. to 4 p.m. for the Alford’s first-ever Open Studio Day.

Ban is a Japan-born artist who moved to Brooklyn, New York, in 1985 to show his sculpture and work in the TV and film industry. He relocated to the Berkshires in 1992. In doubts about his art in 2006, it was almost 10 years before he re-entered the sculpture studio, during which time he occupied himself with jewelry-making. Ban studied sculpture and holds a Bachelor of Fine Arts from Musashino Art University in Tokyo, Japan.

Scott works in watercolor and acrylic and produces monotypes on a large press in her studio. She graduated from the Tufts/Boston Museum School Bachelor of Fine Arts program with a degree in painting, and studied printmaking and painting at California College of the Arts. She has spent over 30 years dividing her time exhibiting her fine art and working as an editorial illustrator/graphic artist.

American-Israeli artist Toren was born in Tel-Aviv. She received her Bachelor of Fine Arts from the Pratt Institute and associate degree in art therapy from the New School. She attended classes in painting at the Art Students League of New York. She has been a Berkshire resident for over 20 years and is currently working in studios in Alford and Bushwick, Brooklyn. Inspired by textiles and the natural world in equal measure, Toren’s monochromatic Venetian plaster-base paintings and drawings have been exhibited in many galleries, including a solo show at No. Six Depot in West Stockbridge.

For more information and a map to studio locations, see the Berkshire Edge calendar.

Pittsfield — On Tuesday, Oct. 8, at 2 p.m., Berkshire Community College and the Hoffmann Bird Club will offer a forum presentation with Irene Pepperberg, Ph.D., in Koussevitzky Room 111 at BCC’s main campus.

The presentation is based on Dr. Pepperberg’s decades-long work with Alex, a grey parrot who demonstrated remarkable abilities. Pepperberg discovered, for instance, that Alex had a hidden world of animal intelligence and learned to accurately use over 100 English-word labels to describe objects, shapes, colors and material. He did simple math and understood the concepts of “none,” “same/different” and “bigger/smaller.”

Discussing her latest work with the Alex Foundation, which supports research in the cognitive/communicative abilities of parrots, and her current African grey subjects, Pepperberg will highlight her work throughout the years and suggest where the future of animal intelligent research might lead. She has offered to welcome anyone who has an African grey parrot to bring it to the presentation.

The presentation is free and open to the public. For more information, contact Berkshire Community College at (413) 499-4660.