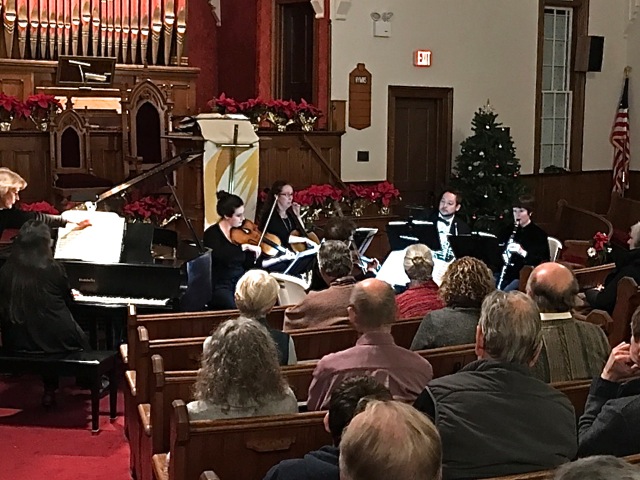 The West Stockbridge Chamber Players performed to a packed house on Dec. 29, 2016, despite inclement weather (see item below).

Salisbury, Conn. — On Saturday, Jan. 7, at 4 p.m., the Scoville Memorial Library’s Documentary Filmmakers Series will welcome filmmaker Fidel Moreno who will give a talk titled “Gather Our Hearts at Standing Rock.” Moreno is currently working on a film about the Standing Rock protest and will show some preliminary footage and discuss his experience.

Moreno is an award-winning filmmaker whose works include “The Peyote Road,” ‘LifeSpirit,” and “Wiping the Tears of Seven Generations.” He is also a youth advocate and community development specialist, having worked with Native American tribal youth and restorative justice programs for many years. Moreno has been to the protest against the Dakota Access Pipeline near the Standing Rock Sioux reservation several times and witnessed the gathering of people to form a community united by the commitment to protect water resources and the Missouri River, one of the longest water systems in the world. He is Huichol, Chichimeca and Mexican-American and is also a ceremonialist working with veterans, youth and communities experiencing posttraumatic stress disorder.

Pittsfield — On Monday, Jan. 9, at 10:45 a.m., the Jewish Federation of the Berkshires will present the free program “Aging: A Lifelong Process” with therapist Maggie Bittman at Congregation Knesset Israel.

Said Bittman, “From birth, we begin to age with Time. Along the way, we develop strategies to help manage the stressors that come with living life – those ‘existence pains’ or ‘existential stressors. Along the way we find meaning and purpose, experience aloneness, confront mortality, and develop self will. Within this context, participants will discuss, share, and offer support to one another.”

West Stockbridge — Despite the blast of snow and wind, music lovers made their way up the steps of the West Stockbridge Congregational Church on Thursday, Dec. 29, 2016, to attend the West Stockbridge Chamber Players’ annual winter concert to benefit the 1854 Town Hall Restoration campaign. The church was full by the time artistic director and clarinetist Catherine Hudgins and pianist Sayuri Miyamoto performed the opening piece: Max Reger’s “Albumleaf.”

Horn player Jason Snider introduced the next selection, Johannes Brahms’ Horn Trio in E-flat major, Op. 40. He demonstrated the difference between the sound of the natural, valve-less horn (which Brahms chose for the composition) and the instrument being played today. Violinist Sheila Fiekowsky–who, with Miyamoto, completed the trio of musicians­–explained that horns are rarely seen being cleaned during concerts because the horn section is seated behind the string section, which politely covers for them.

During the intermission, West Stockbridge Historical Society president Bob Salerno thanked everyone for coming and gave a brief and timely talk on the history of snow plowing in West Stockbridge. In 1935–the year that Ernő Dohnányi’s composed his Sextet, Op. 37, the evening’s closing piece–West Stockbridge purchased its first snow plow under the aegis of the town’s first highway superintendent.

Hudgins then introduced the piece itself, pointing out that the Germany of 1935 was filled with dark and disturbing events, a mood which she believes is reflected in the early movements of the piece. Because of their role in the plot to assassinate Hitler, Dohnányi’s son and his brother-in-law, Dietrich Bonhoeffer, would eventually be sent to a concentration camp and hanged. Performed by Hudgins on clarinet, Snider on horn, Fiekowsky on violin, Mary Ferrillo on viola, Jennifer Lucht on cello and Miyamoto on piano, the rarely heard composition reverberated through the hushed church.

A reception followed the performance at Connie Eagan’s festively decorated home next to the church.