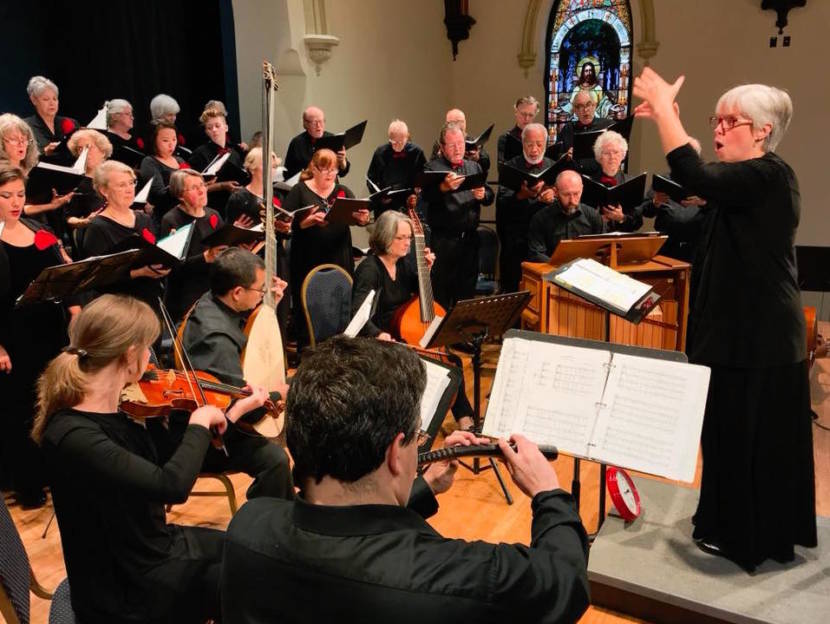 The singers and musicians of Crescendo, let by Christine Gevert, rehearse before an October 2017 concert at Saint James Place in Great Barrington. Photo courtesy Crescendo

Lakeville, Conn. — Crescendo has announced that it will present its fall choral program, ‘The Sound of the Trumpet,” Saturday, Nov. 10, at 6 p.m. at Saint James Place in Great Barrington, Massachusetts, and Sunday, Nov. 11, at 4 p.m. at Trinity Lime Rock. Featured in the program are British composers Henry Purcell and Sir John Tavener, and the music of American composer Scott Perkins, which commemorates New England life and includes music composed to poetry by Henry Wadsworth Longfellow, Emily Dickinson, Lydia Huntley Sigourney and Nathaniel Hawthorne.

Gevert observed: “Music often accompanies the joyful as well as the sorrowful moments of our lives. Our program features some of the most splendid music composed for the festive day of Saint Cecilia, the patroness of music, in late 17th century England. Henry Purcell’s “Te Deum and Jubilate Deo, Z. 232” is one his most celebratory pieces in which the trumpets and singers are in constant dialogue. In the same spirit is the contemporary “Jubilate Deo” by Scott Perkins, in which the eight voices of the chorus alternate with the organ. Both Requiems are contemplative and soothing, featuring words that console and uplift, and sounds that are intended to give us an inkling of eternity.”

Tickets are $10–$60. For tickets and more information, see the Berkshire Edge calendar or contact Crescendo at (860) 435-4866 or crescendo@worldclassmusic.org.

Dalton — The world premiere performance of  “A Pilgrimage of Hope: The Rite of Passage,” composed and designed by Kate Caton and Ted Kastrinos, will be presented at the First Congregational Church of Dalton Friday, Nov. 9, and Saturday, Nov. 10, at 7 p.m. The church will host a meet-and-greet reception with light refreshments following each performance.

A contemporary ecumenical passion play, “A Pilgrimage of Hope” expresses the concepts of life and humanity through the voices of forefathers and -mothers utilizing prose, music, song, movement and a media-correlated backdrop meaningful to the local community.

Caton received her bachelor’s degree in music education from Fredonia State University and her master’s degree in arts education from Stony Brook University. Throughout her career, she has composed, conducted and directed performances in the U.S. and abroad, and been instrumental in curriculum development at the secondary and college levels. Caton was founder and director for the Drury Stage Company and currently teaches in the North Adams school system. She serves as director of music at the First Congregational Church of Dalton and also provides private instruction in voice and piano.

Kastrinos is credited with creating curricula for beginning and advanced theater, musical theater, public speaking and the International Baccalaureate theatre arts course. He has directed at Hofstra University, Dowling College and the State University of New York at Farmingdale, and was one of the founders of Take-One Theatre on Long Island, where he served as artistic director for 12 years. He was stage manager for Seiskaya Ballet’s performances at Stony Brook University’s Staller Center for 29 years and, over the course of his career, has directed in excess of 175 plays, musicals, one–act festivals and musical revues. He has been awarded the New York State English Council Theatre Excellence Award, the Long Island Educational Theatre Association Award and a Suffolk County Proclamation for Service to Theatre.

Tickets are $5 and are available at the door, the church’s Green Gargoyle Thrift Shop and the church office. For tickets and more information, contact the First Congregational Church of Dalton at (413) 684-1715.

West Stockbridge — Close Encounters With Music will present Caryl Clark, professor of music history and culture at the University of Toronto, in a talk titled “Reconsidering the Legacy of Haydn” Sunday, Nov. 11, at 3 p.m. at the West Stockbridge Historical Society.

In her talk, Clark will provide a window into the breadth and greatness of Haydn’s work: his sacred music, comic operas, quartets and symphonies as well as the changing social, cultural and political spheres in which he studied and worked.

Clark studied music history at the University of Western Ontario, McGill University and Cornell University; and holds diplomas in piano performance and pedagogy from the Guildhall School of Music and Drama and the Royal College of Music. Her research and teaching interests include enlightenment aesthetics, gender and ethnicity in opera, the politics of musical reception, Haydn studies, the social history of keyboard instruments, and approaches to musicology. Author of “Haydn’s Jews: Representation and Reception on the Operatic Stage” and commissioning editor for “The Cambridge Companion to Haydn,” she is currently writing a book on Haydn, Orpheus and the French Revolution, and co-edited “The Cambridge Haydn Encyclopedia.”

Tickets are $20. Light refreshments are included. For tickets and more information, see the Berkshire Edge calendar or contact Close Encounters With Music at (800) 843-0778 or cewmusic@aol.com.

A dramatic story of the Women Airforce Service Pilots of World War II, “Decision Height” tells the story of Virginia, who contemplates a life-altering decision while she and her fellow trainees overcome their initial discomfort with each other to form a sisterhood. Ultimately they discover what it means to be a woman in the military and their essential role in wartime. “Decision Height” received the 2013 Kennedy Center American College Theater Festival New Play Award and premiered in January 2014.