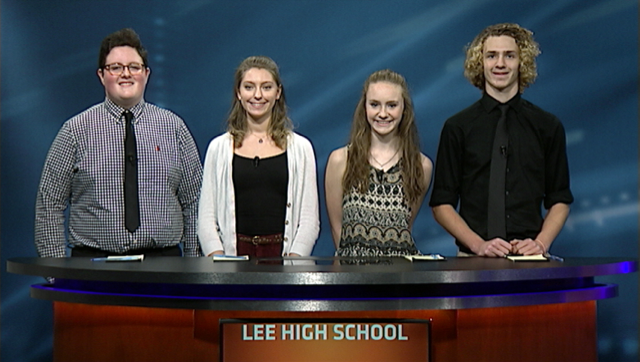 The Lee High School quiz team will appear on the Jan. 5 episode of 'As Schools Match Wits' on WGBY. Image courtesy WGBY

Westfield — A team of students from Lee High School will participate in the public television quiz show “As Schools Match Wits,” which will air on WGBY Saturday, Jan. 5, at 7 p.m. The episode will be rebroadcast Sunday, Jan. 6, at 10:30 a.m. and will also be available for subsequent online streaming.

Each season, up to 50 schools go head-to-head in qualifying matches to see which team can earn the greatest number of points. The eight highest-scoring teams of the season then compete in playoff matches to determine the season’s champion, which is then awarded the coveted Collamore Cup, named for the show’s creator.

ASMW is a collaborative production of WGBY and Westfield State University. Produced using WSU facilities, students in the communications department serve as the production crew. WGBY supplies the professional producer, broadcast, marketing and technical support. Broadcast weekly during the school year on WGBY, questions for the show are written by longtime ASMW writer and judge Todd Rovelli along with WSU faculty and students in accordance with Massachusetts and Connecticut state high school curriculum guidelines.

‘A Forgotten History’ to explore history of black community in Salisbury

In 2016 in their newly purchased house on Farnum Road, McEachern and his wife, artist Danielle Mailer, discovered, hidden in the attic, a cache of photographs from the 1930s to the 1970s. The home and photographs were previously owned by the Fowlkes family, one of several black families who lived in the mostly white town. Recognizing the historical importance of the images, McEachern developed a proposal to use the photo archives as a starting point to give the course “Black History in Rural Connecticut” at Salisbury School, also resulting in two exhibitions at the school. Said McEachern: “This is a story of people living their lives in a community, working, contributing, fitting in, or not. There is a far more diverse history in Salisbury than you would expect when you look around town in 2018.”

McEachern is a Connecticut native and jazz trombonistwho has toured and recorded three CDs for PolyGram with blues legend Clarence “Gatemouth” Brown. He has also worked and recorded with minimalist composer La Monte Young. He is a member of the Connecticut Improvising Composers Project and is the chairman of Salisbury School’s music department. He is a busy freelance musician in the tri-state area and has been a teaching artist at Litchfield Jazz Camp since 1998.

Actors living within a 50-mile radius of Great Barrington are encouraged to audition. Rehearsals will run Monday, Jan. 28, through Thursday, Jan. 31. Performances will take place Friday, Feb. 1, at 7 p.m. and Saturday, Feb. 2, at 2 p.m. and 7 p.m. For more information regarding the audition, audition slots and details on how to prepare, those interested are asked to send a resume, headshot and contact information including email address and phone number to tristan@berkshireplaywrightslab.org or call (413) 528-2544.

The event is free and open to all. For more information, contact Natalie Narotzky at nnarotzky@gmail.com.