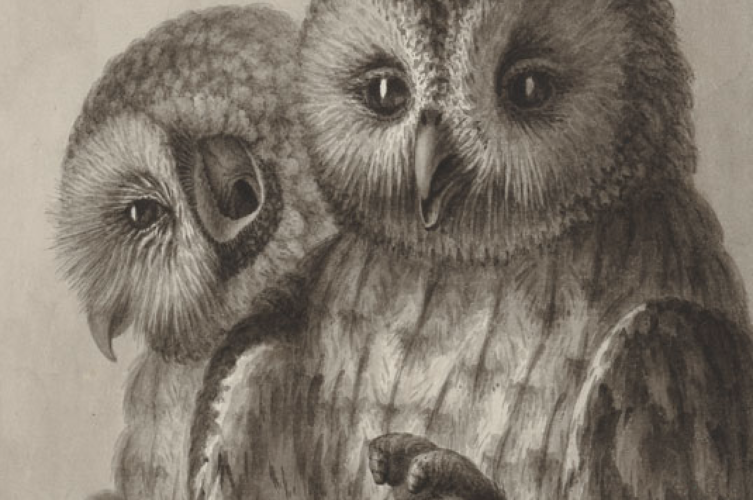 Williamstown— Promenades on Paper: Eighteenth-Century French Drawings from the Bibliothèque nationale de France is on view at the Clark Art Institute from December 17, 2022 through March 12, 2023. A free opening lecture by Clark-Getty Paper Project Curatorial Fellow Sarah Grandin will be held for free on Saturday, December 17 at 2 p.m. in the auditorium.

This is the first-ever exhibition of eighteenth-century French drawings from the collection of the National Library of France. The Bibliothèque nationale de France (BnF) is a vast and encyclopedic library collection, so extensive that some areas of its holdings have yet to be fully explored.

The exhibition, Promenades on Paper: Eighteenth-Century French Drawings from the Bibliothèque nationale de France, includes a selection of eighty-four studies, architectural plans, albums, sketchbooks, prints, and optical devices that expand our understanding of drawing as a tool of documentation and creation in the age of Enlightenment. These extraordinary works of art span the domains of natural history, current events, theater design, landscape, and portraiture. Displayed together, they immerse audiences into the world of eighteenth-century France—a world shaped by invention, erudition, and spectacle. Works by celebrated artists of the period such as François Boucher and Gabriel de Saint-Aubin are featured alongside exquisite drawings by unexpected practitioners, including female printmakers, royal children, and visionary architects.

The Clark Art Insitute is open 10 a.m. to 5 p.m. Tuesday through Sunday.

An intimate evening of standards performed by a “Django-esque”-group of two guitars, violin, bass— John Pizzarelli and Jessica Molaskey. Travel back to the days of the Hot Club of France and Reinhardt and Grappelli.

John Pizzarelli, the world-renowned guitarist and singer, has established himself as a prime contemporary interpreter of the Great American Songbook and beyond, with a repertoire that includes Joni Mitchell, Neil Young, Tom Waits, Antônio Carlos Jobim, and The Beatles. He has been hailed by The Boston Globe for “reinvigorating the Great American Songbook and re-popularizing jazz.” The Toronto Star pegged him as “the genial genius of the guitar.” And The Seattle Times saluted him as “a rare entertainer of the old school.”

Learn about the “Many trails of the Stockbridge-Munsee Mohicans”

Bennington— The Bennington Historical Society is hosting a presentation about the history of the Mohican People of the Berkshire region on Sunday, December 18 at 2 p.m. at the Bennington museum.

This event is free and open to the public. More information available here.

Pittsfield— Berkshire Environmental Action Team will present their monthly Pittsfield Green Drinks Gatheirng on Tuesday, December 20 at 6 p.m. The public is invited to discuss the organization’s important work of this past year and to explore what comes next as the new year approaches.

The Berkshire Environmental Action Team hope to get Pittsfield residents involved in their upcoming air quality monitoring; how they’re currently working with the City to remediate pipes that discharge pollution into the Housatonic River; the findings from coldwater streams monitoring; and next steps in their continuing fight to shut down peaking power plants.

BEAT is an environmental nonprofit located in Pittsfield that was established in 2003. The organization does a broad scope of environmental work including improving wildlife movement corridors, monitoring water quality, fighting for clean and equitable energy, and cleaning up the environment through organized cleanups.

This free event will take over Zoom. Registration is required to join: tinyurl.com/Dec2022-Green-Drinks

Reed Foehl was raised in a small New England town whose folk/Americana music tells stories with a voice that pushes boundaries while paying homage to tradition. Foehl recently released his sixth studio album – “Wild Wild Love” – recorded with The Band of Heathens.

Singer/songwriter Putnam Murdock will open the show with a combination of old-time folk, country and blues music. His songwriting presents an honest voice of Americana music. Murdock performs around the northeastern US and is expected to release a new record in early 2023 titled Long Time To Make Old Friends, that contains all songs written with long-time friend and co-writer Foehl.

Murdock and Foehl have been writing songs together since 2001 and grew up with parents who played in a country bluegrass band together for 25 years.