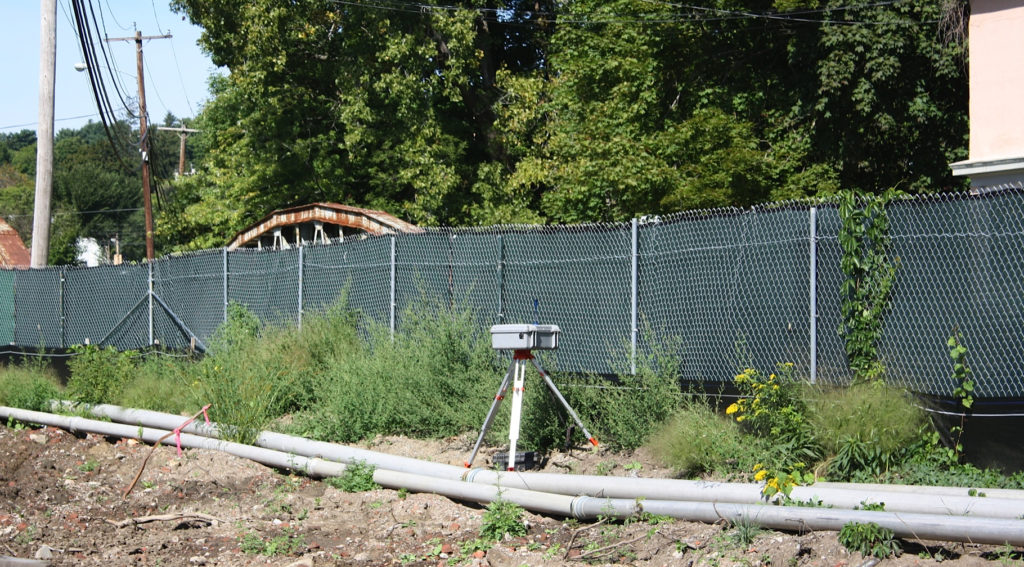 Heather Bellow
Along Bridge Street a dust monitor was installed at the former Log Homes site to measure air-borne debris that might emanate from the cleanup of the PCP- and dioxin-contaminated property.

Great Barrington — Great Barrington waits and wonders as a pioneering bioremediation process in the center of town approaches its final stages. Everyone is asking: will it work?

Now that tilling and plowing fully resumed last Monday at the PCP- and dioxin-contaminated former New England Log Homes site along the Housatonic River on Bridge Street, the innovative cleanup stands a chance of completion before winter sets in. Heavy July rainfall interfered with work at the 8-acre site, leaving unturned soil that created odor issues, prompting the Massachusetts Department of Environmental Protection to issue a notice of noncompliance to the Community Development Corporation of Southern Berkshire (CDC), the owner of the property. 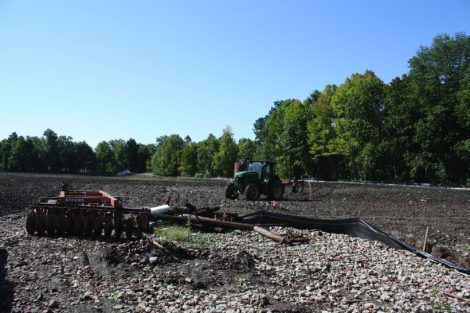 Tilling the soil to activate the bacteria breaking down the PCP and dioxin contamination continued this week.

The notice was issued in July after dust from applications of soil amendments and the bioremediation product known as the “Factor,” blew across the street from the site. Some nearby residents made complaints about unpleasant odors, and work at the site was on and off again. The CDC developed an odor and dust-monitoring plan, and state officials have allowed the work to continue.

“Our biggest challenge has been dealing with the weather,” said CDC Executive Director Timothy Geller, adding that it remains to be seen how it has “affected the efficacy of the process.” 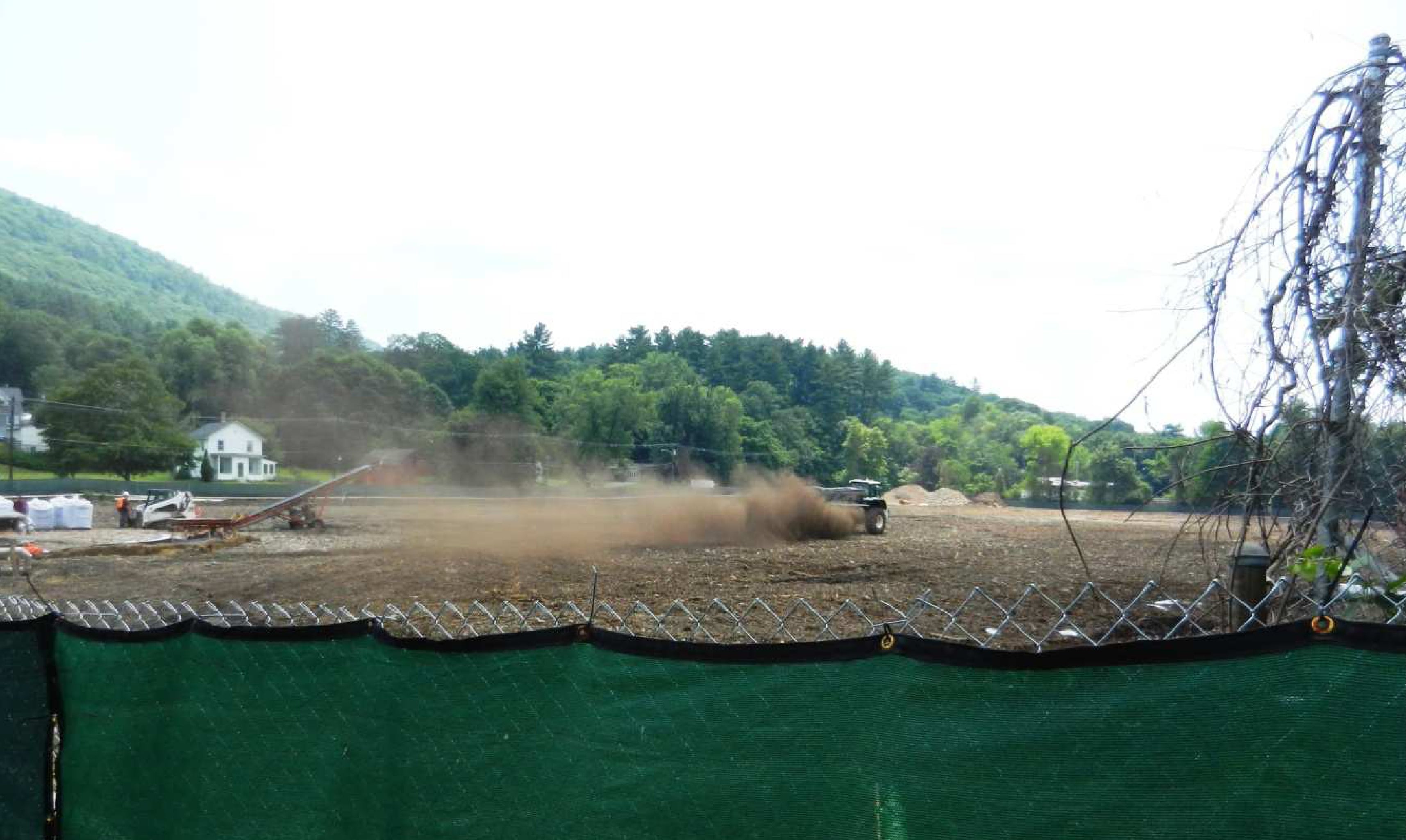 Dust was blown from the original application of the ‘Factor’ and subsequent tilling of the Log Homes parcel.

The CDC brought in a certified industrial hygienist from New Jersey’s URS Corporation as part of the plan to monitor odors. Last Monday and Tuesday (September 8 and 9) a URS representative was on site to find odors and take air samples to determine their source.

Last Monday, the entire 8-acre site was “deep plowed” and irrigated, said Christopher Young, president of Biotech Restorations, the North Carolina-based company that developed what Young calls a “Factor” to help native bacteria degrade the contaminants. July’s record rainfall made the soil impossible to work and sent the bacteria into anaerobic mode, creating the odors and frightening a handful of abutting residents, who complained to MassDEP.

In order to solve the odor problem, the soil required turning and aerating to shift the bacteria back into aerobic mode. A key to this novel bioremediation process is to work the soil every two weeks, then allow the bacteria to degrade the contaminants in the interim. 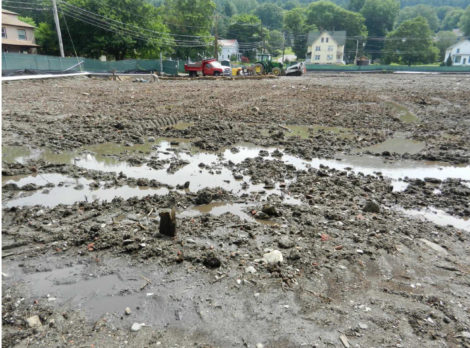 After torrential rains in July, standing water interrupted the bioremediation process, resulting in odors drifting from the site into the nearby neighborhood.

Last Monday, said Young, “there was no odor except the damp earthy smell that’s typical of our cleanup projects.” Indeed, a walk and some sniffing along the Bridge Street site last Wednesday confirmed this. And inside the site, where a tractor tilled away, there was, oddly, almost no smell at all.

URS took baseline air samples with “space age equipment,” said Geller, with results ready after about five business days from the sampling. Results for airborne dioxins — should they be present — has a longer turnaround time of about 15 days.

While the CDC and Biotech maintain there is no health risk from the odors, the pungent smell that wafted from the site alarmed a few residents. MassDEP, however, made no changes to the health and safety plan for workers as a result of the odors, said Geller. No one was required to wear protective masks or suits, added Young.

“My sense,” said Geller, “is that the whole reason for going this direction (air testing) is to collect data to show categorically that there’s no health and safety risk.”

But there have been a handful of unhappy residents, one of whom has accused the CDC of trying to minimize the extent of odors, the potential health risks, and the general impact of the cleanup.

“He is hoodwinking the community,” said 20-year Pine Street resident Alice Lahnstein, of Geller. Lahnstein was one of four residents who had made “nuisance odor” complaints to MassDEP.

Both Geller and Young have acknowledged that they might have been more proactive in explaining the process to immediate neighbors, but were not prepared for the high winds and rain that have dogged the project from the get-go.

“The odors took us by surprise,” said Geller. He and Young held a meeting at the Mason Library in August to explain the reason for the odors and calm fears that they might be dangerous.

In response to complaints, Geller said the CDC surveyed 30 homes near the site in mid-August, asking residents: “Over the last several weeks, the odor has dissipated considerably. Is the odor currently an issue for you and if so, how much of an issue?” Four residents said the odor was “an issue, but tolerable.” Twenty-six said the odor was “not an issue.”

The survey results indicated that three nearby residents had experienced physical symptoms — nosebleeds, headaches, nausea, and respiratory issues — that they attributed to the odors.

As for the safety of Biotech’s “Factor,” Geller said that it passed review by scientists from the MassDEP and CDC’s Licensed Site Professional (LSP), Ransom Engineering, a brownfields restoration specialist, whose “license is on the line (for safety).” 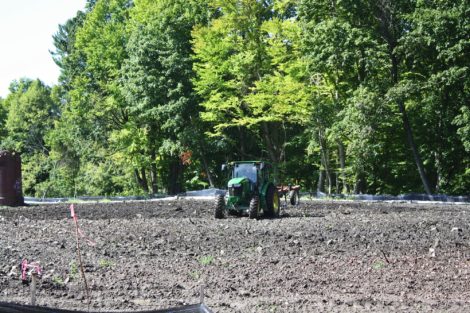 A John Deere tractor from Thistle Doo Construction of West Stockbridge turns over the soil at the Log Homes site this week, on a calm and dry day.

The CDC and Biotech had planned to apply lime to the site last week to neutralize any remaining odor by bringing the pH up to “sweet” soil levels. Contractor issues and wind prevented the application, as MassDEP requires that dust — from any source — does not leave the site, particularly after granular dust from soil amendments hit cars and porches on Bridge Street on a windy day in July. Those amendments were organic materials; nitrogen, compost and lime, and did not contain any of the highly chlorinated compounds — PCPs or dioxins — which Young, a former chemist who worked for Dow Chemical, says bind strongly to the soil and stay there. 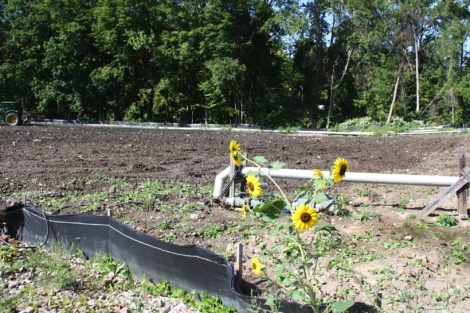 To mitigate the creation of dust during tilling, a network of irrigation pipes has been installed to dampen the soil.

Young said he is gun-shy about wind. Anything 10 miles per hour or above will halt an application. The lime application was moved to Tuesday. Young said he would now play catch-up to recover lost time. He had expressed some disappointment last month that work might have to continue into the spring, as the bacteria require warmer temperatures to do their job, but now he says the results of the project could be apparent by the end of October, beginning of November.

Everyone is wondering: will it work? Great Barrington selectman Ed Abrahams has said that it is “almost too good to be true,” and reminds him of “one of those later Superman movies where all the nuclear weapons are gathered and thrown into the sun.”

If the bioremediation process at the site does work, it could have far reaching ramifications for pollution cleanup nationwide, including possible consideration by the EPA for removing General Electric’s PCBs from the sediment at the bottom of the Housatonic River. Bioremediation at the Log Homes site costs only a fraction of the traditional dredge-it-up and haul-it-away method of toxic waste management.

Soil samples will be pulled this week, said Geller, and results will come in over the next couple of weeks.

“Preliminary” results should be available by the end of September. “But we really don’t know what to expect,” he said. “We haven’t been able to carry out the process as it was prescribed. We’ll just have to see.”

— Mark Twain
Read next: Bits and bytes from the Berkshires