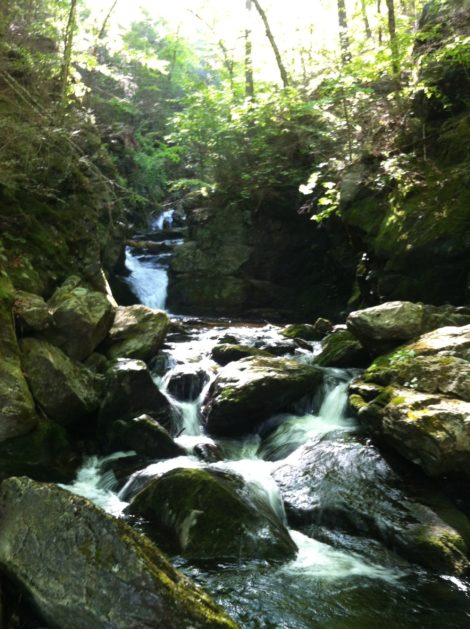 Daniel Bellow
Sages Brook in Sages Ravine in Sheffield would have been stripped of its sources of water had the pump storage station proposed for Mount Washington by Northeast Utilities been constructed.

Editor’s Note: This is the second in a series of articles recounting the history of environmental activism in the Berkshires.

On Feb. 9, 1970, readers of The Berkshire Eagle awoke to a headline screaming: “Land Grab by Utilities.”

It was true: The electrical conglomerate Northeast Utilities had proposed to construct the world’s largest pumped storage hydroelectric facility, drowning Plantain Pond in the heights of Mount Washington and most of Sheffield south of the village under two lakes connected by a 34-foot pipe rammed up the Schenob Brook watershed.

The economy was humming and there were fears of power shortages at times of peak demand in the Northeast. Northeast Utilities, just completing an impressive array of nuclear power plants, proposed to solve these problems by pumping water uphill from the lower reservoir with extra power that could not be stored when demand was slack, then releasing it through a series of turbines to generate power at times of peak demand. 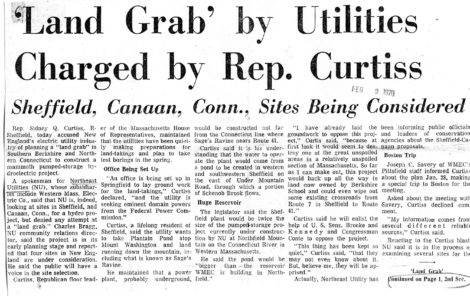 The headline and article in The Berkshire Eagle on Feb. 9, 1970.

The company’s promotional literature touted pumped-storage hydro as “the handmaiden of nuclear power,” recalls William Morrill, who was the first director of the Berkshire-Litchfield Environmental Conservancy Council (BLECC), the cross border group that immediately formed to oppose the project. Northeast was also considering Canaan Mountain and the Wangum Brook watershed, just over the line in Connecticut, for the same project.

Starling Childs of Norfolk, the current president of BLECC, said the dual site plan was part of Northeast’s effort to split the opposition, and the cross-border nature of the citizen group “was a big part of thwarting their plans. People on each side of the line realized that if they didn’t get together, they were going to get whipsawed.”

The cost of this mammoth undertaking — it would have been twice the size of the utility’s Northfield Mountain facility, still in use today – was put at $185 million, more than $1 billion in today’s dollars. It would have involved digging an immense cavern underneath the mountain for the power plant, and building enormous dikes to impound the lake in the Schenob Brook Swamp, not to mention the superhighway-sized right of ways for the miles of high-tension wires to carry the vast amounts of electricity in and out of the gargantuan sub-station on Under Mountain Road, which, along with Route 7, would need to be relocated. Reporters quickly ran out of superlative adjectives to describe it. 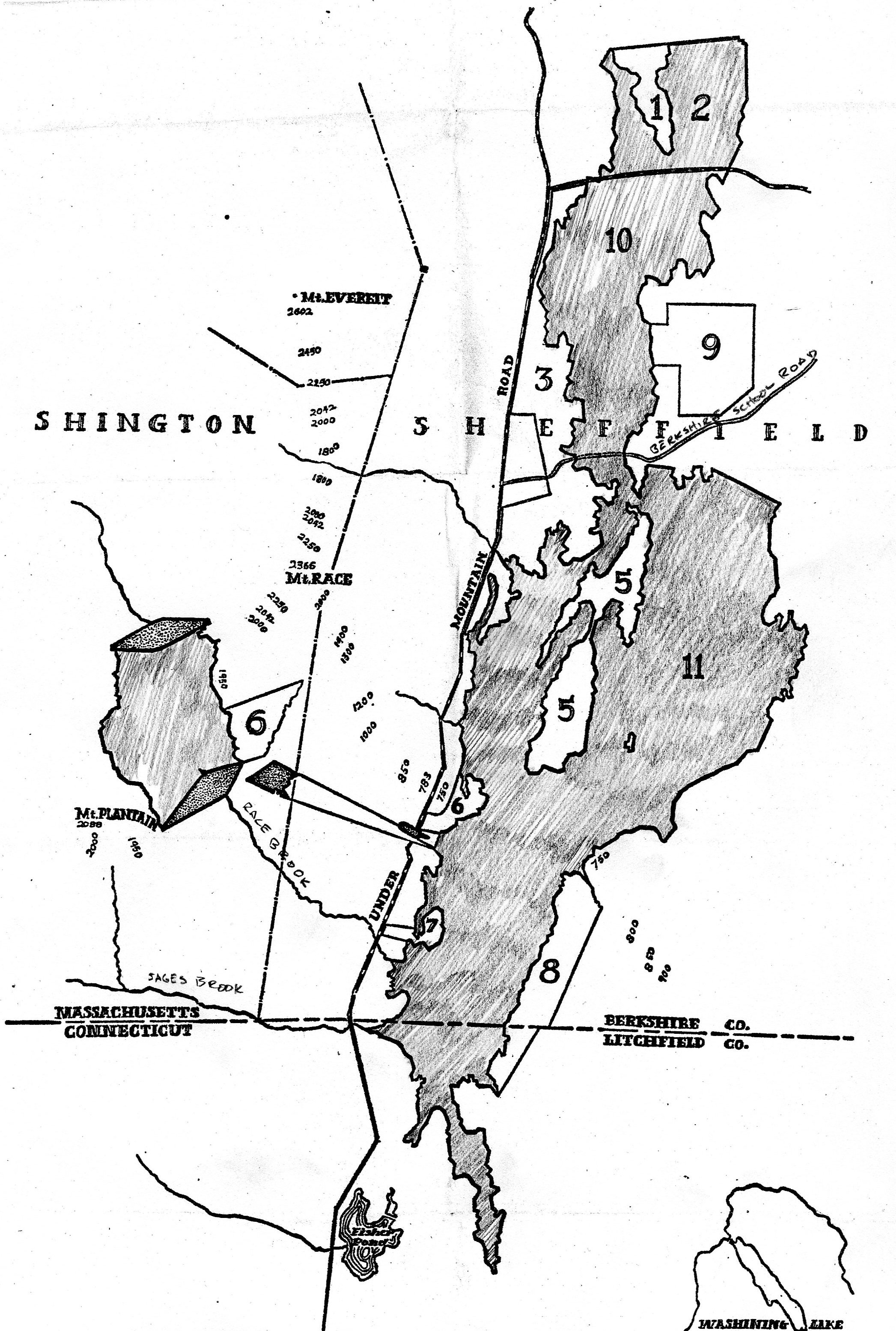 From the Berkshire Eagle of1970 a sketch of the area (shaded) in Sheffield that would have been flooded by the pump storage project.

The swamp, as Mount Washington naturalist Morgan Bulkeley IV was quick to point out, was a rare calcareous fen, filled with flowering plants of every description, wading birds and fur-bearing animals. There were enormous trout in there for those anglers hardy enough to brave the clouds of mosquitoes. Just as the summit of Mount Greylock is a little piece of the Arctic biome at the top of Berkshire County, so Schenob Swamp is a little piece of the Carolinas at the bottom, sheltering flora and fauna seldom seen in these latitudes. 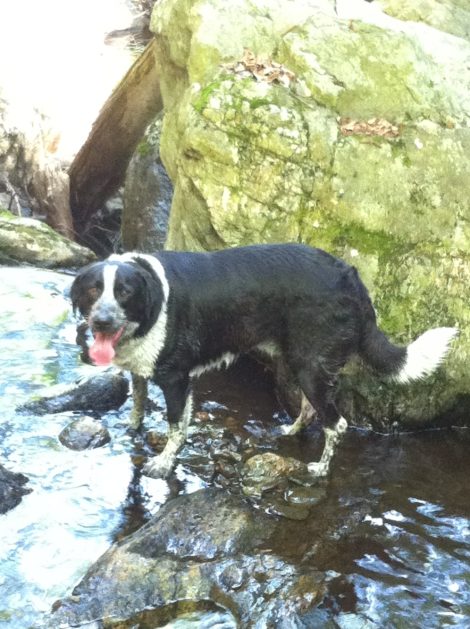 The author’s dog, Ringo, enjoying Sages Brook on an expedition to the site.

Even more precious was Sages Ravine, a narrow defile where the Sages Brook makes a series of waterfalls and deep pools between sheer rock walls, to which ancient hardwood trees cling precipitously. It’s one of those places where you feel a cool breeze on the hottest days of summer, with the sunlight filtering down through the canopy of leaves. The hike to get in, whether you come from the bottom or the top, is best described as strenuous. The sides of the ravine are steep and choked with blown down trees and the footing can be treacherous, but it is hands down without a doubt the most beautiful place in the Southern Berkshires.

The giant utility did its best to appear sensitive, pledging that it would not begin negotiating with landowners until it had decided on one site or the other, and averring that it hoped to avoid using the power of eminent domain if at all possible. Support for the project was expressed by the Mount Washington selectmen, who reasoned that the power plant would exceed the aggregate value of all real property in town by an exponential factor, and accordingly lower the tax bills of those residents who would not be bought out outright. This too, said Childs, was part of the utility’s two state plan – to tempt one town or another into support.

Bulkeley recalls a session at which Northeast Utilities attempted to explain and justify its proposal:

“The crowd gasped and it galvanized opposition in our town — I’ll bet they never did that again.” 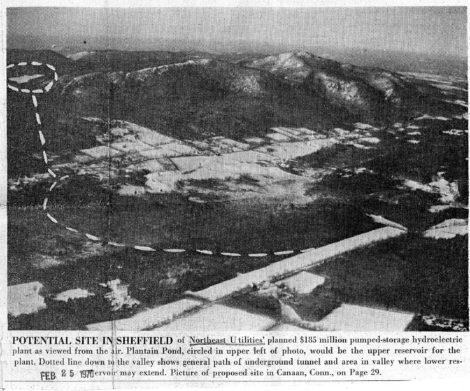 An aerial view of the site where Northeast Utilities proposed a mountaintop pump storage facility, ass it appeared in the Feb. 25, 1970 Berkshire Eagle.

BLEC jumped right to its task, raising money and enlisting support from prominent local citizens. “There were a number of very formidable people they attracted in opposition,” Morrill recalls. These included Earl Newsom, a retired vice president of Standard Oil, and Bill Schrenck, a senior partner at the influential law firm Cravath Swain and Moore, who owned a summer place nearby. “These were sophisticated people,” Morrill said of the men who hired him. “They were used to dealing with large forces, and they were not intimidated.”

Schrenck wrote an eloquent protest to the Federal Power Commission, which was printed in its entirety as a double-page advertisement in the local newspapers. “The two sites lie in one of the most unspoiled regions of lower New England,” Schrenk’s protest read, describing the trout streams and rare plants. This was no mere emotional appeal, as it had been for Greylock seven years earlier, for the National Environmental Policy Act, passed by Congress just the year before, actually required the Power Commission to demonstrate “a basic concern for the preservation of natural beauty and other natural values – a concern not subordinated to utilitarian factors,” as it considered the project.

Schrenk’s protest also pointed out that a pumped storage installation actually takes more power to operate than it generates – three kilowatts expended for every two created. It noted that during peak summer demand time, the little streams upon which the project would depend are nearly dry, and that the reservoirs would lose water not only through evaporation, but through the cracks in the bedrock endemic to this part of the world. (There is a lake up in the Pittsfield watershed that contains no water despite the millions of dollars pumped into building an enormous dam in the 1960s. All the water ran out through the cracks in the rocks, much to the embarrassment of certain engineers.) 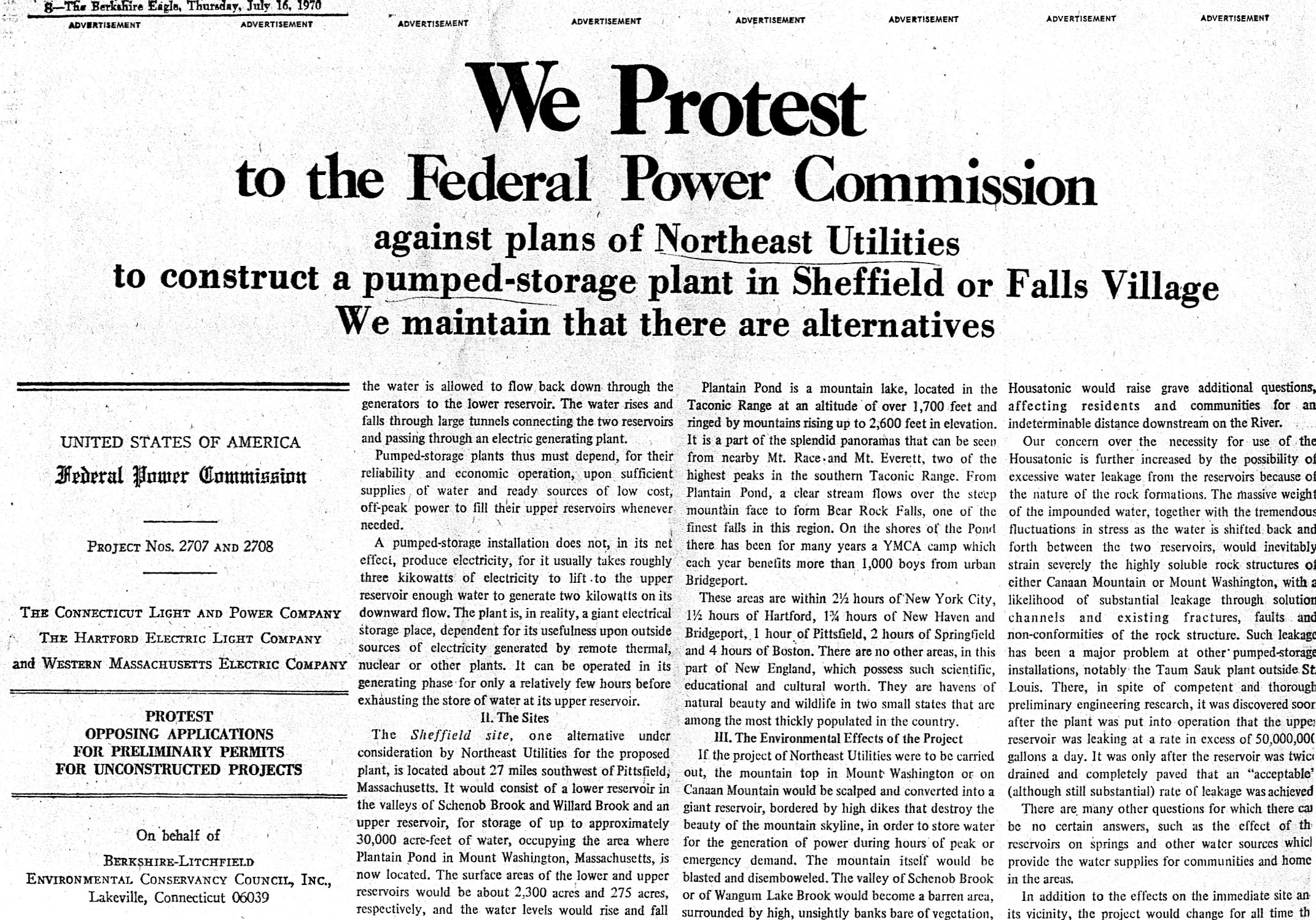 An advertisement proclaiming the opposition of the Berkshire-Litchfield Environmental Conservancy Council to the Northeast Utilities project.

BLEC was all set to become an intervener in the NEPA permitting process, but things never got that far.

First, the Sheffield site was dropped because guess what: the rock underneath the mountain was found unsuitable for hollowing out the giant cave for the turbines. The focus now was on Canaan Mountain, which is the height you see as you drive on Route 7 south of the village, but the plans kept getting postponed. In 1971, demand for electrical power slowed. In 1972, Northeast’s accountants said the plant would cost more than $300 million, which, for those who are counting, would be nearly $2 billion today. In 1973 came the Arab oil embargo, which threw the economy into recession. Plans were postponed again, the company said, because of “increased environmental controls by the government, a slackening of power demand, the use of alternative means of power production and an absence of sufficient nuclear generating capacity to serve the pumped-storage station…”

“It petered out,” Morrill says, “but it took a long time to peter out. Companies that spend this much money and effort on a plan, they don’t just throw it in the trash. It goes up on a high shelf somewhere.”

In 1978 came the accident at Three-Mile Island, and nuclear power plant construction in the United States came to a screeching halt. “They were counting on cheap power to pump the water up the hill, but it didn’t work out that way,” Morrill reflected. “If they had built it, it would have sat up there like a monument and they wouldn’t have had the energy to make it work. These were global factors at work, so environmental groups can’t take credit for stopping it, although we did delay it. But if it hadn’t been for the oil embargo and the collapse of nuclear power, it would have been tough for a small group to stop it. This is the most powerful interest in the country. To say it would destroy the valley and the mountain, that might not have been enough.”