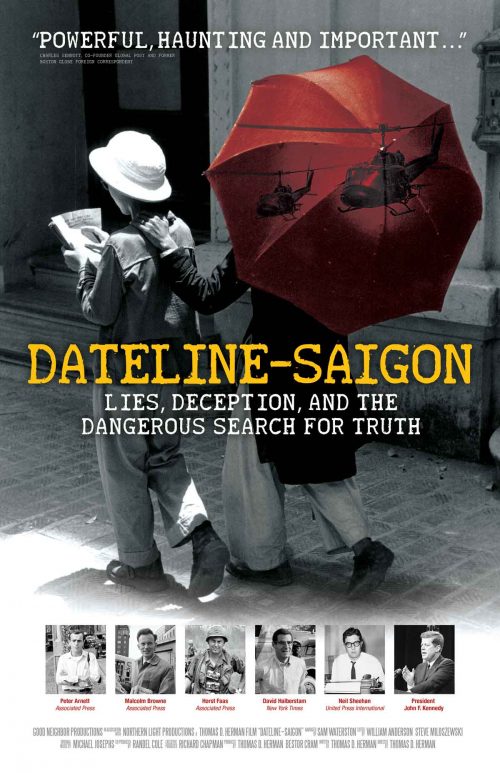 Five journalists unveil how they struggled to reveal the truth in response to the lies being told by the American Government. Sounds familiar doesn’t it? Although the events being discussed in Tom Herman’s film Dateline: Saigon, take place more than four decades ago, their contemporary relevance is undeniable in our modern political climate. Tom Herman’s film profiles the Pulitzer prize winners; David Halberstam of The New York Times, Malcolm Browne, and Peter Arnett, of the Associated Press, legendary photojournalist Horst Faas, UPI’s Neil Sheehan, and the impact of their revolutionary coverage of the early days of the Vietnam war.

I had a chance to talk with Herman who commented on the film’s lengthy production, taking place over 12 years where he was able to interview dozens of different journalists, amassing a vast collection of stories Herman only wishes he could fully share. He mentioned how this film was very much process based, and that initially he didn’t really know what type of film he was going to create. The story emerged as he puts it, “like a sculptor’s slab of marble” slowly forming into the powerful piece it is today. Herman said how “the film is not about Vietnam, but instead about the power of journalism, and the power of truth.” Herman’s film elevates these five journalists, in the same vein as films like The Post, All the President’s Men, and Spotlight, showing the immense courage it takes to challenge an established narrative.

One thing that they struggled with, along with Herman himself, was the fact that they had to challenge their own ideas of the war first, before challenging the public’s. “They went over there and initially were all reporting favorably, so they all went through something of a crisis of conscience themselves.” Herman talked about how the initial attitude of the nation, the journalists included, was a result of the of the black and white politics of the cold war. “I remember when I was in 8thgrade, arguing with a camp director about the importance of stopping the Communists and supporting what our government was doing… A few years later, I was marching in the streets against the war.” And it is this dynamism that is at the center of the film, “I direct my documentaries like feature films, I look for the character, and, not to say I disregard the story, but ultimately it is that characterization, that change that draws me.”

Herman’s film reminds us all the difficulties of truth, and how we must constantly re-evaluate our own ideas and beliefs.  He remarked how “the film helps to detail the continuous and on-going struggle each generation has for a free press.” Showing that the path to a free press is not an inherent right, but one that must be secured. New York Times Journalist, David Halberstam says it best in the film, “When the government is telling the truth, reporters become a relatively unimportant conduit to what is happening. But when the government doesn’t tell the truth, begins to twist the truth, hide the truth, then the journalist becomes involuntarily infinitely more important.” In our contemporary news climate, Herman’s film shows us that, the journalist, the seeker of truth, is more important than ever.

Dateline: Saigon joins the ranks of the many other incredible films featured this year at Berkshire International Film Festival, a testament to the work Kelley Vickery and her team have done as they continue to elevate BIFF to the upper echelon of the festival circuit.

Dateline: Saigon will be screened at the Triplex Cinema in Great Barrington at 11:15 a.m. on Friday, June 1, and at the Beacon Cinema in Pittsfield at 9:15 a.m. on Saturday, June 2. The director, Tom Herman, will be in attendance, as the film competes in the Juried Prize Competition. I hope to see you there!