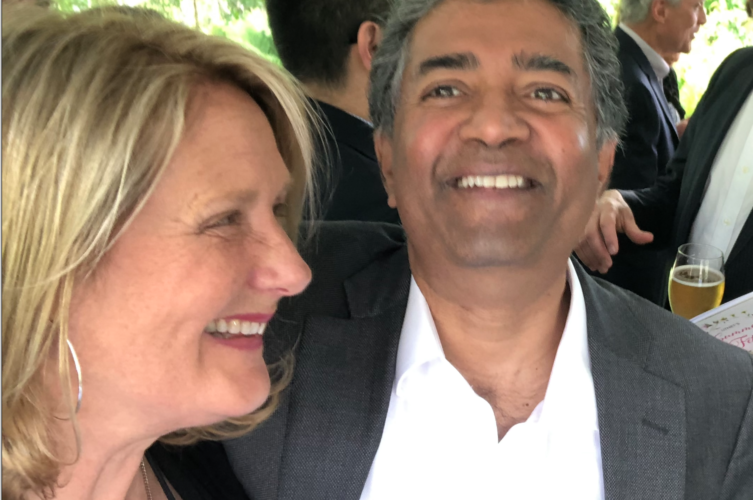 Bhimashankar Venkata Nitta and Alison Larkin at the Literacy Network gala in 2019.

Bhimashankar Venkata Nitta was a brilliant, unique man who was passionately devoted to bringing clean energy to Vermont, the Berkshires and beyond. He died suddenly on August 6, 2020 at 9 a.m. at the Albany Medical Center after being in a coma for two days following a cardiac arrest. He was 54 years old.

Bhima, son of the late Dr. Krishna and Sita Kunapuli, was born on October 12,1965, in Visakhapatnam, Andhra Pradesh, India. Bhima was top of his university undergraduate programming, winning five gold medals for excellence before emigrating to the US to earn a Ph.D in chemical engineering from RPI, where he was in the top 1 percent of his class. He later obtained a Certificate in Systems Engineering from MIT. He was employed by GE early in his career, then spent several years with BOC Gases, where he won awards for innovation. At United Technologies, he won patents for his designs in fuel cell and clean energy technologies.

Deeply concerned about the environment, he walked away from Corporate America and, after serving for seven years as an energy consultant at Efficiency Vermont, he launched his business Power Guru LLC, a highly respected and community-orientated solar company that also partnered with Tesla to install power walls.

Bhima worked tirelessly, patiently and passionately to help his customers and community to gain energy independence and to promote clean, sustainable power for everything from a tiny house mobile food cart to large scale community solar projects and beyond. His excellent and devoted team at Power Guru will continue on with Bhima’s mission.

He was a SCC certified racer for many years. He was a passionate cricket player, and started the RPI cricket club. He was also extremely well read, and loved Shakespeare as much as he loved Monty Python.

There will be a celebration of Bhima’s life once it is safe to be together.

Meanwhile, in lieu of flowers, please consider adopting some of these changes if you haven’t already.