A meeting at Railroad Street Youth Project in Great Barrington, which is partnering with the Center for Motivation and Change in New Marlborough to present a three-part training session for parents who are concerned about substance use in their children.

Teens in South Berkshire have, historically, reported higher rates of substance use than their peers elsewhere in the state and country. On the bi-annual Prevention Needs Assessment Survey, local 8th, 10thand 12thgraders anonymously report on behaviors such as alcohol, marijuana, cocaine and heroin use, and while, on recent surveys, heroin use, at least among those cohorts, remains blessedly low, rates of binge drinking and past 30-day marijuana use were, for the most part, high, though at least one indicator was going down. Over the past three PNAS test intervals, binge drinking among 12thgraders has remained more or less steady in the low 30 percent range, while binge drinking for 10thgraders decreased from 20 percent to 13 percent among 10th graders. As for regular marijuana use, one quarter of the 10th grade class used regularly, as did 39 percent of 12thgraders in 2017. To read the survey, click here.

Nationally, the country lumps overdose deaths together, though the 64,000 deaths by overdose commonly reported for the year 2016 includes both suicide by Tylenol and accidental overdose by Fentanyl. The number of opiate overdoses across the U.S. was actually 41,000, while, during the same period, 90,000 died of alcohol-related causes, and 480,000 died of nicotine.

But whether legal, semi-legal or illegal mind and mood-altering substances can negatively impact young lives. Perhaps you are a parent reading these statistics, knowing your child is included in them. There is a low-cost, evidence-based, humane, common-sensical and loving approach to managing your concerns, and an upcoming training session to help you access it.

The Railroad Street Youth Project’s South Berkshire Community Health Coalition (SBCHC) is partnering with the Center for Motivation and Change (CMC) in New Marlborough on a three-part training for parents who are concerned about their child’s drug and/or alcohol, or parents who would like to learn effective communication skills for that time in the future when drug and alcohol use might occur. The goal of the Coalition is to advance the well-being of the community’s youth and environment by making strategic investments in young people, families and those who guide them.

Iona Smith is organizing logistics for Railroad Street, and Dr. Jeffrey Foote, founder of CMC, will run the sessions.

Foote, a clinical psychologist, has been doing drug treatment and research since the 1980’s, and started CMC in Manhattan fifteen years ago as a large outpatient facility. In 2013, together with Dr. Carrie Wilkens, Foote purchased the former Mepal Spa in New Marlborough for $4.1 million. CMC Berkshire is now a 13-bed in-patient facility, which also does dual diagnosis work with post traumatic stress disorder (PTSD) patients.

Before CMC he ran the Smithers Treatment Center, but got disenchanted. “People working in this field are big-hearted,” he says, but “they are just not using evidence based approaches.”

Before CMC, he ran the Smithers Treatment Center but got disenchanted. “People working in this field are big-hearted,” he says, but “they are just not using evidence-based approaches.”

The first thing to recognize, Foote says, is this: your child’s behavior makes sense. Teens seek novelty and risk. Their dopamine is being processed differently than in the adult brain. They are drinking or smoking or snorting or injecting because the substance use is reinforcing good things for them, or to numb themselves against bad feelings. (He quoted an old Irish saying: “They speak of my drinking, but never my thirst.”)

The fact that their behavior is logical and meets a real need is, he says, the good news. “Their behavior can be shaped, and you can reinforce other behaviors.”

The workshop will cover four main topics: Helping with Understanding, Helping with Self-Care, Helping with Words, and Helping with Actions. Foote starts with extending an invitation to change. Teens are invited into a conversation, as opposed to, say, presented with an ultimatum. “Parents get involved in negative behavior loop. ‘Now you did this! And this!’ Bigger guns don’t work. Take a step back, see this is still your kid. Can you add in a positive reinforcement for positive stuff? Your son came home on time. Say, ‘I appreciate that, thank you for coming home on time.’ Give him a hug and go to bed. You’re not throwing him a party, it’s just a positive nod. It’s really easy to get lost in that negative flow, but people don’t change in that environment.”

An ‘invitation’ approach to change offers choice, and no judgment. In a meditation exercise, for instance, an invitation would sound like, “If you want to keep your eyes open, feel free to do that, while some of us close our eyes.” Or, in a yoga class, “We are going to be coming into a down dog position now. If you’d prefer to move into a child pose, feel free to do that.”

Inviting your child to change is not the same as condemning her or him, but neither is it to be confused with condoning behaviors, either. “We are not saying it’s fine, or it’s horrible. We say, ‘We see it. Is it working for you? Do the benefits outweigh the costs?”

(I asked what Foote thought about one of our local hot-button issues, the ever-increasing availability of legal marijuana, coming soon to your small town dispensary? “It’s going to be a shit show.” He said. “But prohibition didn’t work very well, and spending billions on law enforcement doesn’t seem like a great thing, either. But use rates will go up among underage people. That is undeniable.”) 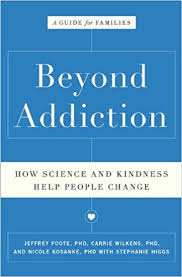 In an affirmation-based communication style, the more specific you can be, the more helpful it is. It’s the difference between, “You’re the best mom ever,” and “I really appreciate the gentle, kind way you dealt with that difficult situation.”

A decade ago Foote was introduced to, and impressed by, the youth-centric work of Railroad Street Youth Project, when he attended a community fair on baseball fields on Bridge Street in Great Barrington, and spoke to then Executive Director Lannie Moore. When CMC’s not for profit wing, with which they aim to develop a sort of army of “parent coaches” around the country, wanted to conduct local trainings, RSYP seemed a natural fit.

Current Executive Director Ananda Timpane says of the upcoming trainings, “Experimentation with and even regular use of drugs or alcohol is sometimes one way youth might cope with everything that is going on for them. At Railroad Street, we’ve seen how much parents can make a difference when this is happening, and how hard it is for parents to find support to be able to positively connect with their child even when they are struggling.”

Foote’s and Wilken’s book, Beyond Addiction: How Science and Kindness Help People Change, came out in 2014, and sets out their, and CMC’s approach, which diverges from traditional interventions. As Foote puts it, “The existing treatment approaches for the most part are not evidence-based and are ideologically driven. When a family says I just found needles, and they call a professional, the standard recommendation would be ‘You should go to al anon meetings,’ ‘You should do an intervention.’ If the kid is young enough, 14-18, send them to wilderness camp.”

All of those things, Foote says, are indeed helpful for some people, but not for everyone, and yet they are the only options offered. “If someone told you that yoga was the only way to get in shape, that’s a trap for you, you feel as though something’s wrong with you. It’s also not true.”

They have been doing parent trainings all over the country, and he sees again and again how families desperate for help with their loved ones feel beaten down by system. There’s even a name for it, “treatment trauma.”

“They feel disempowered, labeled. They are told they are enablers, co-dependent, and told to detach. You don’t have to label your child an addict. Your child’s judgment has not entirely been tossed out the window. They are the same person.” None of this, Foote says, is helpful.

What he works toward, instead, is developing ways, with parents, to stay connected to your son or daughter, and also be kind to yourself. Iona has been talking to high school guidance counselors to find parents who will benefit the most from this training, but there is still a big stigma around the idea of getting help with such a personal dilemma.

As Smith says, “There is such a vulnerability to just signing up to do something like this. People are fearful of being labeled. But that is NOT what this is! This is empowering! You can see you’re not alone.”

What the Coalition and Foote are offering, however, is not a support group, per se, though something like that might organically evolve as a result. It is, rather, help with developing and deploying a new set of skills, answering, “What can we do about the problem?”

The trainings will take place at Berkshire South, on Monday, April 30th from 7 to 8:30 p.m., Saturday, May 5th, from 9 a.m.-4 p.m., and Monday, May 14thfrom 7 -8:30 p.m. The first night will be a presentation of what the evidence-based approach to drug treatment entails, as opposed to what our commonly held ideas about what is supposed to work, but actually doesn’t. The second will run all day, and the third, evening session will be a follow-up piece, with the chance to ask questions based on parents’ implementation of skills they learned previously.

That day of training will be experiential. Like anything else, developing a different style of communicating, and pushing against your own instincts, takes a lot of practice, which participants will get. As Foote says, “You’re going to suck at this, as a parent. This is all new. If we would teach you to play the piano, you’d suck at that, too, at first. You would not be ashamed. If I asked you to play a Mozart piece you’d never seen, you would not feel like a bad person. If I say, can you practice these communication skills I just taught you, though, you would probably feel like a bad person.”

The unfortunate fact is that there will never be enough trained therapists for all the people who could use their services. That’s the idea behind training parents to train parents. Foote’s hope is that if, say, 20 people attend the training, over time perhaps 6 of those people would be interested in doing further coaching with other parents, and so the techniques will spread and take on a life of their own.

The Invitation to Change trainings will take place at Berkshire South Regional Community Center in Great Barrington  Monday, April 30, from 7 to 8:30 p.m.; Saturday, May 5, from 9 a.m. to 4 p.m.; and Monday, May 14, from 7 to 8:30 p.m. The cost to attend $25 for all three sessions, with scholarships available. For more information and to register, contact Iona Smith at iona@rsyp.org.