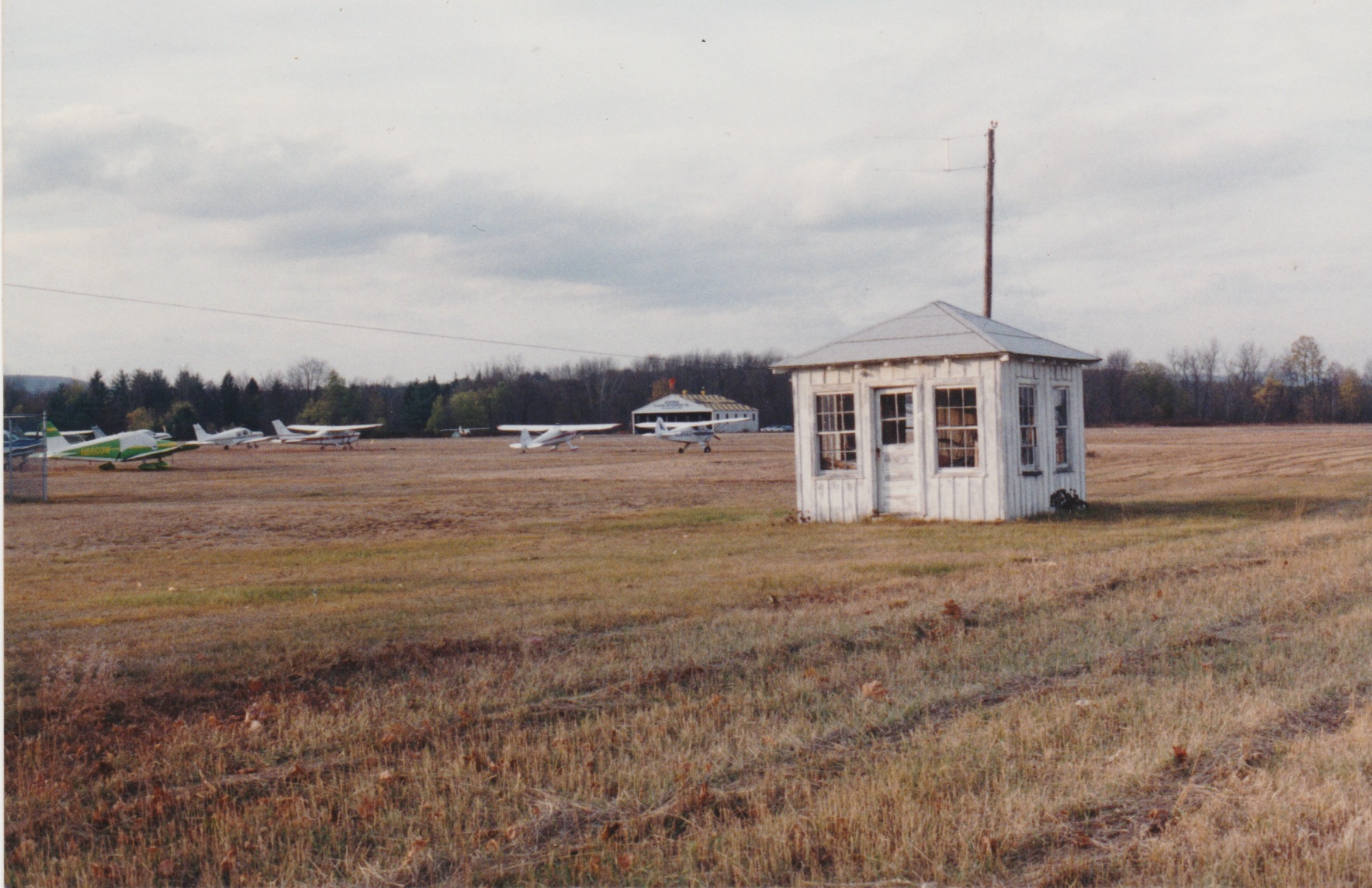 A modest, multi-windowed building once sat at the edge of Great Barrington Airport was constructed for aerial observation. Spotters scanned the skies in shifts, in the Cold War era, alert to Soviet aircraft. Photo: Bernard Drew

Great Barrington — The most striking architecture in Great Barrington and Housatonic is unquestionably the largest as well: the big homes, the rambling mills, the utilitarian farmsteads. But in the shadows of big brothers and sisters, very small buildings served important purposes have stories to tell. Sometimes rich stories.

This town and its northern village wear their history proudly. An early and meticulous chronicler of the community’s past, Charles J. Taylor (1824-1904) lived on Taylor Hill in the white house at the corner of Main and South streets, now home to Finnerty & Stevens Funeral Home. Taylor wrote out the pages of his 1879 History of Great Barrington at a table in a small building just uphill of his dwelling. The structure, with a commanding view of street traffic, is still there, used for storage today.

A nationally known writer, James Weldon Johnson (1871-1938), and his wife, the former Grace Nail (1885-1975), owned a getaway home in the Seekonk section of Great Barrington. Johnson when in town sometimes wrote at Mason Library, and sometimes at a cottage he had built on his property. The former Johnson home is privately owned today. The cottage is still there.

William Stanley’s 1886 experiment in transmitting alternating-current electricity had a profound impact on the nation. Simultaneous with his work — from an abandoned rubberwear factory on Cottage Street — railroad heiress Mary Frances Hopkins had a direct-current system installed in the basement in her new Kellogg Terrace mansion. The loud system drowned out concerts in her music room. The generator, which also served other homes and businesses on South Main Street, was soon relegated to an outbuilding — which survives, attached to a metal Quonset building near Memorial Field.

The upper end of Main Street, from Stanley Park north and around the bend to Belcher Square, supported machine shops, blacksmiths, a laundry, soda bottlers and myriad other small businesses a century ago. One surviving diminutive building is now William Caligari Interior Design’s Linen shop. Initially it was an office for Graves and Hemmes’ construction business.

East of the Brown Bridge, there were two small, free-standing retail shops. Michael Cleary (1939-2014) recalled his mother, Gladys, once rented the easternmost building from Rabbi Jacob Axelrod (1895-1986) and opened a consignment business in the 1950s and also sold “many of her rugs, paintings and other crafts.” That building and the rabbi’s home were razed to make room for Berkshire Bike and Board.

That store and another that survives on the property next door sported false fronts of the style usually seen in Hopalong Cassidy western towns.

Just up North Street, the rabbi for years ran a kosher delicatessen. When I looked in the window in 1998, I could still see the scales and wax paper and other remnants of the one-time business. The deli has since been torn down.

A small building next to the post office in Housatonic has been home to everything from a motorcycle shop to Le Petit Museé.

So keep your eyes open; the small buildings have stories to tell.

The writer will lead a walk, “An Alternate History Tour of Downtown Great Barrington” as part of GB Heritage Day on Saturday, June 18, from 9:30 to 11 a.m., starting at the Mahaiwe Theatre. Participants will hear about aspects of town history not widely known, including Blackstone the Magician appearing at the theater; Henry D.D. “The Human Fly” Roland scaling the outside of the Berkshire Block; and the poultry show held at Town Hall more than a century ago. That same day, Drew will lead another hike, “How to Find Signs of the Iron Industry History in the Woods,” from Fountain Pond State Park, Route 7 north of Plaza Shopping Center, from 1 to 3 p.m. The walk will be on Threemile Hill Trail, with some bushwhacking. Participants will learn about 19th century iron industry and the manufacture of charcoal in the woods. Uphill, moderate terrain, wear good hiking shoes, dress against ticks. Park at state park or roadside turnoff.