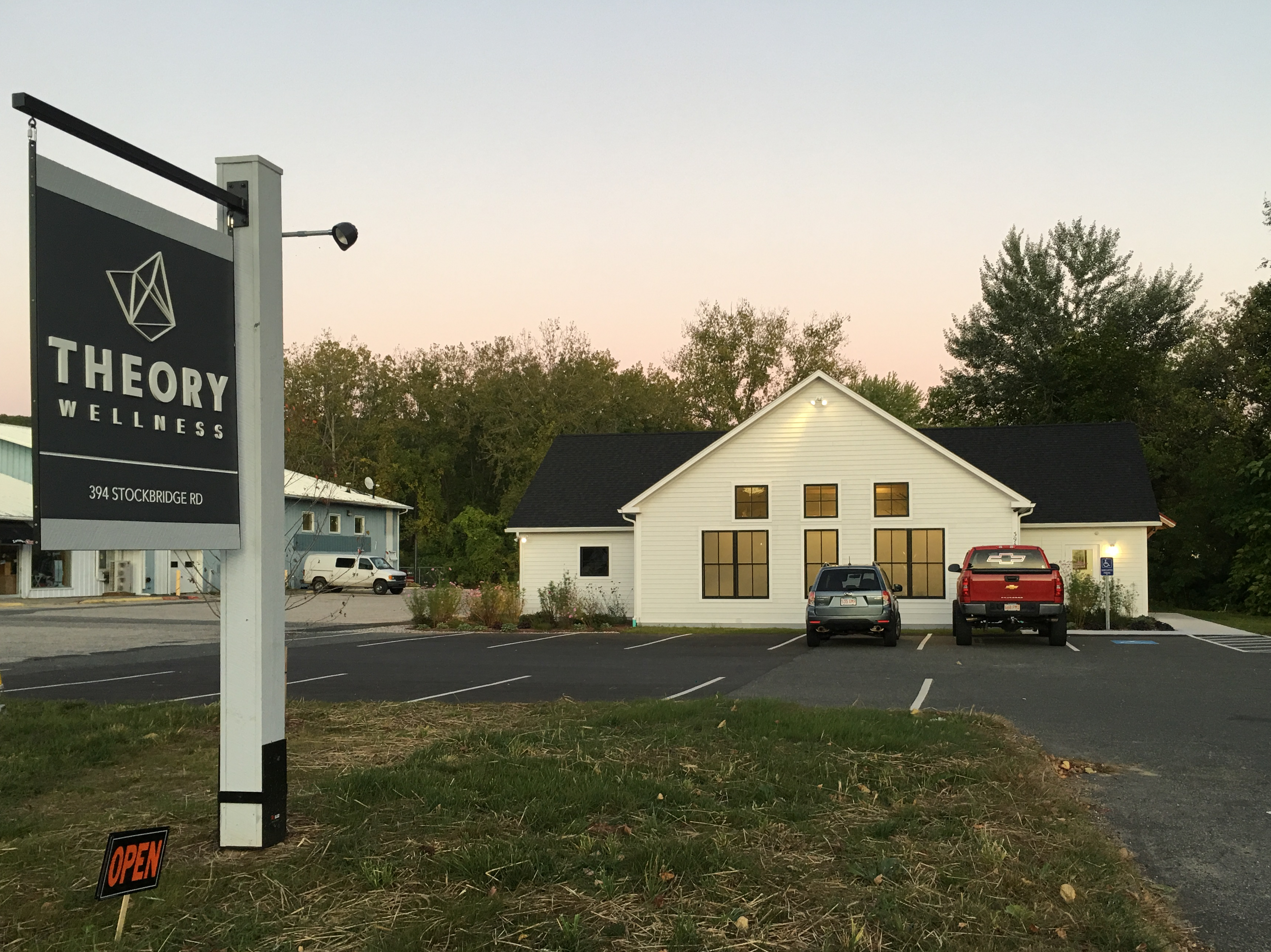 Great Barrington — “Controversy only shrinks on a daily basis,” according to Nick Friedman, president of Theory Wellness, Berkshire County’s first medical marijuana dispensary. The limited-access facility opened its doors – for lack of better terminology – under impeccably blue skies and with relatively little fanfare on Wednesday (September 27) after the final pieces of a year’s long process fell into place early in the week.

The opening of Theory Wellness is both poignant and convenient, offering county residents with patient cards access to medical marijuana without having to make the 120-mile round trip to Northampton which, prior to this week, was the closest option. Their goal, according to Friedman, is “to walk the line between a pharmacy and a retail facility” while making what he hopes will be, “a seamless transition in the community.”

A steady flow of customers made their way to 394 Stockbridge Rd. yesterday, most of whom knew the ropes. As Friedman and I chatted briefly on the lawn, two visitors were turned away: the first, a young man seeking employment, was not 21, the legal age required for admission to such facilities in Massachusetts; the second man, despite the November 2016 elections legalizing the use of recreational marijuana in Massachusetts, did not have a patient card. Due to strict Health Insurance Portability and Accountability Act of 1996 protecting the privacy of patients at Theory Wellness and the fact that I do not hold a medical marijuana card, Friedman offered to walk me through the process one might expect when visiting the dispensary.

Visitors arriving to the main entrance must first press a buzzer and then present a patient card that is both valid with the state and current with a physician, in addition to a valid form of government identification for the surveillance camera. After being buzzed into the reception area, these credentials are then entered into the system – effectively documenting the customer’s visit – as a means of tracking purchases that are subject to a 60-day maximum. Patients are then buzzed onto “the floor,” which, save for the sprawling black and white murals of both male and female cannabis plants on the walls, looks like any other typical business.

Friedman is quick to point out “the whole gamut of individuals from all walks of life” one might encounter in the dispensary on any given day. As a result, at the root of Theory Wellness is education – for the employees and the customers. All employees, known as “cannabis consultants,” go through a rigorous two-week training program that immerses them in the company’s program from seed to sale.

Theory Wellness, which opened another dispensary in Bridgewater in July, is a vertically integrated company: they grow all their own product under the supervision of a director of cultivation, and create all their own consumables  –both extracts and infusions – overseen by a director of extractions. Friedman described “the intensity of build-out [as] very robust” in reference to the 12,000-square-foot full indoor facility in Bridgewater where all the product available for purchase at Theory Wellness is grown.

The menu, both on their website and in person, is impressive. Many know what they want; in Friedman’s case, he ordered a single gram of Starflight Guava, described on the menu as being “the perfect choice for those seeking relief from chronic pain, PTSD, or anxiety.” For those less sure? Brandon Pollock, Friedman’s business partner who is also responsible for opening two of the four dispensaries currently operating in New Hampshire, was available for consultation.

Pollock, as are all the “cannabis consultants,” was poised to serve as a resource – guiding each patient toward treatment and then looping back, on subsequent visits, to use the patient’s feedback in going forward. The process, from start to finish, was professional and prompt. Black gloves were donned before flowers were selected from a glass apothecary jar; the flowers were then weighed, placed in a plastic container bearing the Theory Wellness logo (different iterations of which reflect the terpenes found in each of the four strains currently on the menu). The container was then sealed with a tamper-proof sticker and secured in a childproof bag, the process by which all products leave the facility. Best of all, Friedman completed his transaction, contrary to popular belief, with a debit card, the method by which roughly half of all transactions take place.

The entrepreneurial Friedman, in conjunction with Pollock, launched Blue Reserve Water, a sustainable drinking water company, when the two were students at Colby College in Maine. It was at this auspicious time that he encountered the incentive for his later work: An individual who “needed [medical marijuana] but [couldn’t] physically access it.” His father, Benno Friedman, of Sheffield, had suffered a broken neck seven years ago and was deemed a tetraplegic. The elder Friedman’s ensuing journey, one his son calls a “miraculous recovery,” still comes with a pain Benno Friedman describes as “kind of 24/7 these days.” That said, he speaks not out of shameless self-promotion for his son’s new business, but rather as an important voice in support of the use of medical marijuana, “given the fact that it’s legal now,” he clarified.

“We’re perhaps turning a corner here,” Benno Friedman said, citing the visible benefits of marijuana now being seen in what he calls, “a clean light.” He went on to elaborate:

“I would like to try and cut through the false information that has been thrown out there, and the danger that has been promoted associated with smoking marijuana, and at least describe that it’s quite possible for some reasonable person who is held in esteem by their comrades that using marijuana product does not condemn you to a long desperate road…it is, in fact, potentially so much more beneficial than having a shot of booze, which used to be the traditional medicine for pain.”

Friedman went on to describe the use of medical marijuana as “part of the arsenal – an important addition to the range of substances and therapies that someone in pain experiments with,” one which he has found to be of help in dealing with his own pain.

“We are living through an exciting time,” said the younger Friedman, who cites the satisfaction of helping individuals such as his father as the inspiration for Theory Wellness. In addition to his father, who was the dispensary’s first customer, Friedman reports that they served around 75 patients on Wednesday. “We were very pleased with the support and turnout we received on our opening day.” For more information, visit theorywellness.org.