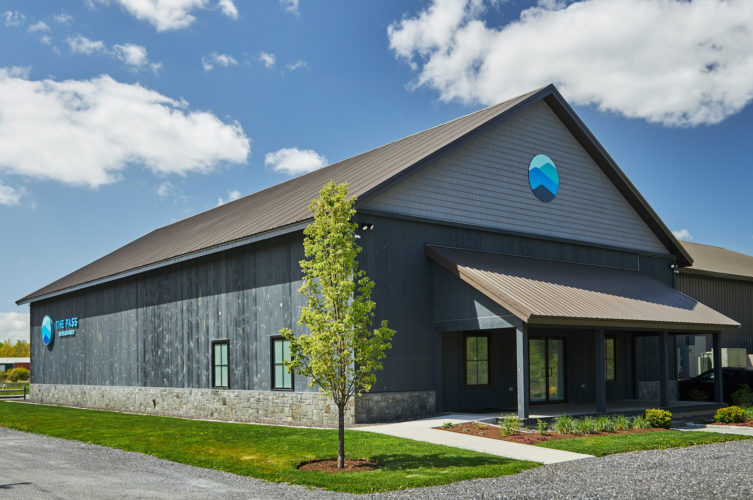 The Pass, a 'farm-to-label' cannabis store and grow facility in Sheffield, will finally open next week. Photo courtesy Berkshire Welco

Sheffield — Many retail cannabis businesses in the Berkshires (and beyond) pride themselves on the restorative benefits of their product, and so name themselves accordingly: Temescal Wellness; Silver Therapeutics; Theory Wellness.

A new cannabis store slated to open next week in Sheffield has a somewhat different approach: a full-service cannabis business that celebrates the Berkshires from start to finish.

Not only do its co-founders both live in Berkshire County, but their growing and processing facilities, and their retail store, reside here as well. For Michael Cohen and Chris Weld, the struggle to open the Pass has been a journey of some three years.

It started with an idea and, later, a community outreach meeting in Sheffield Town Hall with an audience that was half friendly and half suspicious. There were many hoops to jump through, especially with the state Cannabis Control Commission, which licenses all phases of the business in Massachusetts, but it’s all coming to a head Friday, July 17, when the store finally has its grand opening.

In a recent interview, Cohen said of the retail store on Route 7: “It’s representative of the Berkshires. It’s big and open and clean, with a ceiling height like a big lofty barn. It is so open and airy.”

The Pass will be branded and operated as “vertically integrated” rather than specialized, meaning the company will cultivate, process and sell its own product in addition to the products of several other select partners. In a playful variation of the Berkshires farm-to-table culinary culture, the Pass calls its operation “farm-to-label.”

The Pass has a 2,000-square-foot retail building, and behind it are two facilities: one for growing and another for processing. In addition, the Pass has a grow facility in Ashley Falls. Anyone who has not driven through that area north of downtown Sheffield in the last 10 years will be shocked at the difference.

The Pass was built on the former site of the old Shea’s Pine Tree Inn restaurant and bar, which closed about 20 years ago, was sold at auction in 2002, subsequently allowed to deteriorate and finally put out of its misery when it was demolished in 2015.

Cohen said the licensing process through the CCC took longer than expected because there are many details to be worked out. Licenses were issued late last year and in early 2020, before the pandemic hit and caused the inevitable delays. The facilities cannot open for business until final inspections are completed. That happened only recently. Click here to see the licensing history of Berkshire Welco LLC, which is doing business as the Pass.

Cohen is an experienced entrepreneur, having started an online advertising company, iBalls Internet Media, in the 1990s, and is currently the principal of Catch Interact, a marketing and early-stage tech investing company. Weld is best known as the founder of the popular Berkshire Mountain Distillers in Sheffield.

At the Pass, Cohen will focus on team-building and marketing while Weld, a former emergency-room physician’s assistant who himself lives on a farm in Sheffield, will concentrate on the cultivation and manufacturing process. It is surely a one-of-a-kind team, but perhaps the most interesting aspect of the business is its branding.

In its marketing and packaging — and inside the retail store — the Pass emphasizes soft pastel colors that set the tone for the experience. The name of the business itself is really a triple entendre.

“The Pass stands for our being given a pass to consume, that this is now legal,” Cohen said. “It also represents communal sharing” [as in “pass the joint”].

“Community is a really important part of cannabis in general. It really does bring people together. It also represents the mountain passes in which we live. Getting from one difficult place to another is also highly representative of cannabis.”

The orb on the logo contains the words “The Pass Berkshires” with a series of undulating lines designed to mimic the mountains of the region.

Cohen bristles at the Cheech-and-Chong stereotype of the lazy, couch-potato stoner beset with the munchies: “In some cases, I suppose that’s true, but the cannabis value-proposition provides the full range of experience from sleep and relaxation, to pain relief, to energy and inspiration.”

Cohen insisted he and Weld will do whatever they can — mostly through the rigorous security regimen mandated by the CCC — to prevent the product from falling into the wrong hands: “Youth consumption is an issue for us.”

At the community outreach meeting in Sheffield in March 2018, Weld pointed to statistics that show that teen use of marijuana has actually decreased in Colorado, where adult recreational use was legalized in 2013 and sales began the following year. However, that assertion was rated half-true by Politifact.

“Driving while impaired is an issue as well,” Cohen added. “Education is a very important part of the process.”

As an extension of the Berkshire-centric theme, Cohen and Weld have added a section to the Pass’ website called the Berkshire High Guide, an extensive collection of their favorite places to visit, shop, stay and dine in the Berkshires. Seventeen towns are also affectionately profiled.

Click here for information on the July 17 opening. Online pre-ordering is encouraged. Masks and identification are a must. Berkshires-themed attire is optional.