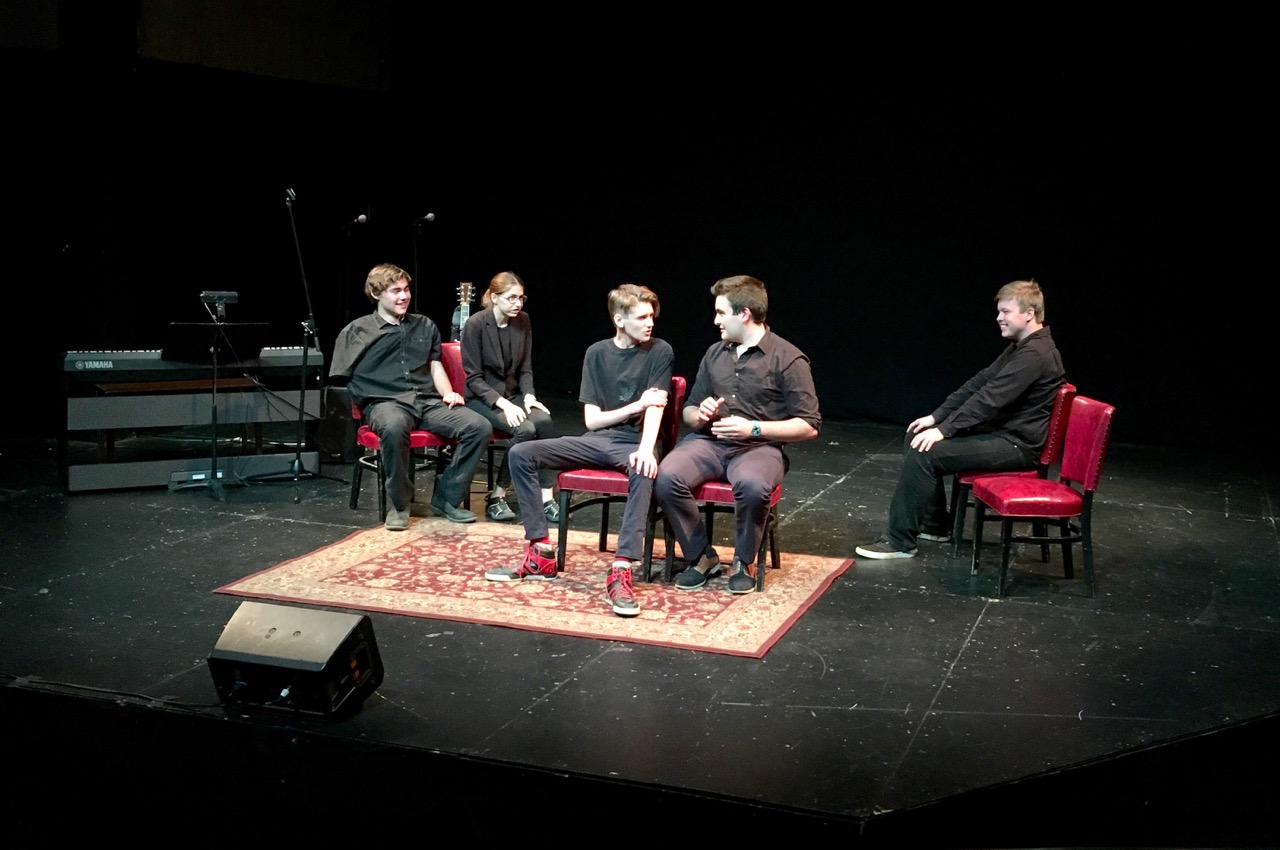 Stockbridge — The Berkshires seem to have an uncanny number of children with artistic talent, and that creative energy was on full display Wednesday night (May 10) at the Berkshire Theater Group’s first ever High School Student Cabaret, which organizers hope to be an annual event.

Three “veterans” of the stage organized the entire fundraiser: Emma Foley of Taconic High School, Hanna Koczela of Hoosac Valley High School, and an exuberant pixie of a performer named Julianna Salinovici, a fifth-grader at Crosby Elementary School. The youth of the organizers was clear when they introduced the cabaret and asked the audience to please turn off cell phones and pagers, quickly confessing that they had no idea what a pager actually was.

Highlights of the evening included a 5-person improv group, made up of four Waldorf High School students and a colleague-in-comedy from Lenox High School. Two particularly energetic members of the group, Toby Keenan and Evan Silverstein later performed an improv rap song based on the audience suggestion of “bananas.”

Another Waldorf student, Dmitri Koufis, brought the house down with his edgy standup routine. Among his riffs:

Another highlight was a comedic one act about dating, directed by Charles Kerzner, who also sang later in the evening.

One of the biggest surprises of the evening was a crystalline operatic performance by Lily Lothrop, who sang a robust rendition of the aria “Porgi Amor” from the Marriage of Figaro. Lothrop will be attending Smith College next year, with a focus on voice studies.

When little Julianna had her moment to sing in the spotlight, she confessed what many in the audience were thinking: “Why is there an elementary school kid in a high school cabaret? Well, this isn’t what I signed up for!” She went on to sweetly perform “How Far I’ll Go” from Moana.

The idea for the cabaret came from the organizers’ desire to showcase local talent and to support an organization that has nurtured their performance talents for many years.

“Emma and I have been involved together with the Berkshire Theater Group for close to ten years,” explained Hanna Koczela. “I’ve done community theater in the summer with them, performed in the Christmas Carol, and even played Macduff’s son and an apparition in Macbeth at the age of nine.

“We’ve been performing together for fun on the weekends forever, going to each other’s houses with instruments. So we thought, ‘let’s put this on stage!’ And it’s great to give back to an organization that has given us so much.” The Unicorn Theater was chosen as the venue, she said, because of its sense of intimacy.

Emma Foley said she was particularly grateful for all the help that director Travis Daly, who teaches in BTG’s education program, provided in helping make the night happen. “I’ve always wanted to do something like this, and Travis supported us the whole way.” Foley said. “He’s done so much for us, provided us with so many opportunities.” Foley, who began acting with BTG as a nine-year-old in a production of Annie, said she expects to study drama in college.

One of the biggest challenges behind organizing such an event was communicating with her fellow students. “Emailing teens is hard,” Foley explained, “because they don’t read their emails.”

There was just one rehearsal two nights before the performance, but that didn’t seem to bother the performers one bit. “I didn’t quite know what I was getting into,” said Noah Meyerowitz, a Waldorf student who participated in the improv segment. “But it was so much fun. Anytime I get the chance to get on stage and riff like that, I have a blast. I just love doing it.”

BTG will held another fundraiser for its educational program Friday (May 12), when “Encore! An Evening to Celebrate High School Musicals” will be presented at the Colonial Theater. High schools from around the county performed snippets of their spring musicals.