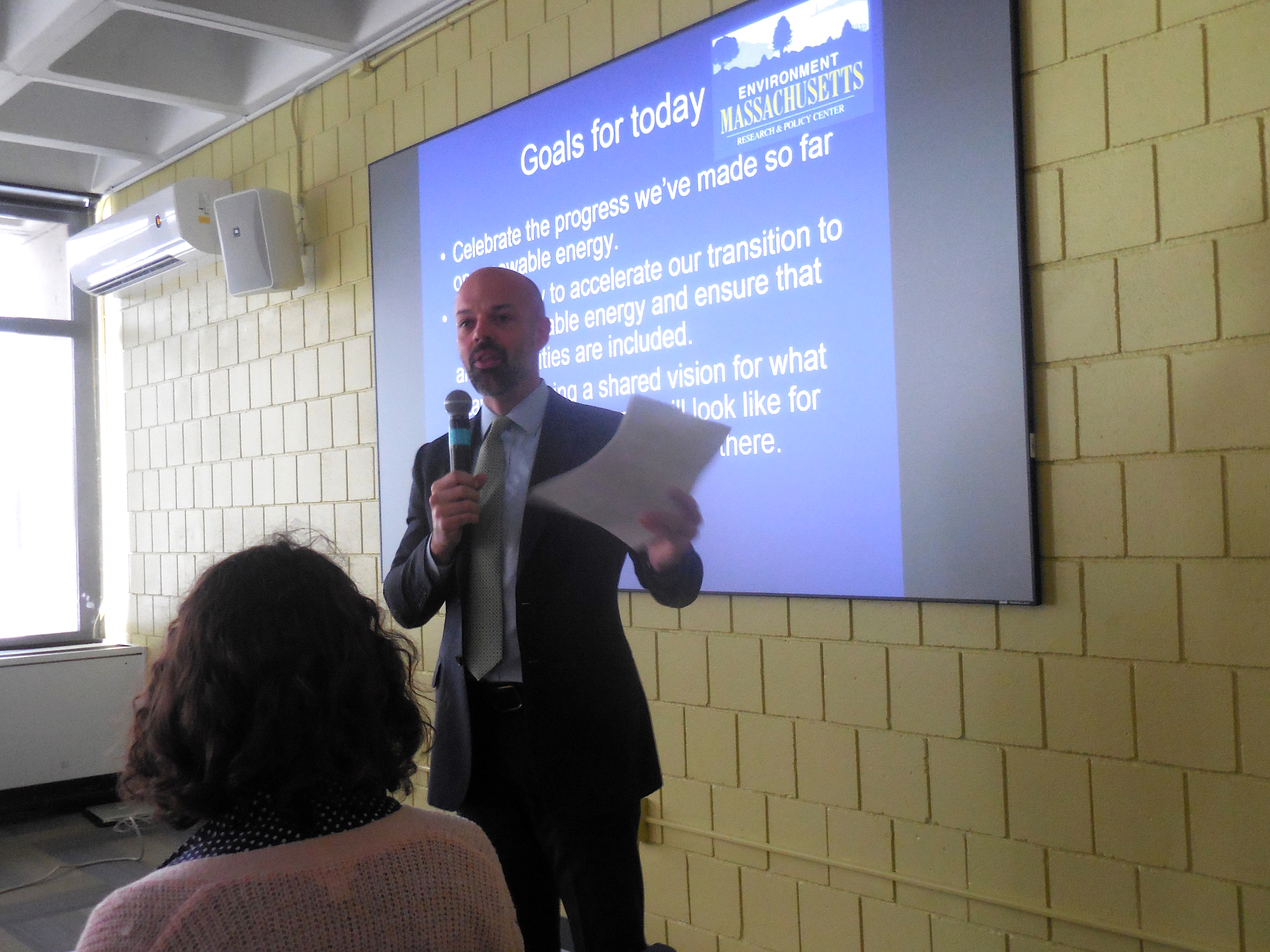 Pittsfield — State and local officials, business leaders and environmental advocates gathered at Berkshire Community College on Monday to discuss steps to transition to 100 percent renewable energy. The Berkshires 100 Percent Renewable Energy Summit is part of a collaborative statewide conversation focusing on achieving a swift, just and complete transition from fossil fuels to clean energy. According to Meghan Hassett, campaign organizer for Environment Massachusetts, this was the fifth 100 percent renewable summit held in communities across the state since last fall.

Having this conversation at the community level is essential to the strategy of overcoming the federal government’s inaction and hostility towards addressing climate change. “There’s a real sense of urgency, but also frustration on these issues,” said State Sen. Adam Hinds during his opening remarks at the summit. “We see the choices being made at the national level, and that just elevates the importance of what you’re doing [at the local and state level].”

Pittsfield Mayor Linda Tyer echoed this sentiment. “It’s right here where we are, in our cities and states, where we can make the most difference.”

Tyer explained how Pittsfield is forging ahead with renewable energy, particularly solar. Last spring, the city completed the conversion of a landfill into a 2.9-megawatt solar array, which is projected to save $140,000 annually in energy costs. Another solar array was installed on the city’s wastewater treatment plant. Additionally, a solar array proposal is in the works for the Pittsfield airport. Pittsfield was also recently awarded a $75,000 grant for a feasibility study on community microgrids.

“We are proud of our track record in developing renewable energy generation facilities in our city, and we look forward to assessing the feasibility of a local microgrid system that will improve our resiliency as a city,” said Tyer.

Other speakers talked about energy efficiency programs like MassSave, clean transportation initiatives, and renewable heating and cooling. Great Barrington is participating in the pilot round of the HeatSmart Mass program, modeled after the successful Solarize Mass initiative. HeatSmart uses the same community outreach and group purchasing model as Solarize but for clean heating/cooling technologies. Great Barrington has chosen to work with air-source heat pumps, which are highly efficient but relatively expensive. A key part the Great Barrington HeatSmart team’s focus is bridging the funding gap to enable low-income homeowners to participate. “Great Barrington is very committed to the environmental justice aspect of this in terms of making sure low-income residents have access,” said Judy Eddy, marketing consultant for HeatSmart GB. Eddy explains the HeatSmart initiative in the video below:

Regionally, western Massachusetts is making considerable progress in advancing clean energy. Amherst and Northampton have made commitments to achieve 100 percent renewable energy. Over three dozen towns are designated Green Communities, which means they receive state grants to fund municipal energy efficiency and renewable energy projects. And two of the region’s ski resorts, Jiminy Peak and Berkshire East, are both powered by 100 percent clean energy from solar and wind.

Berkshire East Director of Communications Bill Farrell addressed the summit, telling the story of why the mountain resort opted for renewable power. The bottom line is that it made sense for their bottom line. Facing prohibitive power costs, the Schaefer family that owns the resort made a commitment to switch to wind and solar energy in order for the business to survive. Berkshire East put in a 900 kW wind turbine in 2010, and the next year added a 500 kW solar field. It is now the only ski area in the world that generates 100 percent of its electricity from onsite renewable energy.

The summit also addressed the imperative for ambitious policy at the state level to accelerate the transition to a clean energy economy. According to Ben Hellerstein, state director for Environment Massachusetts, one of the main challenges is to move beyond the incremental approach to policymaking. The goal, he said, is for the state to make a commitment to achieve 100 percent renewable energy economy-wide by 2050.

“Massachusetts has come a long way, but we cannot rest on our laurels. There is so much at stake, but we also have so much to gain from going 100 percent renewable,” said Meghan Hassett, campaign organizer with Environment Massachusetts.

“Events like this showcase all the momentum we have at the local level,” she added. “Hearing from all the business and community leaders here it’s clear we can accelerate the progress we’ve already made to get to 100 percent renewable energy.”