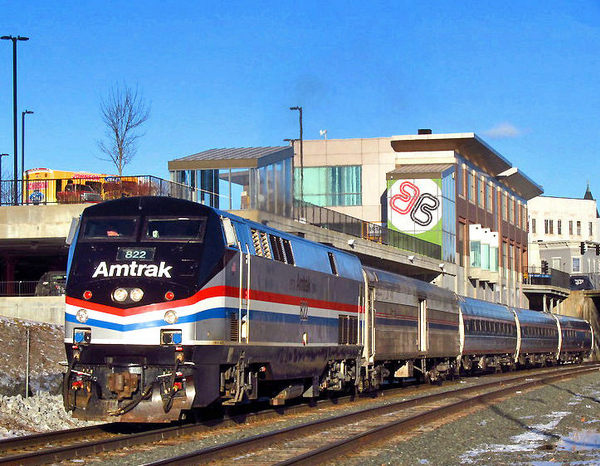 Amtrak's daily Lake Shore Limited between Boston and Chicago stops at the Joseph Scelsi Intermodal Transportation Center in Pittsfield, Massachusetts. It is currently the only interstate passenger rail service in the Berkshires.

Berkshire County — The Berkshire County delegation to the State House in Boston has signed a letter to Gov. Charlie Baker objecting to an executive order he issued creating a special commission on the future of transportation in the state. Among other complaints, the letter writers say the residents of Berkshire County “were not given an adequate degree of representation” on the commission.

The letter is reprinted below.

In a brief conversation with The Edge, Sen. Adam Hinds, who was among those who signed the letter, said he is happy that Baker is devoting badly needed attention to the issue of transportation, but is “deeply disappointed that the Berkshires were not given a high enough priority to have a member on the commission.”

“We have a number of projects locally including the New York-to-Berkshires rail, and internal countywide transportation aimed at improving rural transportation and we need to be a part of the statewide conversation,” Hinds said.

Almost 9 percent of the county’s bridges are deemed structurally deficient and the Berkshire Regional Transit Authority is chronically underfunded. As Hinds noted in his comments to The Edge, he also chairs a working group studying the feasibility of “establishing direct seasonal weekend passenger rail service” between New York and Pittsfield between the Memorial Day and Columbus Day weekends.

“So we are making this a priority to work with the governor to improve representation from the area,” Hinds added.

And Berkshire County isn’t the only important county without representation on the transportation commission. Barnstable County, which includes all of Cape Cod, has no members, either.

State Rep. William “Smitty” Pignatelli tweeted that Baker is to be commended for establishing what Pignatelli called a “#BlueRibbon” commission, “but you’ve made an egregious mistake by NOT having any representation from the #Berkshires.”

Steven Kadish, Baker’s former chief of staff, will chair the commission. According to the governor’s office, the commissioners, who will not be paid for their service on the panel, will include:

The letter from the Berkshire delegation is below.

Re: Commission on the Future of Transportation in the Commonwealth

We write to express our concerns regarding the recently appointed Commission on the Future of Transportation in the Commonwealth. While we understand and respect the Commission’s goals of recognizing advancements in transportation and preparing Massachusetts to address these changes as they manifest, we cannot agree completely on a Commission created to address tomorrow’s transportation needs while our districts are facing a virtual lack of viable public transportation options today.

As you are aware, a portion of the Massachusetts sales tax exclusively funds the MBTA, which is a benefit our constituents do not experience back home. The Berkshire Regional Transit Authority (BRTA) struggles to meet the needs of a region that is increasing in age and poverty while declining steadily in population as it remains difficult for individuals to access services and get to work. In February 2017 alone, the BRTA Advisory Board voted to end two Routes altogether due to a loss of dedicated funding. Transportation has always been a serious issue in the Berkshires, and we would hope that at this point our needs would be further recognized before we began addressing the needs the more heavily urbanized regions of the Commonwealth may face in the future.

Again, we understand the premises of the Commission and agree that it is important to address these as we step into the future. However we cannot support these endeavors wholeheartedly knowing that our districts, which continue to suffer from a serious lack of transportation infrastructure even in the year 2018, were not given an adequate degree of representation. Thank you in advance for your time and consideration of our letter. Please do not hesitate to contact any of our offices for additional information.