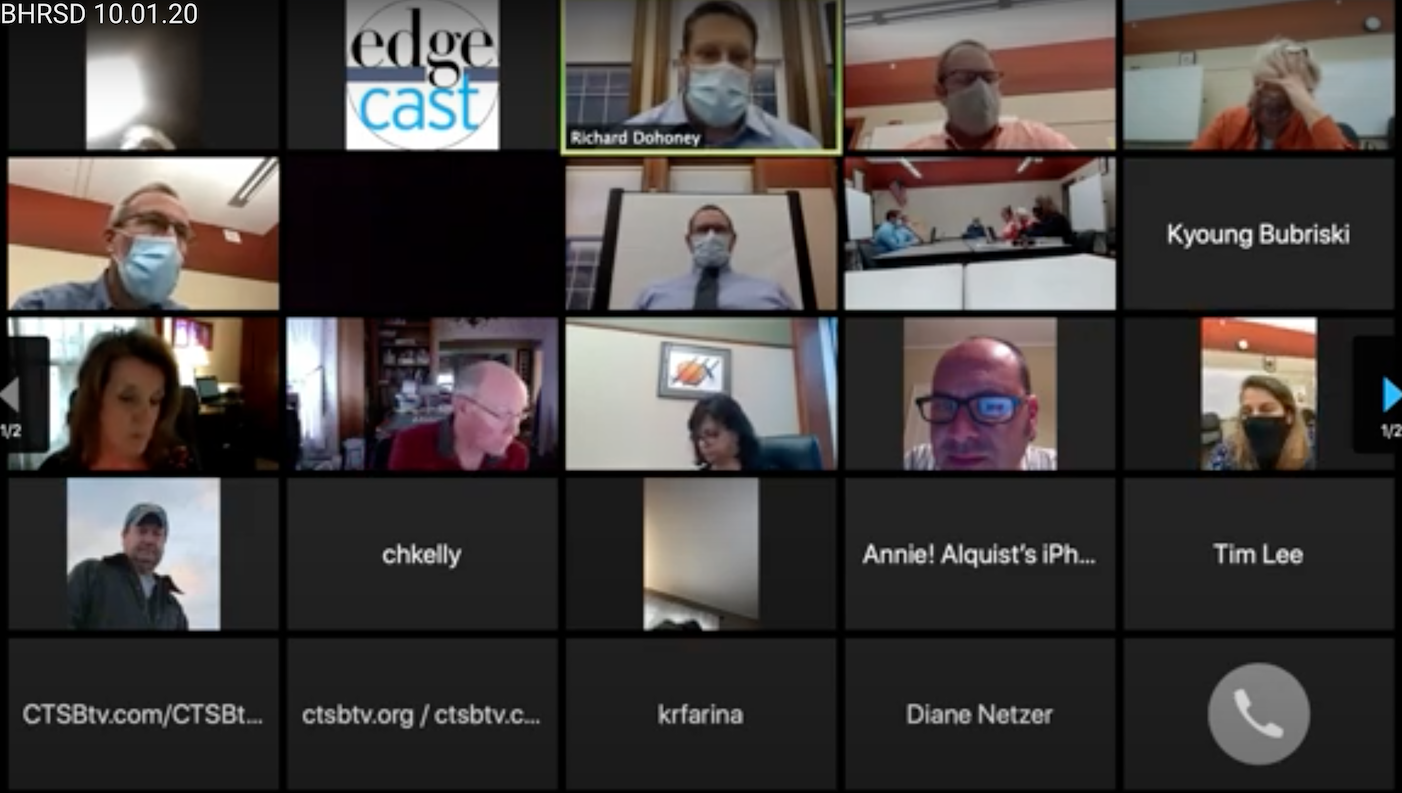 Great Barrington — As the Berkshire Hills Regional School District transitions from remote-only learning to a so-called hybrid model on Monday, school officials have tried to address the concerns of some parents who are concerned about how effective the district’s soon-to-be-implemented model will be.

Some of those worries were expressed at last week’s school committee meeting in which Du Bois Regional Middle School Principal Ben Doren was questioned sharply by school committee members and parents who felt his hybrid model lacked specificity and was too unstructured to be effective.

In the ensuing days, Doren worked with Superintendent Peter Dillon and others to revise and improve his plan, which was approved unanimously at Thursday night’s meeting. Click here to read it. Doren said he also benefitted from a forum Wednesday night that included parents and families.

See video below of a presentation of Du Bois Middle School Principal Ben Doren’s revised hybrid learning plan. Fast forward to 5:30. Then fast forward to 25:30 to see a continuation of that discussion with parents and school committee members:

“Students will learn in-person at their schools two days a week and participate in distance learning three days a week,” the plan says. “All learning experiences will include a mix of in-person sessions, live virtual small-group meetings and self-paced learning. Teachers will provide lessons to meet the standards of each grade level.”

The plan also includes a component called “Crew,” which Dillon later described to The Edge as “essentially an advisory program where students and teachers set goals, check in on them, and work on social emotional learning.”

“We see it as an important foundational opportunity to support students’ growth as people and learners,” Dillon explained.

In August, the school committee decided that until Monday, Oct. 5, the school district would operate with a remote-only model beginning Sept. 14 and out of an abundance of caution in the face of the COVID-19 pandemic.

At that time, the district will transition to a “hybrid model,” in which half the student population will be engaged in face-to-face learning on campus with teachers and staff on Mondays and Tuesdays, with the other half reporting for the same on Thursdays and Fridays. No students will be present on Wednesdays, when the custodial staff will perform a deep cleaning of the buildings. The date for a transition to full in-person learning has not been set.

For his part, Doren said his presentation provided a visual of what hybrid will look like and what it might look like if it remained the modality for more than a few weeks and “what we would do in the long run if we felt it wasn’t working.”

“We’re trying to maximize face-to-face time in this model as well trying to minimize the total amount of screentime that a child is on,” Doren said. “Six hours, four to five days a week is not healthy.”

Most educators have found that, for obvious reasons, traditional face-to-face learning is the least challenging modality for educators. All-remote presents some technological challenges but is relatively straightforward. The hybrid model, with its mix of the two modalities on differing days of the week, confronts educators with tremendous challenges.

“If we had to move back to remote learning, we would also then start to have a more regular schedule across the grades,” Doren explained.

School committee member Rich Dohoney of Great Barrington, who had been one of the sharpest critics of Doren’s plan last week, thanked the principal for his willingness to explain what hybrid would look like if it became “a long-term thing, which I hope it does not.”

Prior to 2005, when Berkshire Hills consolidated its three towns’ elementary and middle schools into a single campus on Monument Valley Road in Great Barrington, the district’s middle schools were mostly for grades seven and eight only. But Du Bois Middle School houses grades five through eight.

“I was totally skeptical but have been totally won over,” Dohoney said. “I think it’s a great model.”

That said, Dohoney wondered aloud how students in the two lower grades could be taught in a hybrid modality in the same way as seventh- and eighth-graders.

“If we evolve through this, we may have to tailor it for those grades,” Dohoney said.

After his plan was approved unanimously, Doren told the committee, “I regret any miscommunication or misrepresentation and I am looking forward to being clearer in the future, so thank you.”

A few parents spoke out as well. They all praised the hard work that administrators, faculty and staff have put into dealing with the virus but were skeptical of some of the details.

Sherry L. DeCelle is a financial adviser who lives in Tolland but works in Great Barrington. She choices her three children, one of whom is in the middle school, into Berkshire Hills.

DeCelle attended this week’s family forum with Doren and asked him how far behind the students had fallen given the fact that so much ground has been lost since Berkshire Hills went to an all-remote model in mid-March. Doren said he figured about three months, though DeCelle said she thought the number was closer to five months.

DeCelle also lamented the fact that the middle school hybrid model was heavy on Crew, and that outdoor learning was limited because of poor Wi-Fi reception outside the school buildings.

Moreover, however, she wanted to know what kinds of metrics the district was relying on to determine which learning modality to deploy.

“If numbers are so low, if not now, then when?” DeCelle asked, referring to a return to full in-person learning. “How many weeks and months can go by where we’re not attempting to be in school full-time, which is obviously the ideal scenario and we can be as normal as possible?”

School committee Chairman Steve Bannon explained that the district expected to make an announcement soon: “I agree with you that we should, as quickly and safely as we can, go in-person and so hopefully we will announce that next week.”

Dillon further explained that one of the reasons the district has deployed the hybrid model is to demonstrate that it can be done “safely” in advance of stepping back into full in-person learning.

Steve and Stacey Schultz, who have children in both Du Bois and Monument Mountain Regional High School, echoed many of DeCelle’s concerns, and wondered how, with such low COVID-19 infection numbers in Great Barrington, Stockbridge and West Stockbridge, the schools had not reopened full in-person, which would be far better educationally.

“How do you learn a foreign language if you only speak it two days a week?” Stacey Schultz asked rhetorically. “You need to have that repetition.”

Dillon explained that the metrics are complicated by the fact that so many of the students come from other communities through the state’s public school choice program. Furthermore, many faculty and staff live in municipalities such as Pittsfield, which has the highest infection rate in Berkshire County.

Berkshire Hills administrators look at the latest statistics from the state Department of Public Health, which publishes a weekly color-coded map late on Wednesdays. Click here to see the latest infection map.

“Our staff come from 39 different communities,” Dillon said. “If Pittsfield turns red, that might impact us because a number of students, families and staff come from Pittsfield. So that’s where it gets a little more complicated.”

Monument Principal Kristi Farina sympathized with parents’ concerns but pleaded for more patience: “This is a huge lift. I would like to ask for some patience from the community with regard to the work our staff is trying to do. It’s hard for everyone.”

At that point in the Zoom meeting, a technical problem caused the personal screens of the participants to disappear one by one until only a few were left, leaving the remaining participants to wonder what had happened. After a few minutes, Berkshire Hills business administrator Sharon Harrison came back on to say that the meeting has been adjourned.