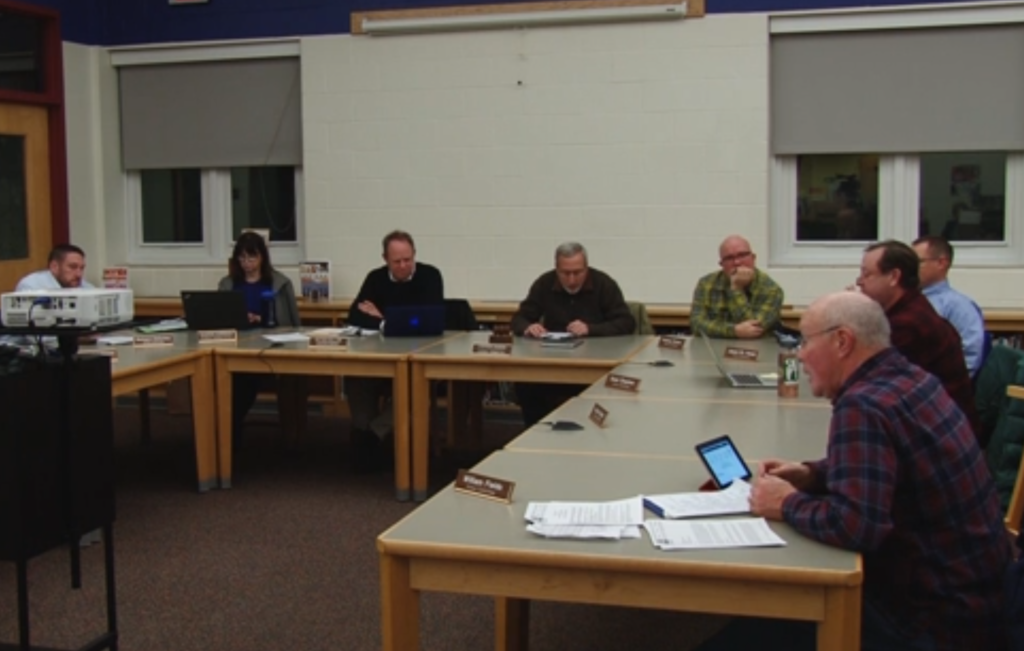 Courtesy Community Television of the Southern Berkshires
During a meeting of the Berkshire Hills Regional School Committee Bill Fields of Great Barrington, at far right, described the Massachusetts School Building Authority as "an authority clouded in secrecy."

Great Barrington — If it was ever in doubt, it’s now a certainty: Officials at the Berkshire Hills Regional School District appear exhausted and frustrated by the process of trying to get funding and approval for a new Monument Mountain Regional High School.

For the second time in the span of a year, Berkshire Hills has been turned down by the Massachusetts School Building Authority in the school committee’s quest for state funding for a new Monument. The question now is where to go from here. 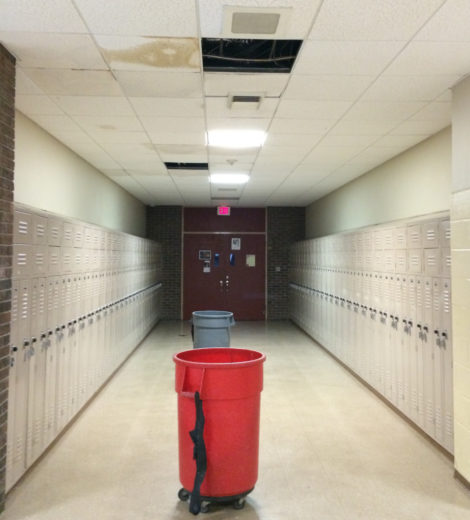 In a Monument Mountain Regional High School hallway, barrels caught rain water leaking from the ceiling before the roof was fixed a few years ago. Photo: Ben Bellow

In a Dec. 11 letter, MSBA CEO James MacDonald told Berkshire Hills superintendent Peter Dillon: “Based upon the MSBA’s review and due diligence process, it has been determined that the Monument Mountain Regional High School’s SOI will not be invited into the MSBA’s Eligibility Period at this time.”

As is its general practice, the MSBA did not say why it would not fund construction this time around. Nor did it in December 2018 when the district received a letter that said much the same thing.

There were the usual platitudes about how competitive the grant program was. In the most recent cycle, for example, the MSBA received 61 statements of interest (SOI) from 51 different school districts for funding in 2019. Eleven received funding. During the entire 2019 cycle, MSBA received 144 SOIs. Click here to view a 2019 summary provided by the authority. As it always does, the MSBA invited the rejected districts to submit SOIs again this year.

Among other factors, the MSBA “identifies the school facilities that have the greatest and most urgent need based on an assessment” of the SOIs that are received in a given year.

“That’s frustrating because we’ve done a ton of work on this both as a [school] committee and as the Next Steps subcommittee,” Dillon said, referring to a panel formed two years ago to recommend a course of action for fixing the aging high school.

Dillon told the school committee at its Jan. 9 meeting that he has reached out to the MSBA and that he has been told “it’s been a very competitive year.” Dillon said he would try to get additional clarification on what the district could do to become more competitive in the next round.

Click here to see the video of the meeting courtesy Community Television of the Southern Berkshires. Fast forward to 1:37:40 to watch the discussion of the MSBA rejection letter.

This will be the third try since 2013 to get state aid for the aging high school. Within the span of one year, a pair of $50 million-plus proposals failed when Great Barrington, by far the largest of the three towns in the district, failed to approve an override to Proposition 2½, a state statute that limits tax levy increases. In both cases, the state would have paid for almost 41 percent of the cost, not counting incentives. 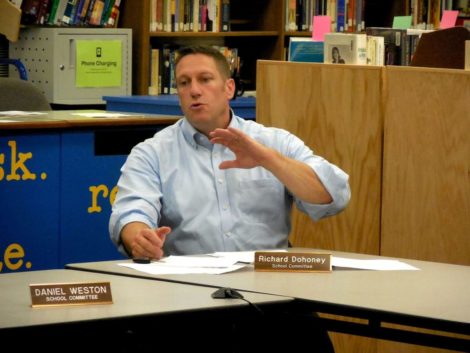 There was some discussion of whether to continue to seek funding from the state or to essentially go it alone and try to convince taxpayers that jumping through hoops to get state aid isn’t worth the effort, especially if staying in line for state aid would mean students and staff would be waiting five years or more for construction to begin.

Ultimately, the school committee essentially decided to do both at once, pursuing so-called “parallel paths” for a potential new high school. More about that in a minute.

Before making that decision, the school committee engaged in a lengthy discussion on the MSBA, the quasi-independent public state authority that provides grants which partially fund municipal and regional school districts for K-12 school construction and renovation projects.

“I’m really frustrated by this,” Fields said. “Where was the meeting, where … was their recommendation with documentation and minutes of how they discussed our application?”

Characterizing the MSBA as an “authority that’s clouded in secrecy,” Fields asked, “How does this authority operate and do they operate outside of the open meeting law?”

“I don’t know if their process has an obligation to be public,” Dillon said.

It’s not clear to what extent the MSBA must comply with the state’s open meeting laws and whether the authority must make minutes of its selection process available to the public. In many states, quasi-public agencies enjoy certain exemptions from state laws governing transparency. Officials from the MSBA and the state Attorney General’s office could not be reached over the weekend for comment.

On its website, the MSBA does have a page dedicated to public records requests but does not say which, if any, of its information is exempt from laws governing open meetings and public document requests.

“If you’re going to fight this monster state bureaucracy, you’re doing it at the expense of our students,” Great Barrington school committee representative Rich Dohoney told Fields. “That’s not where we need to be directing our energy right now. We’ve got to solve our own problems.”

“I don’t know that they legally need to release that,” Bannon told Fields. “Peter will contact them … We are not going to get it next year if we go after them in the press and call them a corrupt agency. I’m pretty positive of that.”

Meanwhile, Dohoney made a motion, which was approved unanimously, to have the district’s finance and building subcommittees start discussions to have debt exclusion items on the warrants for the May town meetings in Great Barrington, Stockbridge and West Stockbridge — the three members towns in the district.

A successful debt exclusion vote would effectively remove debt service for the project from the constraints of Proposition 2½. Click here and scroll to page 2 for an explainer from the state Department of Revenue. If the district opted to pursue the construction of a new high school without financial assistance from the MSBA, a vote from all three towns to override Proposition 2½ would almost certainly be needed.

“In my mind, we’ve exhausted our efforts with the MSBA because of the timing issues and that trumps the financial issues,” Dohoney said. “If we have to wait another year to see if this gets approved [by MSBA] to go into what the administration tells us is a three-to-four-year project…”.

“That’s untenable; we are not doing justice by our current students,” Dohoney added. “We’re being irresponsible by sitting here today and saying we’re not improving our high school for four years.”

The aging Monument opened in 1968 at a cost of about $3 million, the equivalent of more than $22 million today. In 1967, when the school was built, the MSBA had not yet been formed and there were no major sources of state funding for school building projects, so the $3 million spent on the new Monument was all local dollars paid for by taxpayers in the three member towns.

Looming in the background are serious talks with the Southern Berkshire Regional School District about a possible merger. Stay tuned.

— Victor Hugo
Read next: LAURA DIDYK: It Takes All Kinds