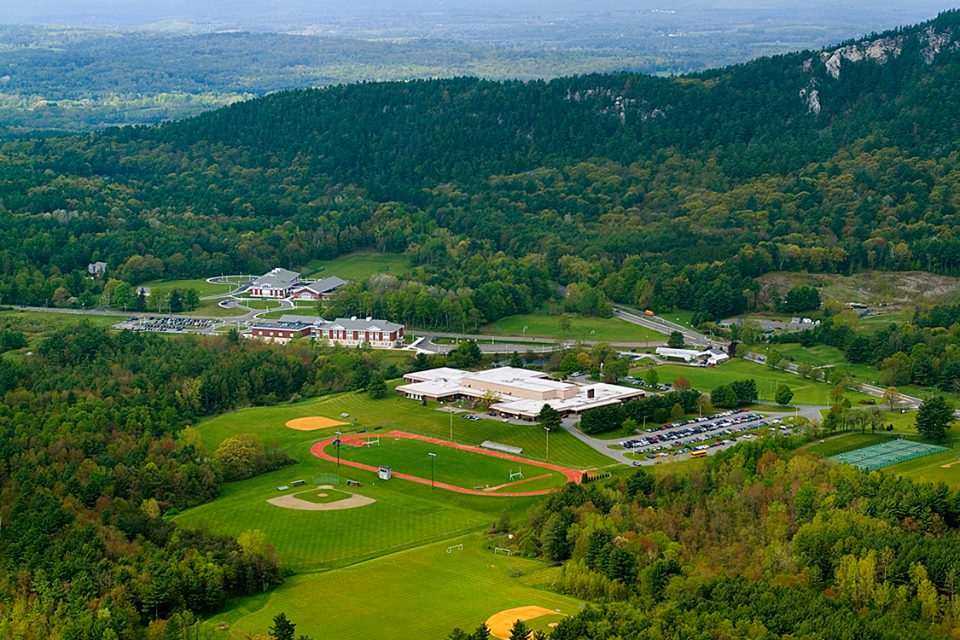 An aerial view of the campus of schools comprising the Berkshire Hills Regional School District.

Great Barrington — The quest to rebuild Monument Mountain Regional High School got a shot in the arm last week as the Berkshire Hills Regional School Committee voted to form a new advisory panel to explore options.

At the same time, at its Nov. 2 meeting, the committee voted almost unanimously to pursue a parallel track by submitting a statement of interest to the Massachusetts School Building Authority, a state department that funds school construction projects across Massachusetts.

So it’s clear that there is a consensus on the school committee to fix what ails the nearly 50-year-old high school – whose roof leaks in heavy rains and whose science labs are antiquated at best – though there were some concerns about the size of the panel.

The new panel, dubbed Monument Next Steps, will include 22 members and will be modeled after the Regional Agreement Amendment Committee (RAAC), which met several times over the course of the last year in a successful effort to change the district agreement’s formula for taxing the district’s three member towns to pay for its operations and capital expenses.

Superintendent Peter Dillon had prepared a draft charge for the new panel along with a proposal for how Monument Next Steps would be populated.

“RAAC had a high level of success,” Dillon explained. “I think the size gives us the potential for a diversity of opinion.”

RAAC had 19 members: school committee members (two from Great Barrington and one each from Stockbridge and West Stockbridge), one member of the finance committee and of the board of selectmen from each town, and three citizens at-large from each town.

Dillon made a suggestion, which was ultimately accepted, that faculty and student representatives be added along with an at-large member with an expertise in construction or architecture.

But school committee member Bill Fields, also from Great Barrington, was afraid too many specialists would limit community input. He suggested outside help might be necessary.

“The RAAC had two state consultants to help us with some of the technical stuff we weren’t familiar with,” said Fields.

Fields also objected to the use of the term “renovation” to describe what was being proposed for the high school, though the word did not appear in Dillon’s document.

“We have to get away from ‘renovate,’” Fields explained. “It has bad vibes and it has a history.”

Weighing heavily on the minds of the school committee were two recent attempts, one in 2013 and another a year later, to spend more than $50 million to rebuild the high school.

Both failed when Great Barrington, by far the largest of the three towns in the district, failed to approve an override to Proposition 2½, a state statute that limits tax levy increases. Both attempts were marketed as attempts to “Renovate Monument” on the same footprint despite price tags that more resembled a new school.

School committee Chairman Bannon has said, “Nothing should be off the table.” Possibilities include overhauling the school on its original footprint, an entirely new high school on a different location on the Route 7 property, or funding by the three member towns with no help from the MSBA.

Some school committee members have said in the past that they were concerned the MSBA would be less inclined to view a Berkshire Hills project favorably because two previous MSBA projects failed in district-wide votes within a year of each other. In addition, it can take years to get MSBA funding approval from the receipt of a statement of interest to the date of approval.

Dillon’s proposed mission for the advisory panel, which is “to gather information to support the School Committee in making decisions about how to proceed with addressing the physical plant needs of the high school,” was satisfactory to most of the school committee, though Sean Stephen of Stockbridge felt most of the work had already been done in the previous two failed attempts.

“We don’t want to repeat ourselves,” Stephen said.

At the previous school committee meeting, member Anne Hutchinson of Great Barrington saw a possible fly in the ointment. Both the Berkshire Hills and Southern Berkshire regional school committees recently announced their intention to explore a merger with each other.

In addition, after walking away from the Berkshire County Education Task Force in September, the Berkshire Hills Regional School Committee indicated it also wanted to initiate discussions with the Lee Public Schools about a possible merger.

Some in the community have postulated that the current movement to rebuild Monument is rooted in a sort of “build-it-and-they-will-come” mentality. In other words, if Berkshire Hills builds a new high school, it would be ideally situated to be the central campus of a new merged district with Lee and Southern Berkshire.

In a follow-up interview, Bannon said the concepts of a possible merger with neighboring districts and the current impetus to address Monument’s shortcomings are “completely separate.”

“We know we have to do something to Monument,” Bannon told the Edge. “We have waited long enough. Plus, we haven’t even started talking with the other districts yet.”

Bannon said the school committee will appoint its own members to sit on Monument Next Steps. The towns will appoint their own representatives from their own selectboards and finance committees and the district will advertise for applicants to fill the nine citizens-at-large slots. Bannon said he would write letters indicating just that to the town managers and town administrators of the three towns in the district: Great Barrington, Stockbridge and West Stockbridge.

The school committee recommends that Monument Next Steps comes up with a recommendation within one year.

“A year is aggressive, but I think it’s a reasonable amount of time,” Bannon said. They’ll probably meet once a month like RAAC.”