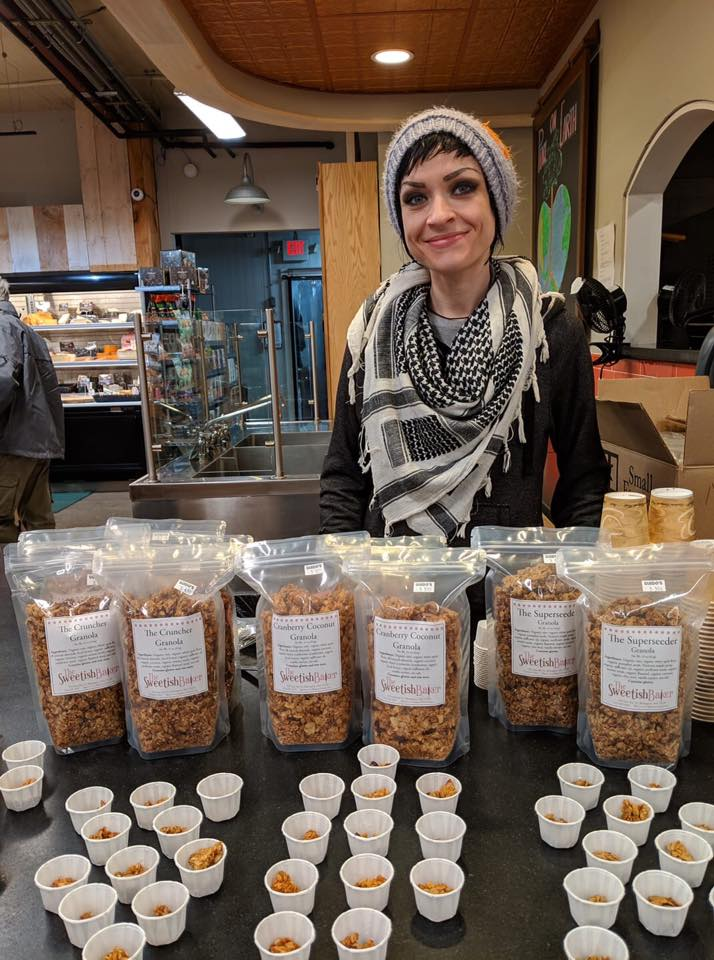 Great Barrington — Catching up with Hanna Jensen, on the Thursday before Easter and Passover are observed, requires a bit of orchestration. Jensen, known to locals as the Sweetish Baker, is deep in the throes of her passion: baking. “I get up at 4 a.m. every day,” she said. That is her average getting up time “depending on how much I have to do.” By the time we spoke by phone at 11:15 a.m., she was putting the finishing touches on a special order for the Berkshire Food Co-op. “I finished some of my cakes in record time,” she said of the 18 double-chocolate layer cakes and flourless chocolate cakes the downtown establishment will use to stock its cases for the holiday weekend. And then there’s granola, carrot cake, cookies and her nearly famous raspberry almond rugelach. In fact, Jensen is just one of 42 vendors who will be selling their wares on Saturday morning at the last Berkshire Grown Winter Farmers Market before the summer markets start. While spring has been slow in coming to the Berkshires—meaning slim pickings characteristic of any shoulder season—there will be plenty of local sweet treats to hold things together.

“I love the winter market,” said Jensen, who has been a vendor there for three years. “It’s really nice to have a break in the winter [from the stress of the summer market season] and to see all my regular customers,” she added. In short, the Berkshire Grown winter market has been a great opportunity for Jensen to showcase what else she does besides pies, which are her staple at the Great Barrington Farmers Market. In the absence of a brick-and-mortar retail space—an issue she is hoping to remedy, if in time for summer, then certainly by the end of this year—advertising has been a challenge. The Berkshire Grown winter markets were instrumental for Jensen in solving this conundrum: “I was troubled as to how I was going to advertise for Valentine’s Day,” Jensen recalled. “And then I just brought Valentine’s Day cakes to the January market. It’s been a great way for me to get the word out that I do cakes as well as the pies, granola and muffins I sell at the Great Barrington market.”

In the absence of a retail space, there are limitations. Jensen, who bakes out of her home kitchen in town as well as the commercial kitchen at Hevreh, is outgrowing her space. Furthermore, she is “very involved [in her business] — so involved I just hired my first employee,” she explained, noting that she has been running the show by herself for quite a while. Jensen launched the Sweetish Baker in 2007 and ran the business for four years before taking a break to go back to school; she started back up in 2015 and has been gaining steam ever since. But how does one simultaneously grow a business while engaging in her craft full-time? This challenge is not unique to Jensen.

Doria Pollinger of H.R. Zeppelin Fine Handmade Chocolates is finally doing just that. On an equally exciting Thursday morning leading up to the busy holiday weekend, it took a bit of trial and error to connect with Pollinger. When she did call, it was fresh on the heels of having signed a lease on a new retail space at 47 Railroad St., the old Martin’s Restaurant. “I have a great team, and I am so excited!” said Pollinger of her imminent expansion. That said, she has no plans of abandoning the markets. In fact, she imagines it will be just the opposite.

“The markets are where the life is, where the future connections are, and where I find others who are like-minded,” Pollinger explained, adding “the markets are an inspiration.” Pollinger, who came to the Berkshires a scant decade ago, wasn’t always making chocolates. In fact, she formerly channeled her creativity into her job as an art teacher in New York. Today, as she looks at the trajectory of her business, one thing is clear: “Business has been interesting, [and] the Berkshire Grown markets have played such a big part of it.”

Pollinger is drawn to the community of vendors and shoppers alike, all of which create a veritable family when they converge. “Just checking into the market [in the morning] makes me happy and makes me feel very connected,” said Pollinger. “It is that thread, through people and organizations like Berkshire Grown, that has actually kept me afloat and engaged long enough to call the Berkshires home,” she added.

A vendor at the winter markets since 2012, Pollinger does not see her move to Railroad Street as precluding her involvement with Berkshire Grown. “It will even be more plausible to do the winter market because I will be able to send the elves out,” she said in a nod to her incredible team. And Pollinger herself will continue to make appearances. “I love people,” she said. “Seeing them, hearing their voices … there is a connecting thread that runs through everyone [in the Berkshire Grown community]” she explained. Pollinger cites Berkshire Grown as having enabled her business, in its infant stages, to be nurtured and to have a safe place to grow.

At the end of this season, Pollinger is brimming with appreciation. Her awareness that each of the vendors comes from a different place in life and with a different creative venture is what she calls “really the most heartfelt part of being a local artisan.” And when they all converge upon a single locale, it’s like hitting a proverbial sweet spot.

The Berkshire Grown Winter Farmers Market will take place Saturday, April 20, from 10 a.m. to 2 p.m. at Monument Valley Regional Middle School. Enter through the back doors to make sure you don’t miss any of the vendors who will be outside grilling sausages, making egg sandwiches and selling their wares. In addition to the Sweetish Baker and H.R. Zeppelin Fine Homemade Chocolates, sweet treats for Easter and Passover will be available from Auntie Elsie’s Oatmeal Crisps, Caroline’s Scottish Shortbread, Fahey Family Honey Farm, Les Collines and Berkshire Mountain Bakery.