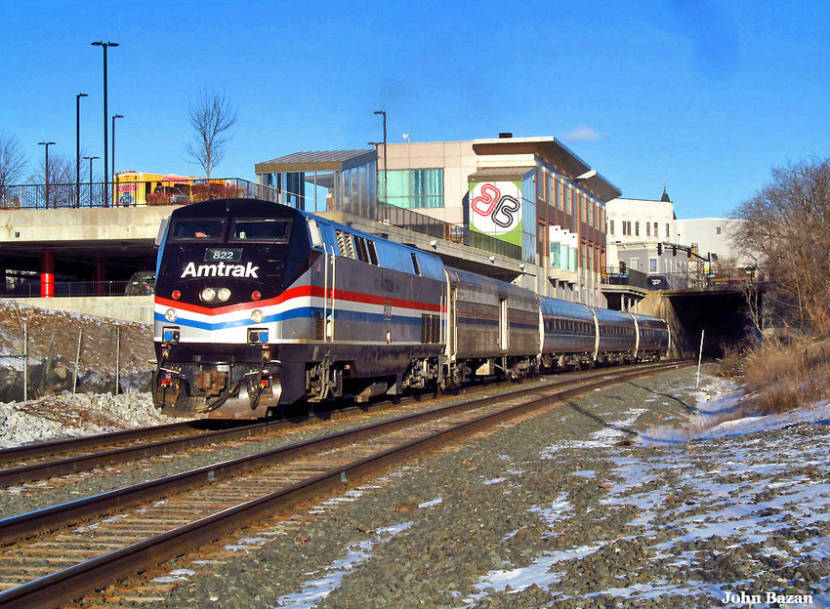 Pittsfield —The train hasn’t left the station — yet. But the possibility of dependable passenger trains once again arriving and leaving Berkshire County is very much alive on at least three fronts.

The plan that is closest to becoming a reality is one that state Sen. Adam Hinds, D-Pittsfield, envisioned last year, along with West Stockbridge rail enthusiast Eddie Sporn.

The flyer proposes weekend seasonal rail service from New York’s Penn Station to Pittsfield using an Amtrak line north through the Hudson Valley and turning east in the Albany area to Pittsfield. Click here to read about the 130-page study produced by the working group in March 2018.

Dubbed the Berkshire Flyer and modeled after a weekend service to Cape Cod from Boston, Hind’s proposal received funding from the state legislature for a study and later secured additional funding for a pilot program to begin service in 2020. The service will be provided by Amtrak.

The Berkshire Flyer working group met Monday afternoon (Oct. 29) at the Berkshire Regional Planning Commission’s offices in Pittsfield to advance the discussion and iron out more details around models for comparable existing service elsewhere in the country, so-called last-mile transportation issues, and the most effective means of marketing the service. Click here to see the PowerPoint presentation made by Anuja Koirala, the commission’s senior transportation planner.

Last-mile options — in other words, how to get to your destination after arriving in Pittsfield — include existing shuttle and limousine services offered by Kripalu, Enterprise Rent-A-Car, Zipcar, BRTA buses, conventional taxis and on-demand peer-to-peer ride-sharing services such as Uber and Lyft.

Skeptics of the Berkshire Flyer approach have been critical of the fact that it will not service Berkshire County residents but rather, it will target only wealthy New Yorkers and millennials who want to come up for the weekend and leave their cars at home.

Many of those skeptics were fans of a previous plan, supported by the Great Barrington-based nonprofit Train Campaign, for daily passenger rail service from New York’s Grand Central Terminal via Connecticut and up through the Housatonic Valley to the Berkshires. That plan includes four stations in Berkshire County: Sheffield; Great Barrington; Lee; and the terminus at the Intermodal Transportation Center in Pittsfield. As such, the Housatonic rail plan would have provided greater value to Berkshire County, both in terms of tourism for those towns and for local residents looking for mass transit.

But there’s one major problem with the Housatonic plan. That proposal, which would have utilized an existing freight corridor used by Housatonic Railroad, stalled because of an unwillingness to cooperate on the part of the state of Connecticut, which, for a variety of reasons, is facing intense fiscal pressures. So in order to do its part, Connecticut would have to spend an estimated $200 million on upgrading the rail line – a rail corridor that the state owns and leases to the Housatonic — and renovating existing stations or building new ones.

In an interview at the Capitol in Hartford less than two years ago, Gov. Dannel Malloy told this reporter that since the Bay State would derive far more benefit from the restoration of passenger service than Connecticut, then Massachusetts must pay “a disproportionate amount.”

“Don’t get me wrong; I understand it might serve [their] needs,” Malloy said. “But in terms of the numbers of people that get served, it really is driven by Massachusetts traffic, and there is no way to afford to do that project if this is ‘they take care of their side of the map and we take care of our side of the map.’ And by the way, that’s just not how projects get done.”

Meanwhile, work has begun on the Massachusetts side. The state is spending $30 million to the replace tracks with modern welded rail after purchasing them for $12.1 million five years ago. The current track structure of jointed rail is quite old and so its replacement is necessary even if only to continue the vital freight service. The Housatonic line in both Massachusetts and Connecticut has been plagued with derailments.

The initiative to restore passenger service to the Berkshires started under the administration of former Gov. Deval Patrick, who owns a home in Richmond and toured the Berkshires in 2014 to promote passenger service to New York. The administration of Gov. Charlie Baker has been less supportive, though the state Department of Transportation has been helpful, Berkshire rail advocates say.

“Baker is not as friendly as Patrick,” said Karen Christensen, a businesswoman from Great Barrington who heads the Train Campaign. “Getting them to pay attention to western Massachusetts is difficult. But I do think we have raised consciousness at DOT.”

There have been some other encouraging signs on the passenger rail front. Earlier this year, MassDOT unveiled a draft rail plan for Massachusetts that included funding for a study of high-speed rail between Boston and Springfield.

In September, she stopped in New Milford, where she met with Mayor Pete Bass and a trio of state lawmakers from the area. Christensen probably felt right at home. New Milford Town Hall looks strikingly like Great Barrington’s because it was designed by the same architect.

“There is a lot support among legislators, no matter what their party and they’re very consistently pro-rail,” Christensen said in an interview. “They were adamant that they want this line up to the Berkshires.”

Bass could not be reached for comment but officials in New Milford are clearly enthusiastic about restoring passenger service because of what it could do in the other direction: enable the town’s commuters to access densely populated Fairfield County and its tens of thousands of jobs to the south.

One such lawmaker is Republican Brian Ohler, a first-term state representative who lives in Canaan and represents much of Connecticut’s Northwest Corner. He said passenger rail service along the Housatonic Railroad corridor halted in 1971, and the campaign to restore it has been a topic of discussion for decades but it has intensified over the past few years.

“Connecticut has long been a ‘broken rail’ in the overall plan to restore passenger train service,” Ohler, a combat veteran and security consultant, told The Edge. “I believe that this corridor is well overdue for a full upgrade of its infrastructure and I support this project.”

Indeed, Ohler says the freight line itself is invaluable to the economy on both sides of the state line. That alone would make the track upgrades worth the cost.

“Once the track can be upgraded, then I believe the timing would be ripe enough to incorporate passenger service,” Ohler explained.

Indeed, when he traveled to Cornwall, Conn., to make the case for passenger service in 2014, former Berkshire Regional Planning Commission head Nat Karns said that even if passenger rail does not return to the Berkshires, the 100-year-old freight lines must be rebuilt anyway. And, apart from station acquisition and construction, there is little difference in costs between building to freight and building to passenger rail specifications.

One of the largest sources of jobs is the sprawling Becton Dickinson plant in Canaan. As the world’s largest manufacturer of syringes, BD employs hundreds in the region. Also affected by any disruption in freight service would be Specialty Minerals, which has a large Canaan plant that processes limestone and other stones and minerals.

Over the state line, the company formerly known as Sheffield Plastics also has a medium-sized plant on Salisbury Road near the tracks. The company employs approximately 150 and manufactures industrial-grade plastic sheeting.

In addition, Housatonic Railroad says the Massachusetts portion of its freight line serves two paper companies, a limestone quarry, a distribution center, a public warehouse, a lumber shipper, a concrete manufacturer and a fertilizer receiver.

Ohler cautioned that, as in Berkshire County, many of his constituents in Connecticut have “mixed emotions about reinstating passenger service” and that restoration of passenger service would require a careful examination of each community’s needs. Those who are focused on economic development, for example, tend to be squarely behind the concept.

But people who live full-time near the tracks might not welcome the increased rail traffic and the frequent horn blasts associated with trains traveling across grade crossings, for example.

“While the costs may be steep, I believe that there is a greater return on investment,” Ohler continued. “I believe, in the end, that this concept can be a sustainable revenue generator for both small and large businesses, municipalities, and both Massachusetts and Connecticut.”

While it’s obvious that Malloy, the lame-duck Connecticut governor, will not support paying for the restoration of passenger service on his side of the border (he did not even mention it in his much vaunted 30-year $100 billion transportation plan), it is unclear what position his successor will take.

Malloy is finishing up his second term and is not running for re-election on Nov. 6. Republican nominee Bob Stefanoswki has promised to eliminate “wasteful” spending and repeal the state income tax over 10 years. That tax accounts for half the the state’s revenue. It is hard to imagine that he would support the Train Campaign’s Housatonic proposal.

Democratic nominee Ned Lamont has talked a lot about transportation during the campaign and is hardly hostile to public transit, but he has also emphasized a need to control spending. The Lamont campaign did not return a message seeking comment.

Christensen was hopeful that Republican Mayor Mark Boughton of Danbury would receive the gubernatorial nomination. Danbury is just to the south of New Milford, so Boughton realizes the economic impact the revitalization of rail to the region might have. But it was not to be.

Christensen said there are precedents for states picking up much of the tab for rail improvements in another state, which is one of the stipulations that Malloy said would be needed for his support. Indeed in his interview with this reporter, Malloy cited an example.

Malloy pointed out that his state has committed hundreds of millions of dollars to the recently completed New Haven–Hartford–Springfield high-speed commuter rail line. Connecticut paid the lion’s share of the costs to upgrade the Massachusetts portion of the line.

Funding from Massachusetts appears elusive, at least at this point. The MassDOT draft rail plan for the state included funding for the aforementioned study of high-speed rail between Boston and Springfield but it rated both the Housatonic line’s benefits and feasibility as “low” and noted “No current likelihood of service improvements in Connecticut.”

Meanwhile, the next meeting of the Berkshire Flyer working group is Nov. 26, with date and location to be determined.