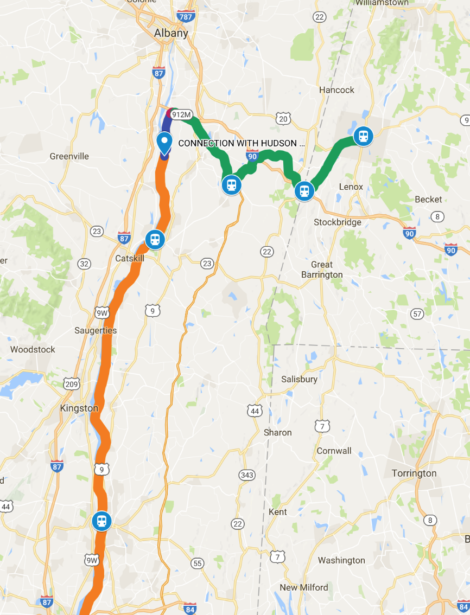 A map of the 'Berkshire Flyer' route that heads northwest from Pittsfield, then south along the Hudson River to New York City. It would terminate in Penn Station.

I am a member of the working group led by the Massachusetts Department of Transportation that is examining the feasibility of seasonal passenger rail service, the “Berkshire Flyer,” between Pittsfield and New York City via New York State. The views expressed here are my own.

If the choice were between spending hundreds of millions of dollars on a rail connection to New York City via Connecticut versus a bus connection to Wassaic, New York then I would certainly opt for the latter. But there is a third choice — one that will not cost hundreds of millions of dollars. That is the route that is being studied for the Berkshire Flyer.

The Berkshire Flyer route utilizes railroad track in a state of good repair that for the most part currently hosts intercity passenger trains. The section of this route that runs along the Hudson River is being upgraded to run trains at speeds of up to 125 mph. One option being explored is for the train to pass through Albany-Rensselaer. This option would entail no construction whatsoever. A second option being examined is to lay one-half mile of new track in New York that would allow trains to bypass Albany and reduce the trip time by an estimated ½ hour or more.

Click here for a map of the route that would bypass Albany.

So, we’re not talking hundreds of millions of tax dollars to rebuild 100 miles of track and related infrastructure. That train to Danbury, Connecticut, has left the station and it ain’t coming back. The Berkshire Flyer plan takes the sensible approach of utilizing existing well-built infrastructure to the greatest extent possible to connect the Berkshires with New York City. If this proves feasible, and I believe that it will, it will be a far superior option to buses from every possible perspective: economic development, tourism, employment mobility, etc. And these benefits would be spread evenly across the county, instead of being heavily weighted to the south. Columbia County would also benefit from Berkshire Flyer service. That’s why I believe there is a reasonably high probability of New York State buy-in.

I’d be happy to provide more information on the plan to anybody that is interested. And I believe all residents of Berkshire County and Columbia County should be interested as passenger rail service to NYC, along with high-speed Internet, are perhaps the two most significant keys to the region’s economic future. Email me at contact@robinroadconsulting.com

— Sappho
Read next: Little engine that could: Mount Washington flips switch on fiber