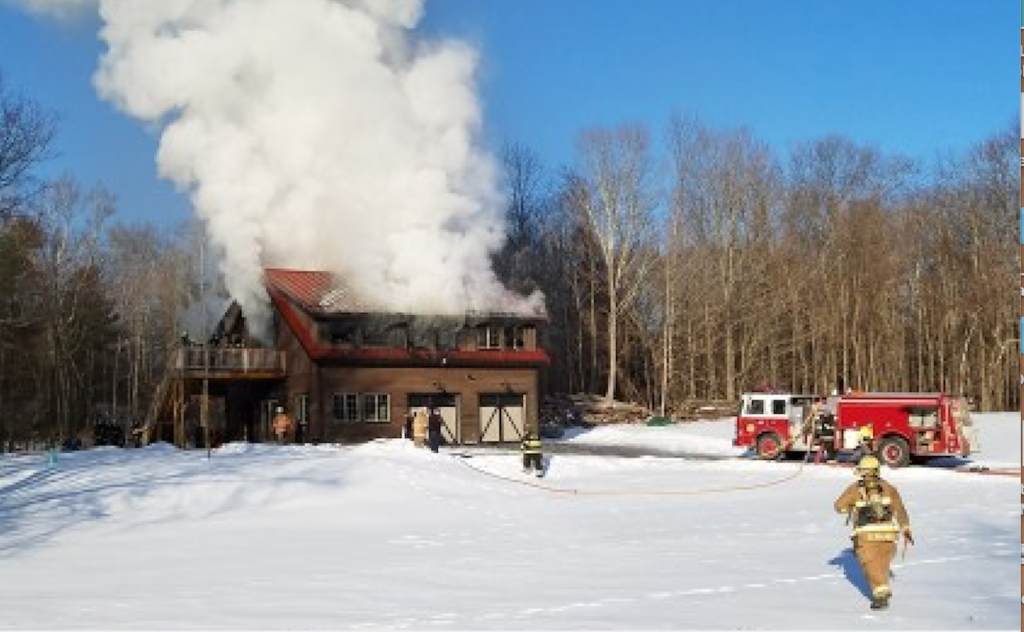 Sheffield firefighters approach the Karpinski home on Home Road on the morning of March 13, 2019, where five people were found to have died. Photo: Ed Harvey

Sheffield — Documents released by the Berkshire District Attorney’s Office concerning one of the most notorious crimes in county history suggest a possible motive for a Sheffield man who killed his wife and three children before setting the family home on fire and taking his own life nearly a year ago.

New redacted documents made available to journalists yesterday make clear that Luke Karpinski killed his three children after picking them up from school, then lay in wait for his wife, Justine Wilbur, who was returning home from her job as a patent attorney in Albany, and brutally slit her throat after she entered their house at 1343 Home Road. The following morning, he lit the house on fire and died of smoke inhalation, though there were also opiates in his bloodstream and an autopsy revealed some pill fragments in his stomach.

The three young children — 7-year-old twins Alex and Zoe, along with Marek, 4 — were found dead in the second-floor master bedroom, the entrance of which was barricaded by furniture. Their bodies were “huddled together” and “badly damaged by the fire,” unsealed court documents said last year.

Two family dogs, both dead, were found in a bathroom closet. Two 20-pound propane tanks were also found. Karpinkski was in a third-floor loft accessible by a ladder. Karpinski’s body was found in a bed apparently lying down. Bottles of liquor and a blood-stained knife were found nearby.

Wilbur said her husband had been admitted to a psychiatric facility and she believed Karpinski’s addiction was a side effect of the medications he took as part of his recovery from leukemia in his late teens. By mutual agreement, Wilbur subsequently put parental controls on Karpinski’s electronic devices and was the only person with the access codes to the devices.

These restrictions, along with Karpinski’s recent cell-phone downgrade from an iPhone to a clamshell phone, likely mandated by his wife, “could indicate a current stressor in Luke and Justine’s marriage,” according to State Trooper William DeSantis, a detective assigned to the DA’s office who investigated the killings.

Karpinski told officials at the Southern Berkshire Regional School District that he needed to pick Alex and Zoe up at 10:30 a.m. the morning of March 12, 2019, for dentist appointments. Police say that, in fact, the dental appointments were not scheduled until April 9.

A witness at the school also told police the two children, Alex and Zoe, were having behavioral or academic issues. In addition, her youngest child, Marek, had been kicked out of his day care center March 8, a partner and supervisor at Wilbur’s law firm told DeSantis.

Karpinski took his children home from school and killed them. Their manner of death is unclear from the warrants and witness statements. The documents suggest the cause could not be determined because of the poor condition of the bodies. However, death certificates made public last month say all three died by “violence of uncertain etiology” and the deaths were listed as homicides.

Police confirmed through video surveillance footage that when their bodies were found the morning of March 13, the children had the same clothing on that they had worn to school the previous day.

Likewise, surveillance video at Wilbur’s law firm from March 12 also confirmed that she was clad in the same clothes at work that day as she was wearing when firefighters encountered her stiff body downstairs in a utility room the next morning.

The couple, who were high school sweethearts from Dalton and 1996 graduates of Wahconah High School, moved in 2004 from Lowell to Alexandria, Virginia, where Wilbur practiced patent law and Karpinski worked as a patent examiner. They had recently returned from Virginia to the Berkshires about two years before the murders to build a home and raise their family. Wilbur commuted to Albany at Hoffman Warnick, while Karpinski worked from home and was charged with keeping track of his children’s affairs at school.

Police discovered internet searches performed by Wilbur seeking answers to the question: “Why does my husband ignore me and what to do about it?” Another witness, a friend of Wilbur’s, said earlier that Wilbur had confided to her that she had almost left her husband at one point “in the past,” but that they had managed to work things out. The couple, both 41, had been married for approximately 20 years.

“I send my sincere condolences to the family and friends of the victims of this horrific and unimaginable crime,” Berkshire District Attorney Andrea Harrington said in a statement accompanying the release of the documents.

“I would like to thank the first responders for putting themselves in harm’s way in what was, unfortunately, a futile rescue attempt,” Harrington continued. “I asked the Massachusetts State Police to conduct a thorough investigation in this matter because the victims cannot speak for themselves and I felt that a full accounting of what occurred was in the interests of justice. I thank the State Police led by the Berkshire Detective Unit for going above and beyond in this investigation.”

See the complete archive of Edge stories on the Karpinski murder-suicide below: