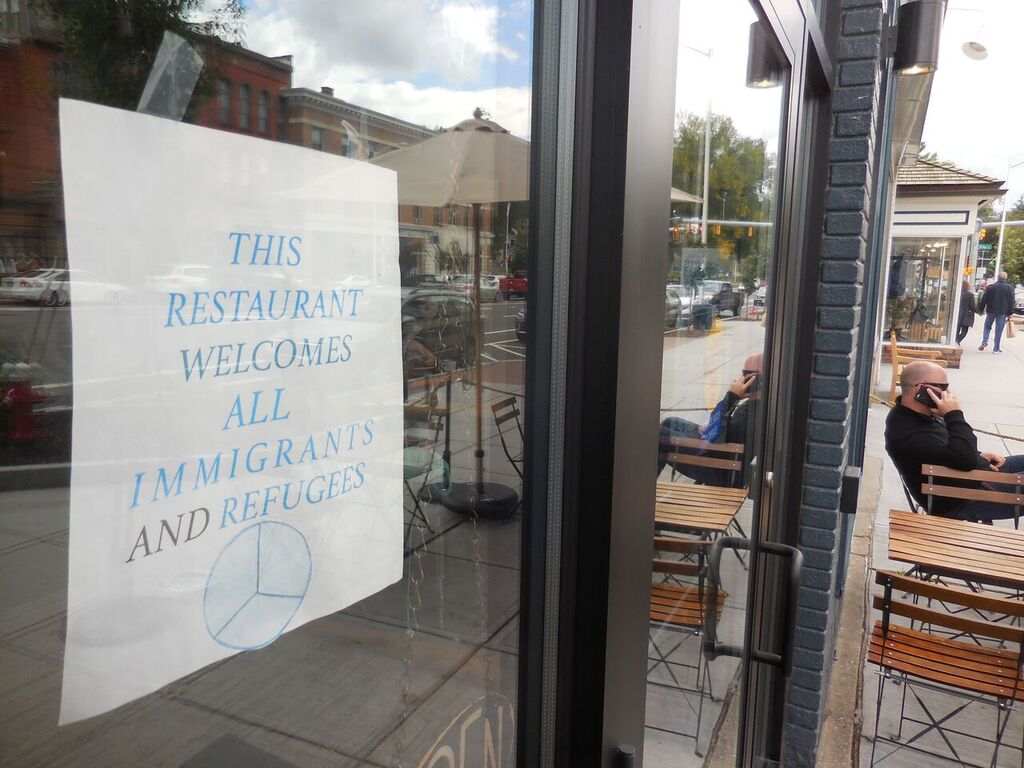 Fuel is but one Main Street establishment that welcomes immigrants and refugees with open arms. Photo: Terry Cowgill

Great Barrington — Reaction in the state and in Berkshire County has been swift and furious to President Trump’s announcement that he would rescind the federal Deferred Action for Childhood Arrivals program.

Trump’s attorney general, Jeff Sessions, made the announcement about pulling the plug on DACA on Tuesday. DACA was seen as a signature achievement of Trump’s predecessor, former President Barack Obama, who instituted the measure by executive order in 2012.

DACA allowed certain undocumented immigrants who entered the country as children to be eligible for a renewable two-year period of deferred action from deportation and gave them eligibility for a work permit. After Trump’s announcement, the program’s termination will be phased in over the course of the next six months.

It has been estimated that there are some 800,000 young people in the program, with about 8,000 of them in Massachusetts. They are commonly known as “dreamers,” so named after the federal DREAM Act.

According to two Berkshire County groups that advocate for those who have come here from abroad – Multicultural BRIDGE and the Berkshire Immigrant Center – there are an estimated 12,000 immigrants in the county, with 66 percent of them being Latino.

Brooke Mead, who heads the Berkshire Immigrant Center, said she does not have an estimate on how many DACA recipients are in the Berkshires, but the immigrant center does consult with 20 to 30 immigrants about DACA and takes on new DACA clients every year.

“There are definitely people we work with who have always known that [DACA] could go away and, under this president, the stakes have been raised,” Mead said in an Edge interview. “Last week it was unfathomable to me that this president could do something so cruel, so un-American and, quite honestly, something that’s just bad policy.”

Mead read aloud a portion of an email she recently received from a client. It sounded like a plaintive cry more than anything else: “Trump has finally put the last nail in the coffin. I am uncertain for my future. Will I face deportation? They know where I live and work.”

“We’re talking about people between 18 and 36,” Mead continued. “My heart breaks for them as a friend … I consider them to be as American as I am. They just didn’t have papers. People are scared but also in a little bit of shock.”

Berkshire County towns have a reputation for being sensitive and supportive of the immigrant community. At least three municipalities in Berkshire County have passed laws adopting a so-called trust policy.

At its annual town meeting in May, Great Barrington joined Berkshire County’s two cities – North Adams and Pittsfield – as well as the town of Stockbridge in adopting such policies. Great Barrington’s policy designates the town “a safe and inclusive community” that will not enforce federal immigration law or “aid in the detention, transfer, transport or deportation of residents for civil immigration purposes.”

The Massachusetts State Police have a similar policy, though, last year, Gov. Charlie Baker announced a new policy “allowing the state police to hold some people on federal immigration detainers would only apply to criminals who present a danger to public safety.” A state Safe Community Act is awaiting action on Beacon Hill, where it was referred in January to the legislative Committee on Public Safety and Homeland Security.

In Great Barrington, several businesses have posted statements of support and welcome for immigrants announcing that their establishments “welcome all immigrants and refugees.”

One such store is Robin’s Candy on Main Street. Owner Robin Helfand says she has always been supportive of the immigrant community and stands “very much opposed” to Trump’s move.

“I am vociferously opposed to those who would do something that is so counter as our history as a country,” Helfand told the Edge.

Helfand, who has also lived in Germany and Australia, said not every nation is as heterogeneous as the United States. She quoted the Statue of Liberty and its inscription urging the world to “Give me your tired, your poor/Your huddled masses yearning to breathe free.”

“Unless you are Native Americans, we are all immigrants,” Helfand said.

Helfand held a one-month change drive to raise money for the Berkshire Immigrant Center’s legal fund that assists immigrants who need help. She recently sent the center a check.

Evidently, most of the state’s top elected representatives agree with Helfand’s assessment:

“President Trump made the wrong decision today that could negatively impact our economy and many of the Commonwealth’s families,” Gov. Baker said in a statement Tuesday. See image of Baker’s tweet announcing the statement below: 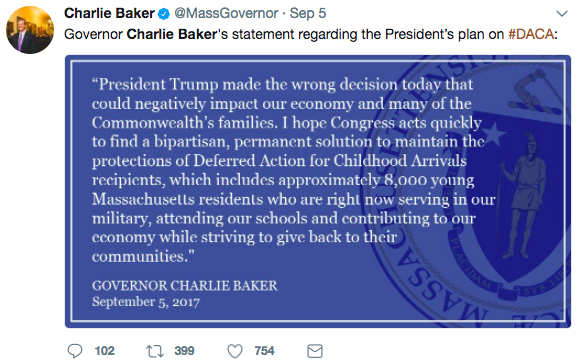 “Sending innocent DREAMers back to their home countries through no fault of their own is shameful. These individuals are our neighbors, friends, and family members. They have contributed to our communities in the hopes of attaining the American Dream. I urge Speaker Ryan and the Republican House leadership to bring the DREAM Act to the floor for a debate immediately.”

Sen. Ed Markey characterized Trump’s move to end DACA as “just plain evil,” and adding that “We should not punish these young people who know no other home than the United States of America.”

These Dreamers, Markey said, are fine upstanding citizens, many of them working as “engineers, police officers, teachers and students, many in our great Massachusetts universities” and “in the military.”

Markey supports a legislative fix before the six-month phase-in period expires “so that individuals who were brought here at a young age can earn citizenship by serving in the military or pursuing higher education.

“This decision by the Trump administration to repeal DACA will not stand. We will not let it,” Markey continued. “With Congress returning this week, Republicans should prepare for a political juggernaut of voices and calls and protests demanding protections for Dreamers who deserve their opportunity to achieve their American dream.”

Not to be outdone, progressive firebrand Elizabeth Warren told WBUR radio Trump was “morally despicable” and “morally wrong to say that we’re going to throw 800,000 young people in this country out.”

“We have a bipartisan bill already on the floor that would make the program for Dreamers permanent,” Warren explained. “I hope that we can get it through both the Senate and the House.”

Some conservatives – and Trump himself – have suggested that Obama’s original order on DACA was unconstitutional, an abuse of executive power, unfair to American workers and was tantamount to amnesty for illegal immigrants.

Indeed, several state attorneys general were preparing to bring a legal challenge against the program, even as the District of Columbia and a collection of 15 states including Massachusetts filed a lawsuit Wednesday aimed at challenging Trump’s proposed elimination of the DACA program.

But, as Warren pointed out, no suit has actually been filed challenging DACA: “If there is a challenge in the courts, then let the courts play that out … no court had forced President Trump to roll back DACA.”

State Rep. William “Smitty” Pignatelli, D-Lenox, told The Edge that he was saddened by Trump’s decision because it “penalizes the wrong people.”

“It’s flat-out sad to misrepresent the issue and penalize a baby who came when they’re six months old, and now you’re going to ship them back with six months notice?” Pignatelli said, sounding a little emotional.

He echoed Helfand’s sentiments about the U.S. being a nation of immigrants and Markey’s about a legislative fix, adding that, “This has been a wedge issue through multiple presidents of both political persuasions … This should be an easy fix if intelligent people put their heads together.”

“Our president and Congress make difficult decisions all the time – that’s why we elect them,” added Mead of the Berkshire Immigrant Center. “Trump could have asked for more time … Now we look to Congress. We are ready for a fight.”