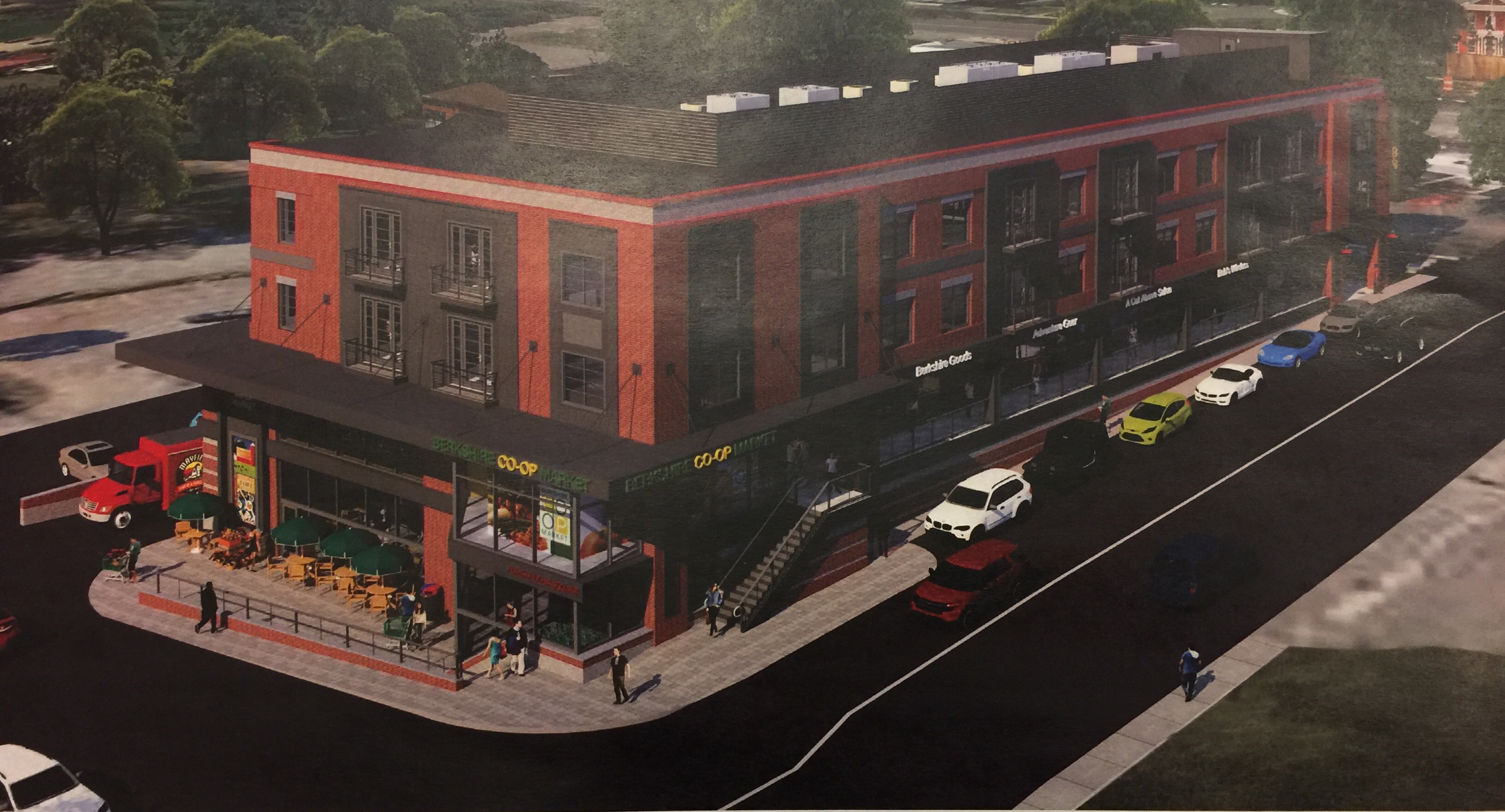 As part of a larger $15 million development on Bridge Street, Benchmark Development’s first phase will build the Berkshire Co-op Market’s new and expanded store, with other retail and office spaces and two levels of condominiums above. Rendering by Gruskin Group Architecture & Design.

Great Barrington — Developers of a $15 million complex that will include an expanded Berkshire Co-op Market unveiled the first set of renderings to a town board Wednesday (October 12), giving an indication of how the look and feel of Bridge Street’s eastern end will change when the building and parking area goes up.

Benchmark is under contract to purchase three lots: the current site of the Co-op; a lot behind it on the Searles Castle property; and the row of buildings next to the Co-op parking lot that once housed, among other businesses, Laramee’s Cleaners. This latter property, along with the current Co-op parking lot, will become the home of a 40-foot high, three-story building that will feature a 14,000 square foot Co-op as an anchor retailer. There will be space for multiple retailers and offices, and 22 condominium units.

The renderings show a vastly altered look and feel to upper Bridge Street, but Charles said they are “taking cues” from the surrounding architecture styles downtown, using brick, steel, and industrial-style windows that harken back to the town’s earlier days and its industrial past.

“Design-wise, we want the building to fit into the downtown,” Charles said.

Stephan Green, an architect whose office is on Bridge Street, said he liked what he was seeing and hearing. “It sounds like a really great project,” he said. “The content of building sounds exciting.”

Green also offered Charles and Cohan some advice about style. “You don’t want to mix up the manuscript of history,” he said. “You don’t want people coming back 100 years from now wondering when that building was built.”

Charles said, while he had envisioned a “more contemporary” building, he wanted “to be sensitive to the history of the town.”

“I’m not interested in putting up some trophy building,” he added.

Green said, ideally, Benchmark would “create your own vocabulary that is not about some other architecture.”

Committee member Stephen Dietemann, also an architect, said the only thing he found “unfortunate” was the open parking area that will go in where the current Co-op now sits.

“I really like the building and the streetscape,” Dieteman said, adding that he wished the parking was “less suburban” looking.

There was some discussion of adding things in the future to lessen that suburban effect.

But Charles and Cohan explained that they had gone through numerous options and this one was the best given all the “competing forces,” Charles said, that would keep everyone happy and the place running smoothly on a tight property in the middle of town.

Cohan said these “urban forces” were constricting. For instance, he noted, “the loading dock is the tail that wags the dog.” The new building will keep semi trailers from having to turn around on Bridge Street and block traffic, as is now the case.

Other options for parking, he added, would make the Co-op “lose its prominent entrance. Those are the challenges of designing a project that would keep the Co-op downtown.”

Charles said there were a lot of variables in play: “How do we balance the Co-op’s requirements with the requirements of the larger development?”

The plans call for 11 residential units per floor on the top two floors. Each will have a “Juliet balcony.” These units will have large windows and 9-foot ceilings. The entire building will be built to save energy using high-efficiency products, but will not be LEED-certified due to cost. Charles said it was “hard to not build a highly efficient building these days. We’re putting dollars into low flow toilets, greater wall and window insulation,” he said.

“The best heating system is a well-sealed building,” Green said.

The Co-op, Charles said, is happy with the design. Cohan explained that the Co-op cafe’s outdoor seating will surround the main entrance, making the outside flow into the inside past a 13-foot glass wall.

Charles agreed. “From a development standpoint, those are clients that you aren’t going to get until the building is up,” he said.

Benchmark, he added, is in talks with some potential office-space users that can “forecast out, but most businesses will be smaller,” he said, and unable to commit to a lease until the building is up and running.

The second phase of the project, 36 condominiums and a parking garage on the Searles Castle lot, has not been designed yet, Charles said, but said the design would take inspiration from early 1800s architecture nearby since the lot is so close to the Castle.

It is that proximity to the Castle that binds development to historical zoning regulations, something that caused a snag for Benchmark at a recent Historical District Commission meeting over new development there. The chairman of the Commission had said that it would look at what impact the proposed structure might have on the Castle, built in the 1880s. Unlike the Design Advisory Committee, the Commission has the authority to approve a project.

Benchmark anticipates a March 2017 groundbreaking on the first phase, and a 12- to 13-month construction period. Charles said final plans would be brought back to the Committee.