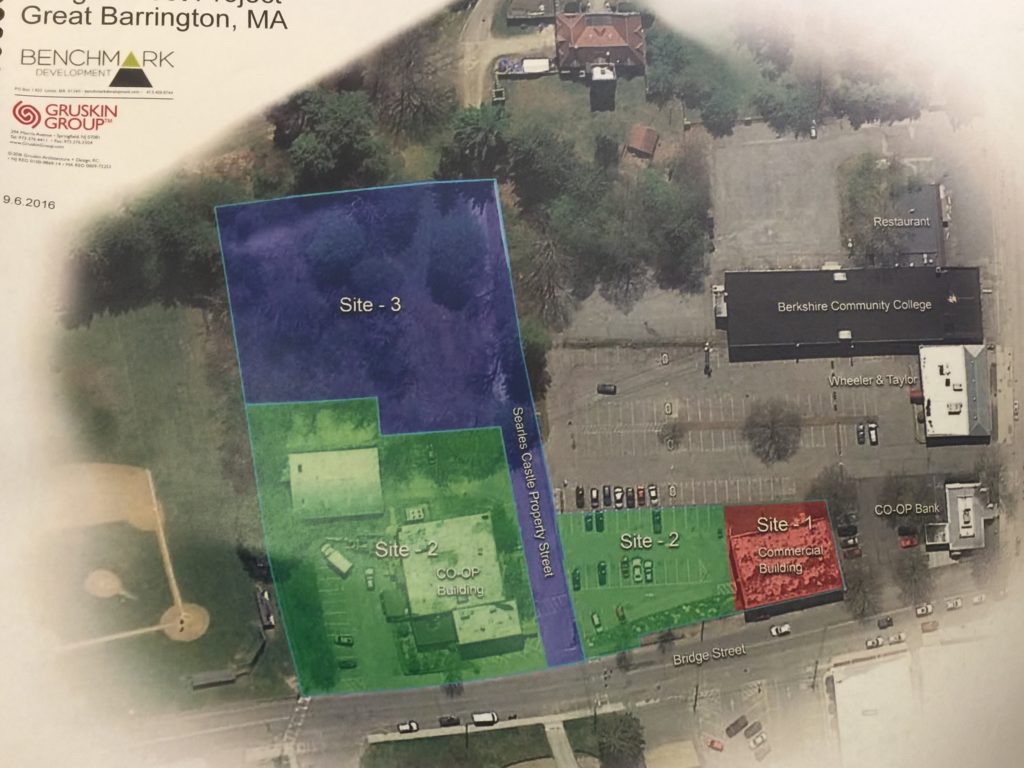 Because of its proximity to the historic Searles Castle, Site - 3 (in purple) is zoned as historic property. This may create hurdles for Berkshire Co-op Market developers Benchmark Development. The Co-op will move to a new 14,500-square-foot building at the site of the current parking lot and former Laramee's Cleaners block. The current Co-op building will be razed for a parking area. The development will feature condos, retail and office space. The above illustration shows the location of the current Co-op building (Site - 2 in green to left of 'Searles Castle Property Street' in purple).

Great Barrington — Part of the proposal for a $15 million redevelopment on Bridge Street hit a snag Thursday (September 29) because one of the three parcels in the project sits in what is currently part of the Searles Castle property and is, consequently, in the town’s historic district overlay.

Lenox-based Benchmark has a contract for the land with Searles Castle owner Educational Consultants, which operates the John Dewey Academy, a therapeutic preparatory school there. The Castle was built in the 1880s by Mary Hopkins, heiress to a railroad fortune who married interior and architectural designer Edward Francis Searles. It was she who arranged the donation of land on Bridge Street for the construction in 1898 of the former Searles Middle and High School that was designed by Boston architect Henry Vaughan.

The other two abutting parcels sit in a mixed-use zoning area and are not affected by historic regulations.

Benchmark principals Michael Charles and Brian Cohan had informally brought the plans to the Historic District Commission meeting Thursday night (September 29), and were met by the reality that the Searles parcel’s proximity to the Castle and its carriage house may raise some hoops for Charles and Cohan to jump through.

Commission chair Don Howe told the Edge that buying the property doesn’t change the zoning, and trying to take it out of a historic designation could mean years of legal tangles.

The commission, he added, works under the aegis of the state Secretary of the Interior, which ultimately reviews anything proposed in state historic districts. Howe said the land’s proximity to the Castle, and particularly to the old carriage house, makes development there up for commission scrutiny.

“We have control of it,” Howe said. “We will be looking at the significance of the impact on the Castle.”

When asked if Benchmark’s way around this was through appropriate design, Howe wouldn’t say.

“This was an initial presentation and introduction,” he said. “We have no strategy yet; we don’t have a finished plan. We want to go through a collaborative process and work with the town. I’m not overly concerned. We got initial feedback and will continue to engage with them.”

Selectboard member Ed Abrahams just happened to be at Town Hall and so popped into Thursday’s commission meeting. He said, while the town’s protection of historical property is to be applauded, growth is also important.

“With hard work, we will hopefully end up with a better Co-op and a better site than it is now, and a remediated [former] dry cleaners,” Abrahams said. “We could end up with a win-win.”

In a town where many residents are struggling to keep up with property taxes over municipal and school insurance increases, town officials are aware of the need for new growth, as well. Bridge Street appears to be one promising route.

“We’re looking at around $75 million going into Bridge Street,” said town assessor Chris Lamarre, adding up Benchmark’s project, the redevelopment at Iredale Mineral Cosmetic’s new headquarters around the corner, the renovation of the former Searles School into a hotel, and proposed developments on both the former New England Log Homes and E.B. Dolby Florist sites.

There is also an imminent $2.1 million in infrastructure work to the area to support all of it.

Yet Benchmark, like other Bridge Street developers, is only beginning its walk through the town’s gauntlet.

“It’s going to the Design Advisory Committee in the next couple of weeks,” Howe said. “The design review is only advisory. We have the authority.”