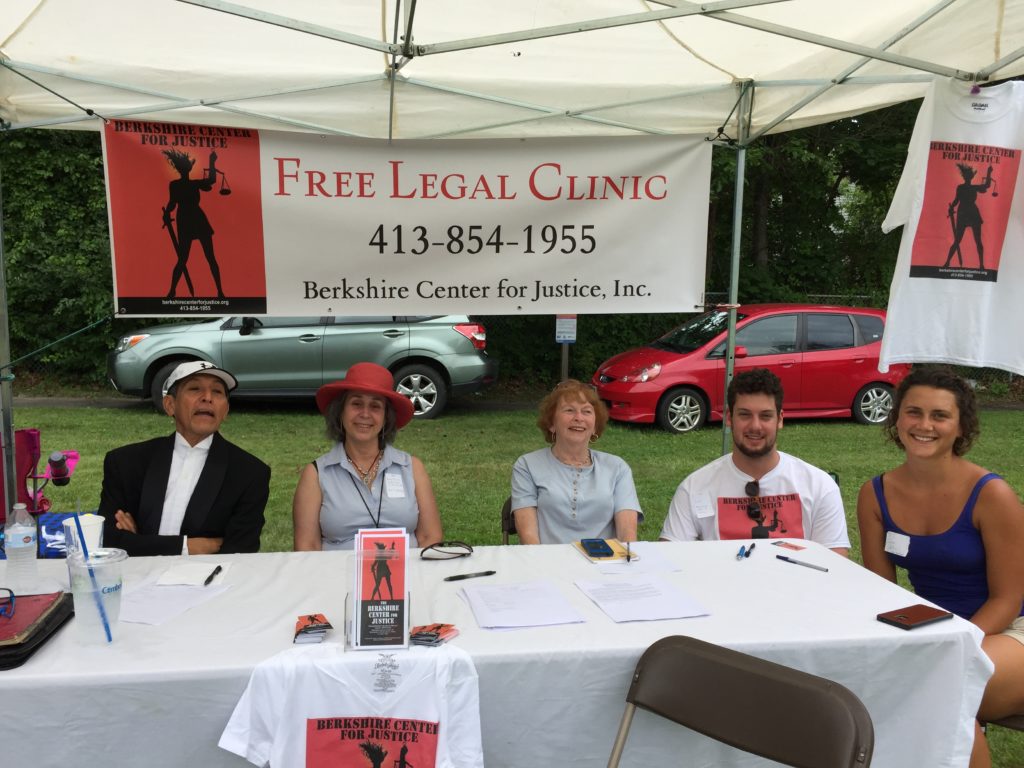 At the 44th annual Gather-In in Pittsfield, the Berkshire Center for Justice was on location with a Free Legal Clinic: from left Caesar Valdes, Attorney and BCF Director Eve Schatz, Janet O'Brien, Ziev Dalsheim-Kahane, and Iolani de Ris. The Center for Justice will have its booth set up this weekend, August 12 and 13, during the Pow Wow at the Great Barrington Fairgrounds.

Berkshire Center for Justice goes on the road; mobile office at Fairgrounds event

Great Barrington – For the past 11 years the Berkshire Center for Justice – also known as the Free Legal Clinic — has been offering free legal advice system on such matters as consumer protection, tenant rights, substance abuse, access to education, housing, homelessness, teen pregnancy, access to medical care, elder law, immigration, sexual harassment, foreclosure, bankruptcy and family law to those throughout the county who cannot afford a lawyer to defend their rights or have difficulty in realizing that they could have support navigating the legal system. So far, the center has helped more than 1,000 clients.

“We may be the best kept secret in the Berkshires, but we are really making a difference,” explained the Center’s founder and director Eve Schatz, during an interview at the modest BCJ office on the second floor of the Barrington House on Main Street. “BCJ is one of 23 nonprofit, sliding scale direct legal providers in the country, and the only organization to offer free legal clinics in the Berkshires. W modifying what a law office can be. We address social and community issues. We consider ourselves to be justice-minded.” 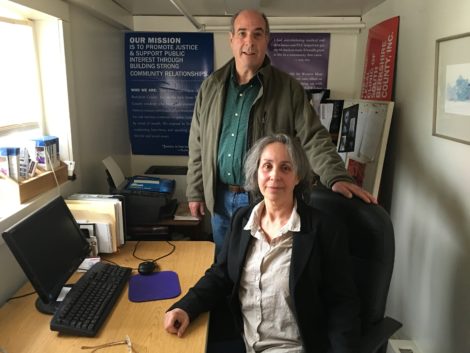 Equal access to legal representation, she notes, “is the foundation of social justice. That’s our primary our goal, to have everyone in need of legal advice to have access to it, regardless of income, immigration status, sexual orientation, income level, age, or mental ability. These are real issues that I see right here in the Berkshires. Our other goal is for the BJC to have all the resources to approach that aspirational goal.”

She continued: “The per capita income in the Berkshires, on average, is a little more than half that of the state. And this Administration – the Trump Administration – is cutting after-school programming and our free food program. He and Education Secretary Betsy DeVos are taking away from the most vulnerable: young children and the elderly who can’t fend for themselves. DeVos wants to do away with student loan forgiveness and income-based repayment on education loans that can exceed monthly rent. And when someone defaults, it becomes a hornet’s nest. Every day, I fight for justice.”

As an example she related how her office had received a call from an elderly woman who was ill and being sued by an international bank. She was hospitalized when she received notification that she was in danger of losing her house unless she provided documents in a court hearing. Because she was in hospital, it was impossible for her to meet the deadline to provide documents. She called the Center in a panic.

“We were able to assemble the documents for her so that she didn’t lose her house,” Schatz recalled. “We managed to get the case dismissed for her. We really operate out of compassion for people.” 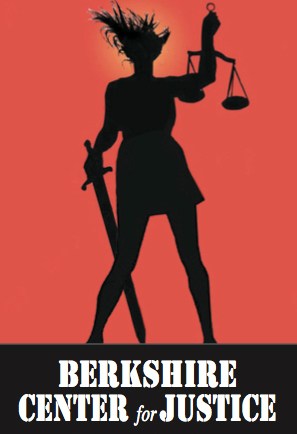 She points out that the Center not only provides free legal support for those who would otherwise have no legal representation but also educates its clients – and the wider community – through programs that “empower the disenfranchised and under-represented.” The Free Legal Clinic has a network of mediators, translators in Portuguese, Spanish and sign language, and a roster of life coaches to restore confidence.

And the Berkshire Center for Justice also has a broader outreach mandate, one expression of which is an initiative to make its services more accessible – and visible.

Every Wednesday, from 12 to 1 p.m., the Center conducts a free legal clinic during the Guthrie Center’s Free Lunch Program on Van Deusenville Road.

And this Saturday and Sunday, August 12 and 13, the Center’s volunteers and staff will offer a free legal clinic available at the 12th annual Rock, Rattle & Drum Pow Wow being held at the Great Barrington Fairgrounds.

This year, the theme of the Pow Wow is “Rising Like Water.”

“One of our volunteers is associated with the Pow Wow, so we were asked if we wanted to be involved,” Schatz recounted. “They said they’d love to have our tent there. The theme – Rising Like Water – suggests that the community rises together in support of each other for justice. And that is the role of the Berkshire Center for Justice.”

Three weeks earlier, on July 22, in collaboration with the Berkshire NAACP, the Center set up its booth – a 10 foot by 10 foot tent with a large banner — in Pittsfield at the 44th annual Gather-In, Berkshire County’s longest running neighborhood festival designated this year as the Life Ev’ry Voice Festival to celebrate African-American culture and heritage in the Berkshires.

To contact the Berkshire Center for Justice, call 413-854-1955, or go online: https://berkshirecenterforjustice.org. The Center is located at 284 Main St., Suite 7, in Great Barrington, Massachusetts.