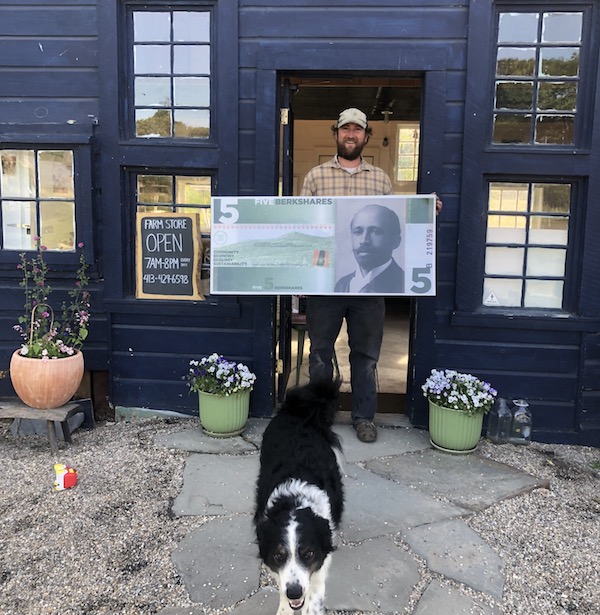 Great Barrington — Sean Stanton didn’t grow up wanting to be a farmer. In fact, he fell into it by happenstance. Following his graduation from Monument Mountain Regional High School, Sean joined the Coast Guard, fulfilling a dream of service on the seas. Though he set out for a lifelong commitment, after four years he realized it was not so much his country he wanted to serve as it was his community. Once back at home, while figuring out his next move, Sean found himself indebted to local farmer Dominic Palumbo through what Sean describes as a “backdoor deal” for fresh milk. To pay off his debt, Dom suggested Sean help with farm chores at Moon in the Pond Farm. Ten shifts later (and debt-free), he decided to start his own farming business.

Since the onset of the COVID-19 pandemic, Sean and his partner, Tess Diamond, have had to dramatically shift the nature of their operations. Prior to March, 60% of NPF’s products were distributed to restaurants at a wholesale price. Now, direct-to-consumer sales account for about 90% of their business through their on-site farm store, which Tess has transformed into a full-diet grocery store to meet the needs of the community during the pandemic. In addition to their milk, eggs and meat, Tess has curated a selection of locally produced vegetables, ferments, yogurt, cheese, coffee, grains, bread, granola and maple syrup. They even have face masks available. To accommodate all shoppers, they offer curbside pick-up and delivery.

While it’s been challenging to navigate the changes, they are confident that the flexibility of their business model will allow them to be resilient. As an advocate of sustainable and regenerative food systems, Tess is excited about the media attention to the current state of industrialized agriculture and shortcomings of global supply chains. “Consumers are experiencing a moment of reckoning,” she said. “It’s hard to overlook that the system is so fragile and disconnected from the real cost of cheap meat.”

They also view it as an opportunity to cultivate economic self-reliance with the creation of new businesses. Sean and Tess see an immediate need for additional livestock farmers, locally grown grain and, most importantly, a slaughterhouse. Sean points to agricultural cooperatives and the ability to aggregate products and market them collectively as an inspiration and opportunity for collaboration here in the region.

For Sean and Tess, farming is a tool for community engagement, a quality they also recognize in BerkShares. As one of the initial participants, NPF has championed the idea of voting with your dollars or BerkShares. Sean stated, “You just can’t get that with a debit card.”