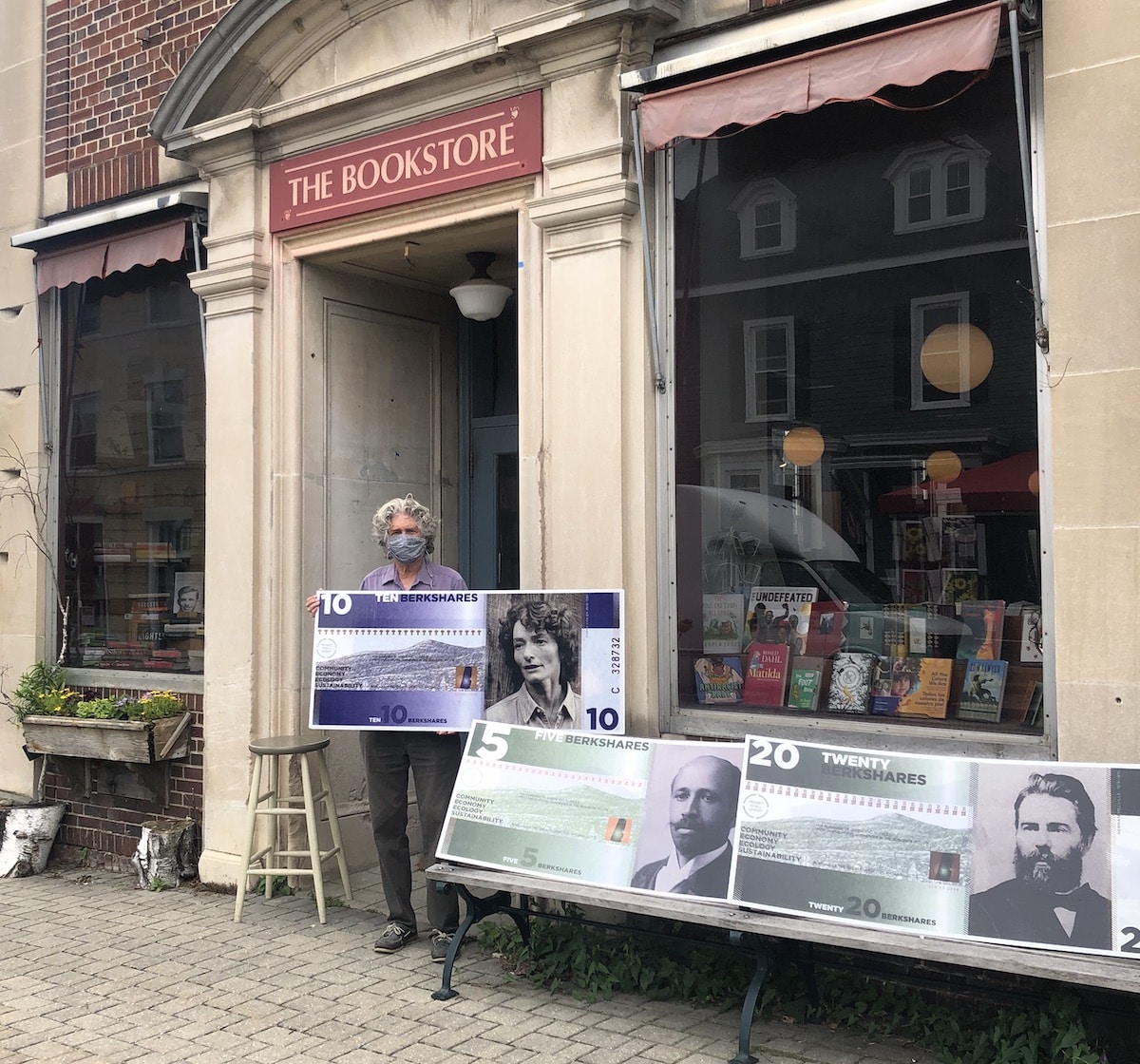 Matt Tannenbaum, owner of the Bookstore, displays a BerkShares note in front of his shop in downtown Lenox. Photo courtesy Schumacher Center for a New Economics

Matt Tannenbaum is a proprietor of stories and a pretty good storyteller himself, but what he really loves is hearing about how much his customers enjoyed reading a new story. He got his start in the book world as a stock clerk at Gotham Book Mart in New York City’s 47th Street Diamond District, a legendary shop and literary hotspot founded in 1920 that welcomed the likes of Saul Bellow, J.D. Salinger and Allen Ginsberg, and housed the James Joyce Society. A sign overhanging the door read “Wise Men Fish Here.” It was there that Tannenbaum was mentored by owner Frances Steloff, an incredible storyteller in her own right, who shared an adage on bookselling that has stuck with him all these years: “We don’t sell books, we offer them for sale.”

It’s this key distinction that has inspired Tannenbaum’s approach to curating The Bookstore for the past 44 years. Wandering the stacks of 20th-century classics, history and beach novels is like a scavenger hunt for hidden gems like a precious poetry collection, a rare copy of a first-edition book, or something unexpected like a book about tropes. Tannenbaum describes this approach as selling new books in a secondhand-book fashion. He typically chooses books based on their publisher, opting for the less-commercial publishing houses to further differentiate his offerings, and he intentionally defies the retail practice of pulling inventory that doesn’t sell quickly.

Selling books in the digital era is difficult. Tannenbaum admits he was slow to recognize the cultural shift, but it became apparent when he encountered his longtime customers on the street and realized they were no longer shopping with him. Speed and convenience are contrary to the act of reading, Tannenbaum argues. He knew he could not compete on this level, but he continues to remain relevant and unique in other ways. In 2010 he opened the Get Lit Wine Bar in the poetry wing of the store that offers the perfect setting for poetry readings and author events with local writers or for musing over thoughtful prose.

He feels consumers ought to take responsibility for the loss of local commerce and the emergence of corporate conglomerates that snuff out small businesses. Tannenbaum says his daughter Sophie accurately describes this hypocrisy: “You’re not in traffic, you are traffic.” He adds that it’s a pleasure to be cognizant of your actions and not judge yourself, but to shift your awareness into action when you recognize wrongdoing. He sees BerkShares as a way to mobilize thought into action. Regarding his decision to accept the local currency, he said: “it’s a cool, local, Berkshire idea. And so am I.”

Although the store is operating at limited capacity through curbside pickup, the COVID-19 pandemic has been kind to book sales and has opened up opportunities for self-education. Tannenbaum notices people picking up the classics they’ve been meaning to read their whole lives. They’re reading books on race and politics. Another positive externality of the pandemic is that people are expressing gratitude for the things they once took for granted. Tannenbaum acknowledges the mutually beneficial relationship with his loyal customers, saying, “as much as they support the Bookstore, we support their cultural and intellectual life.” There is so much a story can teach us about ourselves (and books are often cheaper than therapy). Next time you’re in need of a pick-me-up, visit Matt Tannenbaum at The Bookstore and call it an act of self-love.

In the age of Amazon, bookstores are an endangered species, but as consumers, we have the power to prevent them from going extinct. Recently Tannenbaum posted a fundraiser to “Save The Bookstore” and the community came out in full force. Within 48 hours The Bookstore had exceeded its initial goal of raising $60,000. Within three days, it had surpassed $100,000 from 900 donors. Contributors include one-time book buyers, regular shoppers, locals, visitors and everyone in between. Even those who haven’t visited the Bookstore but know of its reputation have contributed. If you are able, please consider donating.