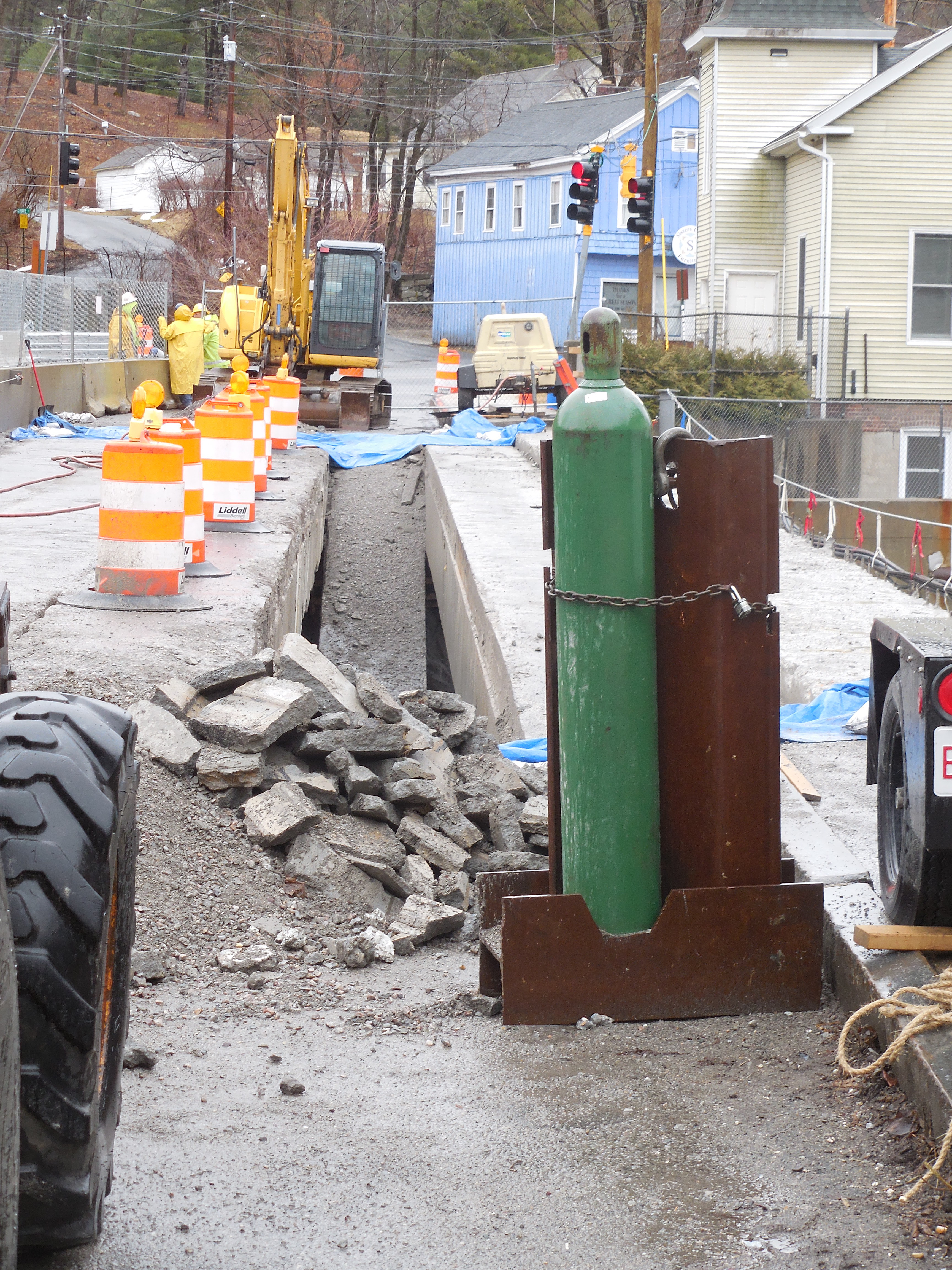 Housatonic — A portion of the Route 183 bridge over the Housatonic River has collapsed, causing its complete closure at least through Friday, April 7, “in order to allow MassDOT engineers to safely evaluate the condition of the bridge beams,” MassDOT spokesman Patrick Marvin said in a written statement.

In an email this morning, MassDOT Resident Engineer Rich Miskinis said: “Unfortunately an emergency closure of the bridge occurred this morning due to a safety concern. Information is preliminary at this point but the bridge will be closed for at least a few days.”

Workers at the site confirmed that a beam had collapsed on the southern flank of the bridge sometime this morning. Indeed, a chasm of three feet or more could be seen running the length of the southern side. A pair of concrete strips surrounding the beam had fallen into the river, forming a V-shape whose lower portion disappeared in the roiling waters on a rainy day.

“These operations are necessary to ensure public safety as MassDOT discovered additional deterioration while preparing beams for removal on the closed section of the bridge as part of an ongoing construction project,” Marvin said.

MassDOT has implemented a traffic management plan that includes variable message boards to inform the public, including one at the intersection of Route 183 and Route 7 (Stockbridge Road).

The Park Street Bridge is currently under construction and had been reduced to one lane anyway, although the pedestrian walkway on the northern flank still remains open after the mishap. The bridge, which was built in 1969, was deemed by MassDOT in a recent report to be “structurally deficient and functionally obsolete.”

The bridge spans the Housatonic River and consists of a single 104-foot span, 40 feet wide curb-to-curb, with concrete abutments and wingwalls, and precast concrete box beams. Local historians say it is not historically significant.

Among its deficiencies, MassDOT found, is beam deterioration, poor load posting, a tight horizontal curve on the eastern approach and no sidewalk on the northeast approach. Water seeped through the joints in the decking, which accelerated the bridge’s problems and resulted in icicles forming underneath during the winter months.

A recent inspection report rated both the deck and the beams a 2 out of 10 or “critical” with the substructure rated 7 or “good.” When completed, the new bridge will have an estimated lifespan of 75 years. The estimated cost of the project is $3.4 million, MassDOT said two years ago at a public information meeting.