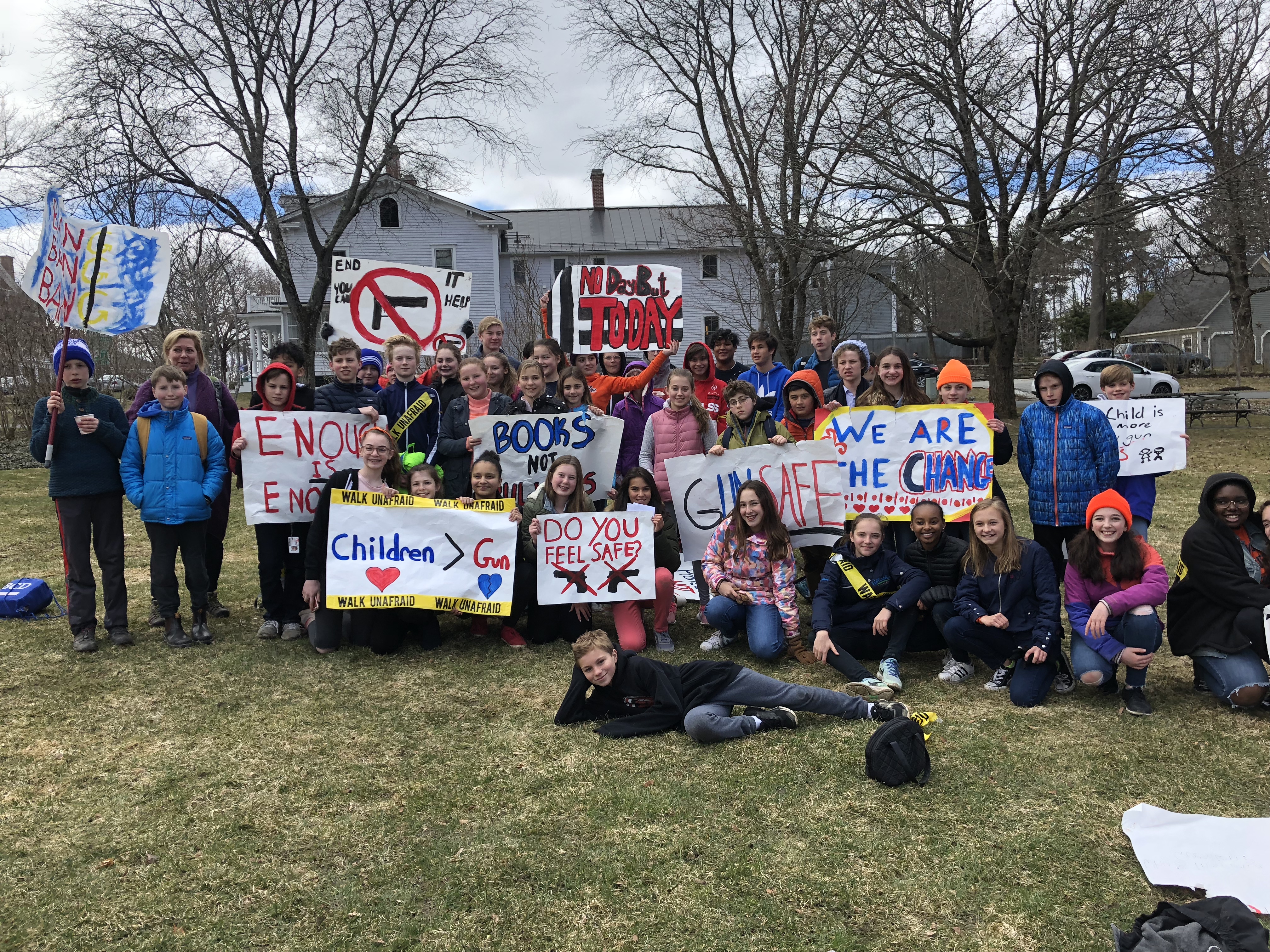 Lenox — On this blustery cold spring morning, Friday April 20, the campus pond at Berkshire Country Day School in rural western Massachusetts seemed light years away from Marjory Stoneman Douglas High School in Florida or from Columbine High School in Colorado. A pair of Canada geese were patrolling the pond’s rippling surface that reflected the cloud-driven sky. Still, the presence of those far away suburban schools in Florida and Colorado was very much in the air.

With the encouragement of their teachers, the BCD students had organized a walkout program, joining with thousands of students nationwide to protest the epidemic of gun violence nurtured by tolerance for the availability and accessibility of weapons of mass murder. Gun violence in schools and the slaughter of school children has become a weekly affair. So far in 2018 there have been 20 school shootings, an average of 1.25 per week. For these students their lives are at stake; after all, it’s their show. Indifferent adults have put them at risk.

At 10:30, 47 sixth through eighth graders from the BCD upper school left their classrooms, crossed campus and stationed themselves around the pond. This was  the very date of the Columbine shooting — 12 students and one teacher dead, 21 injured — 19 years ago.

But there was a more recent, and painful, episode that had generated nationwide outrage. On Valentine’s Day, nine weeks ago, 17 people were shot to death at Marjory Stoneman Douglas High School in Parkland, Florida — 14 students and three teachers and coaches dead, and another 17 injured. This horrific massacre had prompted marches and demonstrations around the country, calling for effective gun control measures and culminating in the April 20 nationwide student walkout

The BCD students stood at the edge of the water, waiting in silence. Music instructor Charles Zotique struck a gong, the first of seventeen such strokes, one for each victim in this year’s Florida massacre. After each toll, one of the students read aloud the name and a description of one of the victims — seventeen times, around the pond.

After the ceremony, students gathered in the school driveway, and accompanied by a Stockbridge and then Lenox police cruiser, walked the two and half miles, north up Route 183 past Kripalu, past Tanglewood, to Lilac Park in the center of Lenox. They carried signs, banners and not a few were wrapped in yellow caution tape with the message: ‘Walk unafraid.” Along the way they chanted “Hey, hey, NRA; How many kids have you killed today.

At Lilac Park the students gathered around a portable loudspeaker, and for an hour read their reflections on the violence insinuating itself into the fabric of the country’s student life.

And here is what they said:

We place them in the hands of Americans and say,

The inevitable senseless violence that follows

is succeeded by senseless silence.

But never do we shed a tear

for that which could have been prevented.

A finger pulls the trigger.

A brain commands it to do so.

Yet the bullet ejected is what steals the breath,

the rhythmic beating of the chest.

All actors in the tragedy, the farce, the drama:

Yet the bullet brings the curtain down.

Once or twice a year, my mom and I talk about what I would do if I heard gunshots. Where I would hide. Being small I could fit under the seats at a movie theatre, but now that they are all becoming recliners, I don’t know where I would go. I can crawl into cabinets or hide behind furniture. We talk about not helping anyone as hard as it may be and staying hidden until it’s safe to come out. Fear of being shot is always in the back of my mind when I am in a crowd and it shouldn’t be. I should be able to go to the movies with no fear. I should be able to go to concerts with no fear. I should be able to live my life with no fear of being shot by a stranger.

Everyone knows the dangers of one person with a weapon, but even after we hear the news over and over again, we continue to ignore the fact that the next time it could be use. Sure, we realize the tragedy was terrible and that things need to change, but once the news has died down, we go back to our own carefree lives. All except the friends, families and loved ones of the dead or injured.

This past shooting at Marjory Stoneman Douglas High School is different from the rest. The kids of the high school are not going to let the rest of the country go back to their normal lives. They are keeping the subject of gun violence relevant and in the news, so every time you turn on the TV, it will be smacking you right in the face. It is not enough to feel bad and talk to your family and close friends about the change that needs to happen. People have to start doing something. They need to not be afraid of the challenges faced to make this change in our country.

I know that I personally can’t make a huge difference, but it’s not about that. Working together, we can force the government and our leaders to face this problem. Gun violence can no longer be ignored. The lives of Americans being taken by other Americans with guns cannot be ignored. It should be either with this protest today and hopefully many more throughout the country that we can make the needed changes that should have happened decades ago.

The fact that you were not protected

The fact that you were not able to escape the bullets

The fact that the police were too late

The fact it was you and not me

One for every one of you

Every day 289 will never sing, never balance checkbooks, never vacuum a floor, or walk on the moon,

but you tell me

that the second amendment means,

that having a weapon, a weapon designed for streamlined murder,

is your fundamental right?

Please tell me then

Where is our right to personal safety?

How do I feel safe

When I never know if I’m a walking target

Or just lucky this time?

How do I feel safe

When cars are more regulated

When mental illness is a stigma

Instead of a treatable disease,

And when checking a background

Before handing out a lethal weapon

Understand, I don’t want to take your gun away

Really, I don’t want your gun.

I just want my blood to run coursing through my veins

Not onto the pavement.

I want my children to go to school

To learn how to create,

Not how to destroy.

And I want to stop feeling

Your front page and extensive coverage of yet another mass shooting is unworthy of your paper. In America this is no longer unique. It happens every few weeks. Please relegate such matters to the interior of the paper, along with car crashes, since events like this have become an accepted part of the fabric of American life.

This will not change any time soon. The gun lobby, along with its allies in the Republican Party, has shown that it has the ability to stymie any attempt at firearms legislation. And, since it would take two-thirds of the states to ratify a repeal of the Second Amendment, this won’t happen either.

The new reality is that the mass killing of Americans by Americans is no longer news. Please stop treating it as such.

Following the slaughter of high school students in his state, Sen. Marco Rubio was quick to say that now is not the time to consider the issue of gun violence in our country. Being No. 6 on the Senate list of career recipients of NRA funding, Rubio has more than 3 million reasons to think there’s no such thing as the right time. (Colorado’s Sen. Cory Gardner is No. 5.) When will be the right time to discuss the NRA’s stranglehold on our country’s legislators? As long as the NRA calls the shots (pun intended), we the people of the United States will remain targets. The Second Amendment’s wording is awkward, but I believe it’s safe to assume that the framers of the Constitution never intended it to grant permission for citizens to gun down their fellow countrymen.

From 2003-2010 American  soldiers fired guns in Iraq. From 2001-2014 American soldiers fired guns in Afghanistan. In 1989 American soldiers fired guns in Panama. What happened after? Politicians discussed and argued. In 2018 an American citizen fired a gun in a school. What happened after? Students did not argue. Students did not sit and discuss. They stood up and marched and came together as one community. They inspired each other. They motivated each other. They encouraged each other. They stood up for one another and every other child in this country. They marched and shouted for their safety in school They made protest signs together. They chanted in the streets of busy cities to together. They raised their voices and stomped harder on the cement streets together. Their speeches, chants, signs, brought a message to America that was louder than any gun shot. So no more sitting and arguing. It is time to stand up and be heard! It is time to have a voice! It is time to change!

Today we gather and march to honor the 17 that died in Parkland, Florida.

We need to do something about this, and not just stand by and grieve once it happens. Change needs to happen.

Guns are getting into the wrong hands, and when that happens, lives are lost. It is not hard to get a gun. In all but 8 states, you can buy an automatic gun with no proof or ID.

It is harder to adopt a cat in the U.S. than it is to get a gun. This is not okay.

We can’t vote yet because we, the children and students of the future, are not old enough, but we have power. Just like the voters, we have power.

We have power of persuasion. We need to unite for this cause, and act on change by persuading the vote.

We have power. When we show our dedication, and passion for the cause of preventing gun violence, we have power. People see kids marching for a political cause and they are inspired. We need to inspire the people to represent our views, and make change.

We have power. Go home to your mom, dad, uncle, aunt, grandparents, everybody, and educate them so they can vote FOR us.

We, the children are the future of this cause. We are the secret weapon that will make change in gun violence… that will keep us safe in school.

Make sure that no more people die.

Never again will this happen. We will not let it. Enough is enough. Let’s get change! We have power!

17 snoozes and then another

17 breakfasts on the go

17 homes with an empty chair

17 bullets battled the God we trust