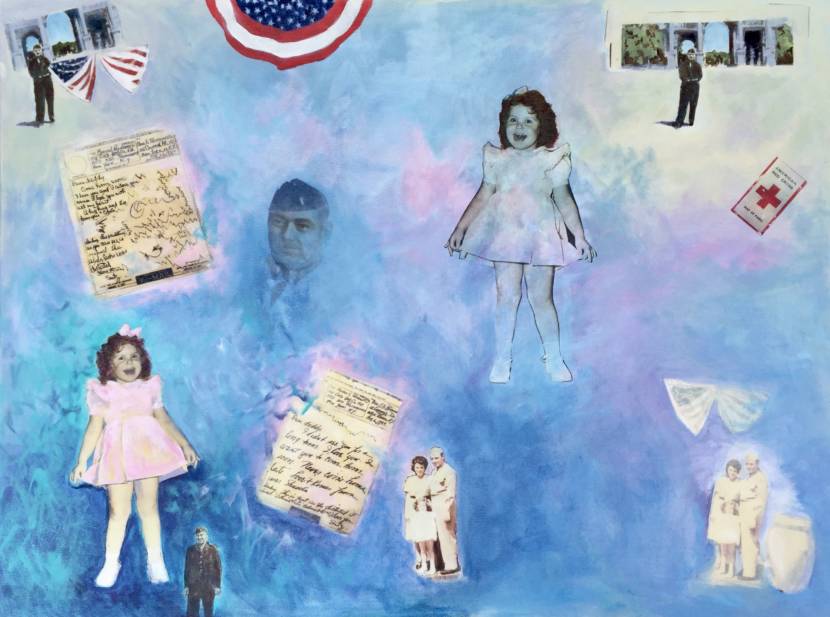 Many years ago, when she was a little girl, Berkshire artist Nina Lipkowitz discovered, in a cabinet in her childhood home, a large brown photo album brimming with small deckle-edged photos and mysterious memorabilia. There was her sister, eight years her senior, as the little girl that Lipkowitz never knew, standing as a 3-year-old with her mother and a uniformed father. Letters to her mother from Europe were full of loving expressions that she had never heard from her difficult father.

Carefully attached to one gray page was a yellow cloth star with the word “Juif” in black ink. Nina later learned that a French Jew, attending the same Rosh Hashanah service as her father after the liberation of Paris, tore it from his jacket and presented it to her father in tribute.

Nestled between the pages was a copy of the GI newspaper “Stars and Stripes” with the headline “HITLER DEAD” emblazoned across the front page. Nina found playbills from her father’s leave in London, and photos of the first concentration camp liberated by the U.S. Army as well as other events in which her father participated as a member of Patton’s 3rd Army.

Nina also found pasted in the album a paper documenting her father’s discharge to a hospital, which she realized only later was a psychiatric facility for the treatment of battle fatigue, the term at the time for war trauma or what we now know as post-traumatic stress disorder or PTSD.

Her father never spoke of these experiences. It wasn’t until about a year ago, when she became concerned that this treasure might fall apart, that Nina thought about telling her father’s story and, in the process, gaining insight into this enigmatic man and her relationship with him.

That story is told visually in a stunning exhibition at the 510 Warren Street Gallery in Hudson, New York, through Sunday, Nov. 25. Using a process called photo transfer, Nina applied an acrylic medium to transfer images photographed from the album onto canvas. She painted under, over and around these images, creating a visual language that tells both her father’s and her family’s stories, and also creates an abstract emotional surround, deepening and contextualizing the literal realities of the images.

At an artist talk at the Shaker Dam Coffee House Friday, Nov. 9, Nina spoke about her own process of discovery as she searched for a way as an artist to tell this story. She had never worked with photo transfer and acrylic on canvas before. She had no idea where this would take her. She leapt into the unknown with a faith that, somehow, she would emerge on the other side with something of value both artistically and in honoring this precious history. And indeed she has.