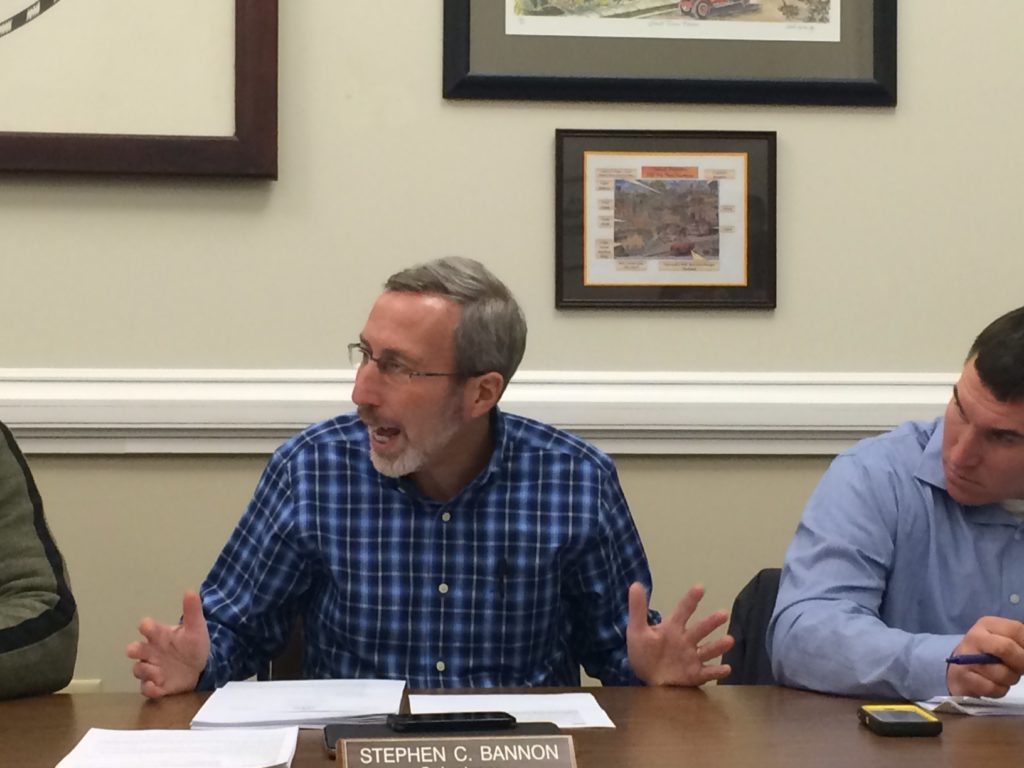 Great Barrington — The Selectboard last night (February 9) voted unanimously to give Berkshire Hills Regional School District(BHRSD) permission to form a three-town committee that would work to bring the district’s regional agreement up to date, and, if all three towns can agree, possibly amend it to change the way each town pays for the schools.

Selectboard member and school committee chair Stephen Bannon brought the motion and discussion to the table, since Superintendent Peter Dillon had arrived late from a Stockbridge Selectboard meeting where that Board also approved the formation of the committee.

Selectboards of all three towns in the district must first agree to form the committee before going any further in the amendment process. West Stockbridge is to vote on the matter at their meeting next week.

Bannon said the school committee wants to open up the regional agreement for amendment to both clean up an “antiquated,” 1965 agreement that hasn’t been modified since 1990, and “we want the towns to take a look at the funding formula.” 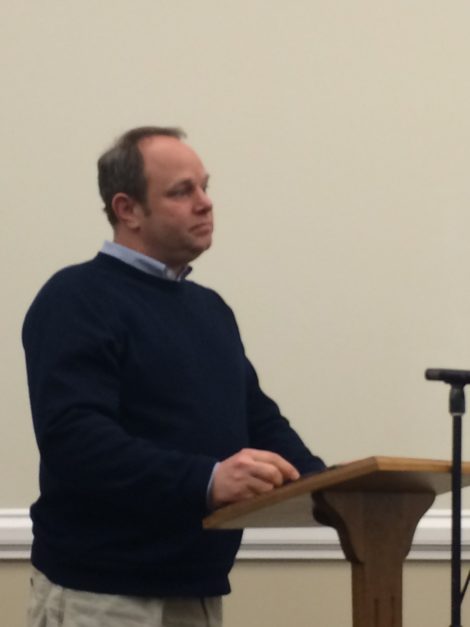 While the agreement could use a basic update, it is the formula that is driving school officials’ action now, since it was a primary factor in the failure of a vote — a second year in a row — to renovate Monument Mountain Regional High School. Great Barrington was to foot the bulk of the renovation bill, $19 million of the $28 million net cost, had the project passed last November, but the town’s taxpayers revolted partly over what was perceived to be an unfair district agreement formula that shunts most of school costs onto Great Barrington.

Each town, however, is assessed based on how many students are enrolled in the district. The official October 1, 2014 (updated in early December) enrollment numbers show 690 students from Great Barrington, 145 from Stockbridge, and 148 from West Stockbridge.

For fiscal 2015, the towns were assessed as follows: Great Barrington, 69 percent; Stockbridge, 14 percent; and West Stockbridge 17 percent. Fiscal 2016 assessments are to be close to 2015 assessments.

It is unclear how the agreement might be changed. Neighboring Southern Berkshire Regional School District, for instance, is on a statutory system, which means that “the state determines how the pie will be cut up,” said Superintendent David Hastings. The two largest variables in the calculation, he added, are “relative wealth in each community and the proportionate enrollment in each community.”

Southern Berkshire is made up of five towns, Sheffield being the largest, and bearing the highest percentage of all, which now is at 53-percent.

He said there can be “a winner and a loser each year because in a small town like Monterey, two or three students can make a significant difference” in the assessment. For this reason he said it is a “volatile” system.

“There’s nothing you can do about it,” he said of the calculations. “Suddenly rates go way up or way down.”

Of the “intense calculation,” made to determine how much a town pays, Southern Berkshire’s Business Manager (and Egremont Selectboard member) Bruce Turner said “the main driver is student population.”

“No matter what changes,” he said, “Sheffield is still the biggest community, they have the most kids and the most property value. There’s not much you can do about that.”

Some Great Barrington residents are trying to figure out what can be done to take some of the weight off the town in order to afford a renovation, since there is nearly unanimous agreement that the high school is in dire straits. In a widely circulated analysis and letter by resident Chip Elitzer, written while the town was still sorting through the wreckage from the contentious battle over the project, he states: “I found that GB has only 53 percent of the combined $2.5 billion assessed property values (residential, commercial, industrial, and personal property) of the three towns, but because it provides almost 70 percent of the resident student population, it gets hit with almost 70 percent of the BHRSD assessment.”

Fairness, Elitzer said, “would include allocation based on each town’s share of total assessed property value rather than on its student enrollment, and reimbursement for the true average (not marginal) cost of choice and tuition-in students, which is approximately three times greater than the current rate.”

The regional agreement was one of several taxpayer irritants –– along with school choice and tuition-in students –– that sunk the renovation of the deteriorating high school. After the vote failed, a group of Castle Hill neighbors formed a petition called GB21, a list of actions the group insists be undertaken before any further attempts at a renovation project are made. One of those was to renegotiate the district agreement for “equity” between the three towns. As of two weeks ago, GB21 had more than 150 signatures. Several of its members have presented the petition to the Selectboard, Finance Committee, and School Committee. 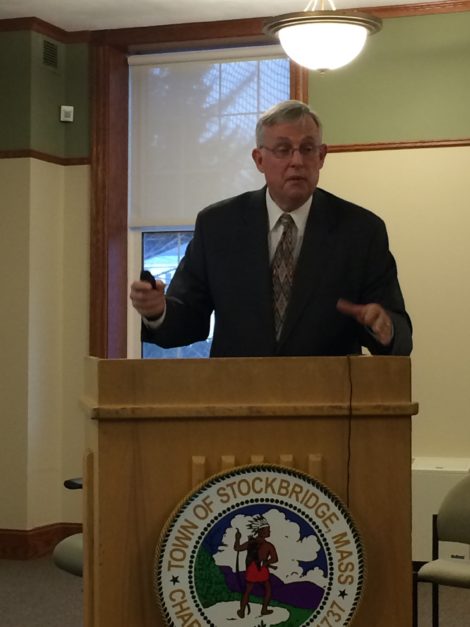 Stephen Hemman from the Massachusetts Association of Regional Schools speaks to a packed house in the Stockbridge Selectmen’s meeting room last November.

Amending a regional agreement is a “strict process” with a number of steps, Bannon said, that, according to Stephen Hemman, Executive Director of the Massachusetts Association of Regional Schools (MARS), can take up to a year or more. Bannon added that Hemman suggested a facilitator and legal help throughout.

Dillon had asked Hemman to come to Stockbridge last fall to give a presentation on the process, which begins by forming a “Regional Agreement Amendment Committee.”

Dillon said last night that he had received numerous letters from people who want to join the committee, which could have as many as 30 appointed members, since MARS suggests that it have a member from each the School Committee, Selectboard and Finance Committee from each town; a town administrator or town manager from each town; and the “public at large” from each town, as well as the Superintendent and business manager.

The committee then must agree unanimously to changes, otherwise the existing agreement remains in place “unlike a labor agreement,” Dillon said. He added that he sees a committee forming this spring and convening in September to come up with changes to the agreement to be voted on at the three town meetings next year. The school committee, the Commissioner of Education, and all three towns would then have to agree to adopt the amended agreement.