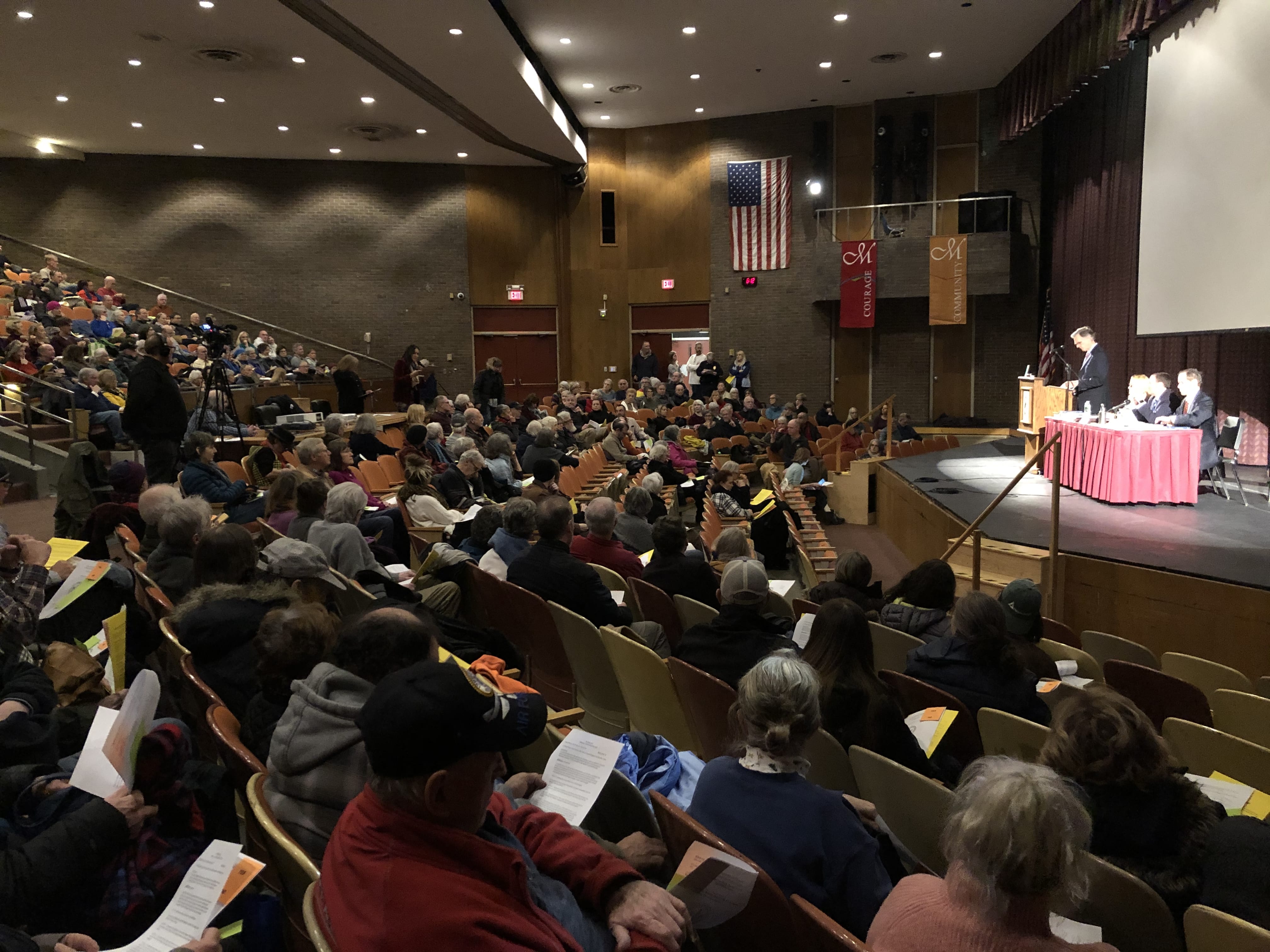 At the citizens' microphone Janel Munoa accompanied by Barbara Kellogg, members of Citizens Concerned About GB Horse Racing, address the special Great Barrington Town Meeting considering their home-rule petition to give town voters the right to decide whether horse racing can be re-introduced at the Great Barrington Fairgrounds. Standing at the podium is Town Moderator Michael Wise. Photo: David Scribner

Great Barrington — At a special town meeting at the Monument Mountain Regional High School auditorium Wednesday evening (December 11), almost 300 residents overwhelmingly passed a warrant item on a home-rule petition requesting Great Barrington’s representatives in the state legislature to introduce legislation requiring approval of a horse racing license at both an annual town meeting and by a majority ballot vote.

About 10 people spoke, most in favor of the motion, though some strayed from the topic and addressed the issue of the appropriateness of horse racing in general.

Janel Munoa, a West Street resident and a petitioner for the home-rule petition, explained the process by which the petition will give the town the right to hold a town meeting and a ballot question so that residents can decide whether racing returns to the Great Barrington Fairgrounds, or any other venue in town.

See video below of the special town meeting to consider the home rule petition. Janel Munoa begins the presentation of the petition against horse racing, followed by Barbara Kellogg, and several others:

There is no proposal currently before the town but Sterling Suffolk Racecourse has reached a lease agreement with fairgrounds owners Bart and Janet Elsbach to bring thoroughbred racing back to Great Barrington for up to 40 days in the months of September and October with the goal of starting in 2020, though that timeline seems unlikely at this point. The company expects to spend between $15 million and $20 million on the project.

But in order to accomplish that feat, Suffolk needs a change in state law to permit it to hold races in Great Barrington while at the same time allowing it to maintain its simulcasting and remote betting operations back in East Boston. That’s one of the reasons for proposed legislation, which has been referred to the Joint Committee on Consumer Protection and Professional Licensure and is still pending on Beacon Hill even without the sponsorship of state Sen. Adam Hinds, who withdrew his support earlier this year.

Munoa cited concerns about “traffic, infrastructure, environmental and animal welfare, gambling and economics and the democratic process being thwarted by the legislation in Boston.”

Barbara Kellogg, a member of Citizens Concerned About GB Horse Racing, which organized the petition, pointed out that the item on the special town meeting warrant is not about approving or disapproving of horse racing. Kellogg explained the process by which the petition would go to Boston for consideration by the legislature. Click here to read an op-ed she wrote for The Edge with fellow organizer Pam Youngquist, and click here to view a flyer they handed out at the door.

Leigh Davis, who is in her first year as a member of the selectboard, took an interest in the subject when she heard that the legislation was proposed earlier this year.

“This is not about horse racing; it’s about local control,” Davis said. “It’s about taking our destiny into our own hands.”

Two residents, Laura Keefner and Charles Plungis, spoke in favor of a return of horse racing to Great Barrington. Keefner lives on Reed Street adjacent to the fairgrounds. She described the derelict fairgrounds as “a dump.”

“Suffolk downs wants to come in and spend up to $20 million to fix it up,” Keefner said. “I don’t see why you people have a problem with that.”

George Beebe, a conservative firebrand who has been absent from town meetings for several years, came to tonight’s meeting with a message. As a farmer, he is generally in favor of the rights of people to use their property as they see fit. But he said the town has changed dramatically and he sees traffic as one of the culprits.

“The traffic in this town is absolutely horrendous,” Beebe said. “Why do we need another event that will choke that end of town?”

But it was Matt Rubiner, who owns Rubiner’s Cheesemonger and cafe on Main Street, who brought down the house with a diatribe against the return of horse racing. Fast forward to 25:00 in the above video to see his brief but lively speech.

Rubiner called it “stunning, bizarre, and surreal that we are even considering the return of horse racing to this town.” He called horse racing “cruel” and described Suffolk Downs as “a third-rate bankrupt operation that couldn’t even keep their own track alive.” It will bring nothing but “animal abuse and traffic,” Rubiner insisted.

“Whatever revenues come from it … will be blood money,” Rubiner predicted. “It’s disrespectful to our town and it has to be stopped.”

There was so much applause that town moderator Michael Wise had to rap his gavel.

Organizer Pam Youngquist told The Edge after the measure passed that the petition will now be sent to the two members of the state legislature who represent the town, state Sen. Adam Hinds and Rep. William “Smitty” Pignatelli.

Youngquist has said that the petition will be taken to Beacon Hill by Hinds and Pignatelli as a bill “providing that any horse racing in Great Barrington, now or at any time in the future, will require citizens to vote at town meeting and on a ballot question before horse racing can ever come to town.”