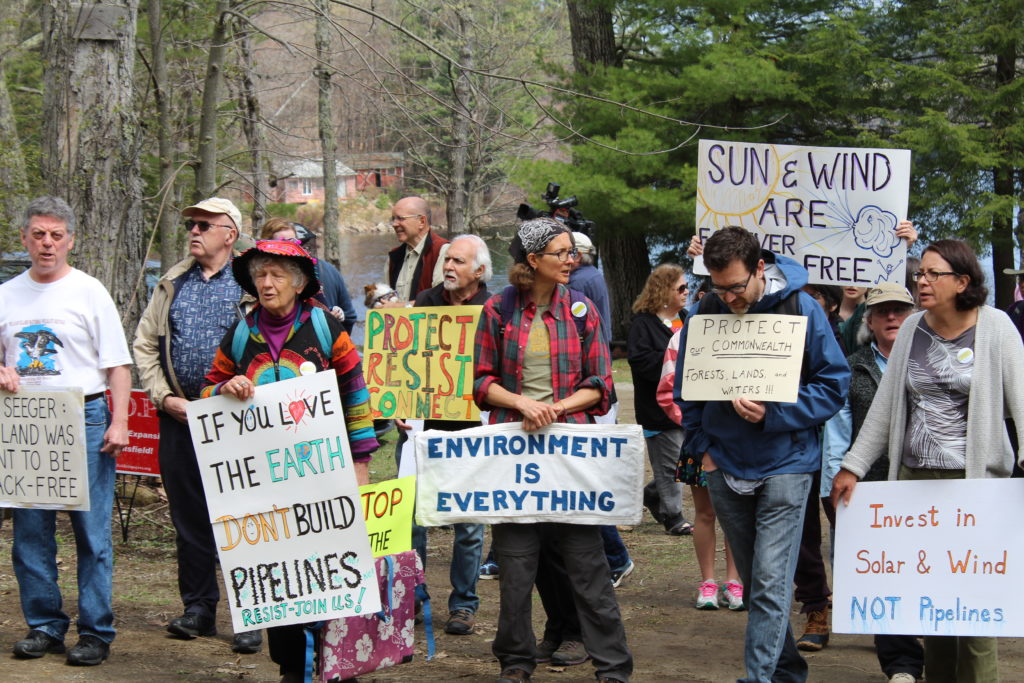 Great Barrington — Joining 22 other communities across the state, the Great Barrington Board of Health has signed and endorsed a strongly worded letter to Gov. Charlie Baker concerning the health impacts of any new or expanded fracked natural gas infrastructure in the state.

The letter cites state health commissioner Monica Bharel’s goals for her agency, which include combating health disparities, promoting health and making “the best use of our resources in that endeavor.” 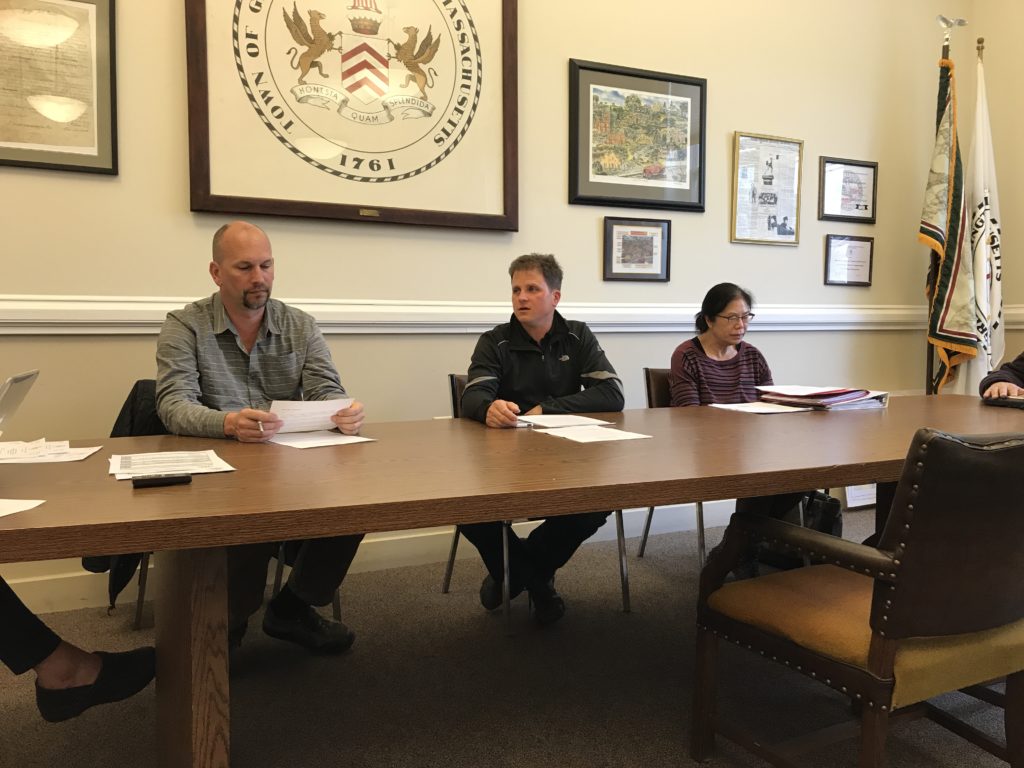 “We are concerned that the rush to develop fracked gas infrastructure is in direct conflict with those goals,” the letter reads. “It increases health disparities and makes poor use of our healthcare resources by potentially creating public health problems instead of preventing them.”

“The biggest issue is the link to fracked gas,” said Michael Lanoue, who chairs the Great Barrington health board. “That’s the number-one issue that resonated with me.”

Lanoue noted at Thursday’s board meeting (June 1) that “other towns have signed onto it” and the letter “sends the right message. It’s not overreaching.”

Fracking is the process of injecting liquids, including potentially toxic chemicals, at high pressure into subterranean rocks and boreholes in an effort to force open existing fissures and extract oil or gas.

The letter makes a compelling case that the extraction and transport of fracked oil and natural gas poses a threat to public health. While extraction via fracking “is widely recognized” to cause health problems because of the air and water pollution it causes where the drilling is done, “many people are not aware that the toxins and carcinogens that travel with the gas … can be emitted when there are releases of gas unintentional or intentional, anywhere along the pipeline infrastructure,” the letter states.

The topic is of particular interest to residents and activists in Berkshire County, where energy companies have been active in proposing and building natural gas pipeline projects. Most recently, protesters were arrested last month in the Otis State Forest, where workers for Tennessee Gas Pipeline Company, a unit of Kinder Morgan, have been using heavy equipment for tree cutting in preparation for the construction of a controversial pipeline extension to Connecticut.

And in the face of stiff opposition and reduced demand for its natural gas, Kinder Morgan last year pulled the plug on further work on a 188-mile pipeline project slated to run from the Albany, New York, area east through Berkshire County to Dracut on the New Hampshire border. But the company did not altogether abandon the proposed Northeast Direct (NED) pipeline that would convey fracked natural gas to ports along the Eastern Seaboard for export to Europe. Rather, Kinder Morgan “suspend” the project, leaving open the possibility it may revive the pipeline construction should circumstances change. 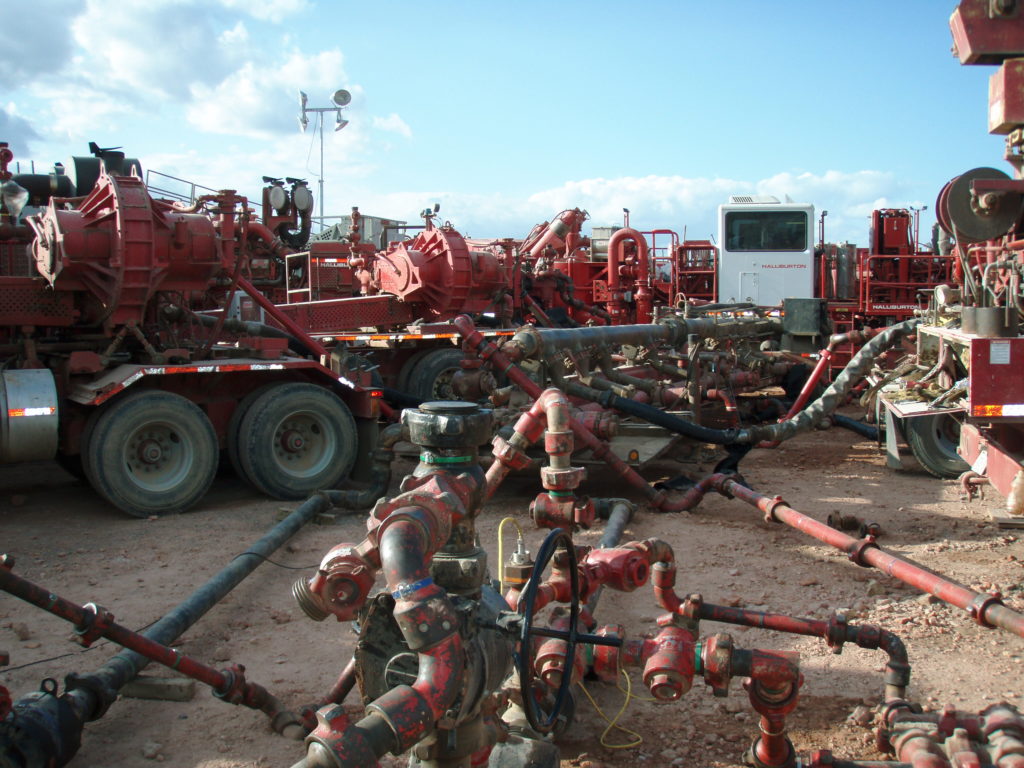 A Halliburton fracking operation in the Bakken Formation, North Dakota

Members of the town health board originally received the letter from the Sierra Club early last month and reviewed it at that time. After a brief discussion, Lanoue asked Rebecca Jurczyk, the health secretary, to get more information.

At Thursday’s meeting, Jurczyk returned with a list of questions she gave the Sierra Club and answers she had received just that afternoon. Board of health member Dr. Ruby Chang, a pediatrician by training, looked at the letter and the Sierra Club’s response to the board’s questions and agreed with Lanoue’s assessment of fracking.

“I think we should sign it,” Chang said of the letter. “We know there are huge health risks associated with fracking.” The third member of the board, Peter Stanton, also concurred.

Told by The Edge on Friday of the Great Barrington health board’s endorsement of the letter, Emily Norton, chapter director of the Massachusetts Sierra Club, pronounced it “great news.”

In an interview, Norton said the Sierra Club’s opposition to fracked natural gas has not changed its focus from environmental to public health. Rather, the latest emphasis on public health is part of a multi-pronged strategy.

“The Sierra Club is opposed to additional fossil fuel infrastructure out of the widely held scientific view that we must move as rapidly as possible away from fossil fuel energy, and that if we don’t, human society will face cataclysmic impacts in the form of sea level rise, drought, heat waves, extreme storms and the spread of tropical disease, to name a few,” Norton explained.

“So it’s a matter of the environmental but also public health, national security and cost,” Norton said, adding that the clean up of Hurricane Sandy in 2012 was estimated at $60 billion.

Norton also pointed to an alarming article in the New Republic last year by renowned environmentalist Bill McKibben in which the author cites startling statistics about “how much of the fossil fuel in the world’s existing coal mines and oil wells we can burn if we want to prevent global warming from cooking the planet.” 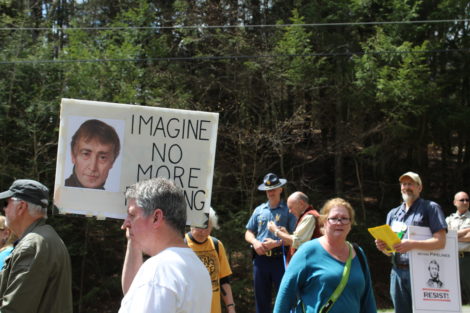 In Otis State forest Bill Kitchen of Johnstown, N.Y., holds up a sign that ‘imagines’ what John Lennon would have said about fracking. Photo: Terry Cowgill

Sean Stanton, who chairs the selectboard and is health board member Peter Stanton’s brother, told the Edge he had not yet seen the letter but, when apprised of its contents, said it “sounds like a good idea.”

“I generally agree with where he’s coming from,” Sean Stanton said of his brother.

Sean Stanton noted that boards of health have a different power structure than most other town boards and commissions, so the health board would not be obliged to consult with the selectboard or any other body before signing such a letter.

Indeed, Massachusetts Association of Health Boards’ executive director Marcia Benes noted in an Edge interview that, like other health boards across the state, Great Barrington’s derives its authority not from the town but from the state Legislature.

Local members of boards of health are elected or appointed to represent the public health concerns of the community. They have specific broad powers to adopt regulations and enforce them to protect the health of community and they “uniquely act as a local arm of the Legislature,” Benes said.

“Since boards of health are better educated on health matters than the average citizen, they can have a moral responsibility to act if they believe an action may harm the local public,” Benes explained.

Most recently, the Tri Town Health Department, which serves Lee, Lenox and Stockbridge, enacted bans on single-use plastic shopping bags and raised the legal age for purchasing tobacco products. The move did not require a vote by the selectmen or by taxpayers at town meeting.

The same kind of plastic bags were banned in Great Barrington in 2013 but officials elected to put the proposal on the warrant for the annual town meeting, where it passed by a wide margin.

Indeed, the city of Boston went a step further. The Boston Public Health Commission has written Baker to ask him to drop his support for new natural gas pipelines until state and federal agencies conduct comprehensive analyses to measure the pipelines’ effects on the climate and human health.

As for the Sierra Club letter signed by health board members, Sean Stanton, chair of the Great Barrington Selectboard, added, “I wish they would also comment on the president’s decision to back out of Paris climate treaty and tell the governor to continue as if the treaty is still in place.”

Later in the day, Stanton got his wish — sort of. Baker put out a statement assuring Bay Staters that, “Despite today’s announcement [from Trump], Massachusetts is aggressively working to exceed the goals of the Paris Agreement on the state level, while growing our economy through clean energy innovation and environmental stewardship. In Massachusetts and around the world, climate change is a shared reality and our ability to rise and respond to this challenge will shape future generations.”

— Napoleon Bonaparte
Read next: Larkin About In America: Teen readers, hope for the future