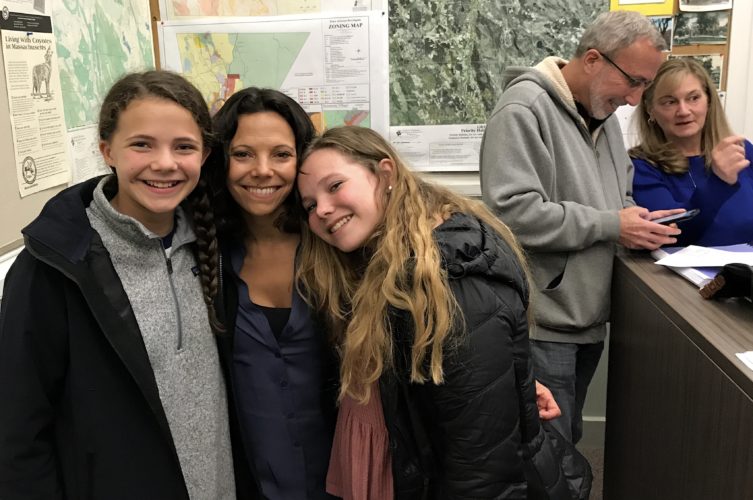 For the first time in at least six years, there will be not be a resident of the Housatonic section of town on the selectboard as incumbent selectman Dan Bailly was soundly defeated in a three-way race for two seats. Click here to view the unofficial results.

Incumbent Steve Bannon was re-elected, while challenger and former finance committee member Leigh Davis won a seat. Bannon, now elected to his fourth three-year term, was the top vote-getter at 815, with Davis receiving 767 and Bailly, a Housatonic native, 556.

“I’m very happy and thrilled to have people support me as they did and I will work very hard,” Bannon said in a brief interview in the offices of Town Clerk Marie Ryan, where the results were announced at about 8:45 p.m. “I always thought this was going to be a tight race. There’re two good opponents and the voters couldn’t make a mistake in this one. Any two of the candidates would have been good.”

In Ryan’s office with her two daughters, Davis acknowledged working very hard on the campaign. She noted that six years ago after winning her seat on the finance committee she was in town hall with her family just as she was tonight.

Davis said she got out and met lots of new people after announcing her candidacy earlier this year and that accounts for much of her success.

“Part of it is meeting a lot of new people that I never met before and having questions given to me that I had to actually explain myself and explain my platform,” Davis told the Edge. “I’ve been working really hard on economic development and that’s my key platform … and working on affordable housing and making sure the quality of life we have here remains.”

“Basically, it’s just to do the right thing and to really serve the community that I love, having been here now for 10 years,” Davis added.

With that, Ryan swore in both Bannon and Davis, along with newcomer Meredith O’Connor, who won a convincing victory for a seat on the finance committee. In a three-way race for two seats, O’Connor was the top vote-getter with 806 votes, while Tom Blauvelt won 731 and Buddy Atwood received only 506 in an unsuccessful bid to return to the committee.

The only other contested seat was for housing authority, where challenger Eileen Mooney trounced incumbent authority chairperson Karen Smith 703-451. All other races on the ballot were uncontested.

A Proposition 2½ override also passed by a margin of 692-402. The measure will allow the town to raise the tax levy enough to address building improvements to the former Housatonic School, the transfer station, the Housatonic fire station, the police station and Town Hall.

Ryan said Great Barrington has 4,746 registered voters, with 1,235 voting today. That’s a turnout of about 26 percent.