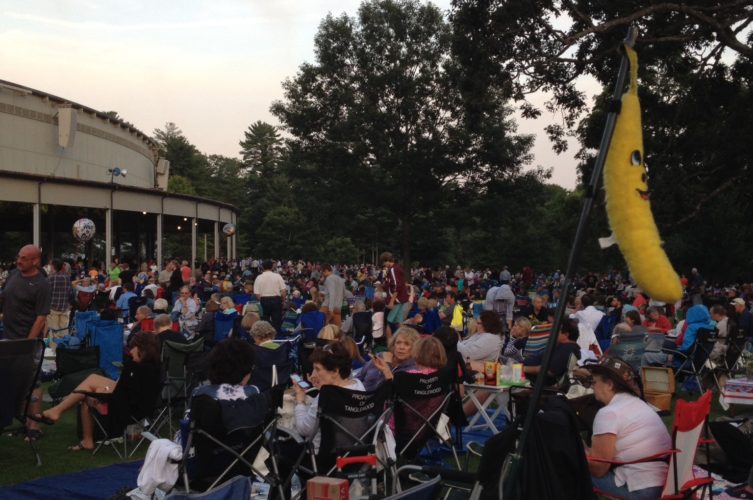 Lenox — “Just look for the banana,” I tell my friend. She’s on the Taconic Parkway, and we’re meeting on the lawn for a picnic before the Friday night concert. “A banana? What kind of a banana?” Of course, she’s thinking of a real banana, the kind you put on cereal in the morning.

“I can’t explain it. It’s a banana. It’s the only banana at Tanglewood.” We estimate a time for our rendez-vous and hang up. I can imagine her trying to explain the conversation to her husband.

It’s a 13-inch-long toy banana, with big eyes and a red mouth. It’s been around for a long time. I lived in the city back in the early 80’s. Like many others of my generation, I was a workshop junkie. Once a week, I’d stay late at work, eat a sandwich at my desk and take a subway to some hotel ballroom for a seminar.

On one such occasion, the workshop leader told the story of how they capture monkeys in Africa. The hunters build a wooden cage with a hole in it. They put a banana in the cage. Monkeys come by, see the banana and reach for it. While the hole in the cage is big enough for the monkey to put its hand in, it’s too small for the monkey to extricate its hand while holding the banana. All the monkey needs to do to be free is let go of its attachment to the banana. But, like we humans, they hang on to their “stuff” and are captured.

A week later, one of the seminar participants—a toy manufacturer– raised his hand early in the seminar. “I have a gift for everyone,” he said, and he passed out toy bananas to all the participants. That’s where the banana came from.

How and when it ended up at Tanglewood is a little less clear. I remember that we were connecting with friends one evening and wanted a way to signal where we were sitting. I scanned the basement and my eyes found the banana. It was perfect. Now permanently attached to a gardening pole, it goes with us every time we attend a concert, but in the early days it was more ad hoc.

We view the banana as a public service. Our neighbors on the lawn (we’re between posts 15 and 17) almost always give us a special thank you when they return from their trek to the restroom. “I never would have found my way back without it,” they emote.